Editorial[J]. Virologica Sinica, 2010, 25(4): 225-226. doi: 10.1007/s12250-010-3155-8.
Viral diseases were largely untreatable 40 years ago. The first antivirals were developed in the 1960s, mostly to deal with herpes viruses, and were found using traditional trial-and-error drug discovery methods. This was a time-consuming, hit-or-miss procedure, performed in the absence of a good knowledge of how the virus propagated. It was not until the 1980s, when the full genetic sequences of viruses began to be unraveled, that researchers began to understand the virus life cycle in detail, and exactly what chemicals were needed to inhibit the specific reproductive steps. Now dozens of antiviral treatments are available, and medical research is rapidly exploiting new knowledge and technology to develop additional therapies. However there is still no or limited treatment available for many viral infections. Viral diseases such as human immunodeficiency virus (HIV), hepatitis B virus (HBV) and hepatitis C virus (HCV) have a major threat on human health in China and throughout the world. Furthermore, established viruses are now developing resistance to available therapies making this another important area for continued drug discovery.
Review 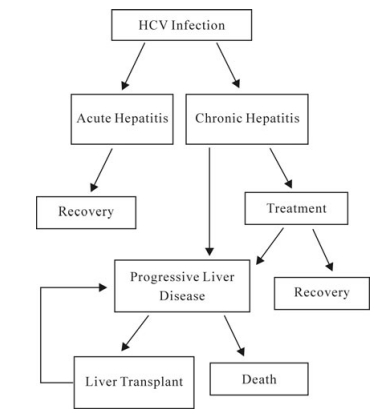 Susan L. Uprichard. Hepatitis C Virus Experimental Model Systems and Antiviral drug Research*[J]. Virologica Sinica, 2010, 25(4): 227-245. doi: 10.1007/s12250-010-3134-0.
An estimated 130 million people worldwide are chronically infected with hepatitis C virus (HCV) making it a leading cause of liver disease worldwide. Because the currently available therapy of pegylated interferon-alpha and ribavirin is only effective in a subset of patients, the development of new HCV antivirals is a healthcare imperative. This review discusses the experimental models available for HCV antiviral drug research, recent advances in HCV antiviral drug development, as well as active research being pursued to facilitate development of new HCV-specific therapeutics.

Kai Lin. Development of Novel Antiviral Therapies for Hepatitis C Virus[J]. Virologica Sinica, 2010, 25(4): 246-266. doi: 10.1007/s12250-010-3140-2.
Over 170 million people worldwide are infected with hepatitis C virus (HCV), a major cause of liver diseases. Current interferon-based therapy is of limited efficacy and has significant side effects and more effective and better tolerated therapies are urgently needed. HCV is a positive, single-stranded RNA virus with a 9.6 kb genome that encodes ten viral proteins. Among them, the NS3 protease and the NS5B polymerase are essential for viral replication and have been the main focus of drug discovery efforts. Aided by structure-based drug design, potent and specific inhibitors of NS3 and NS5B have been identified, some of which are in late stage clinical trials and may significantly improve current HCV treatment. Inhibitors of other viral targets such as NS5A are also being pursued. However, HCV is an RNA virus characterized by high replication and mutation rates and consequently, resistance emerges quickly in patients treated with specific antivirals as monotherapy. A complementary approach is to target host factors such as cyclophilins that are also essential for viral replication and may present a higher genetic barrier to resistance. Combinations of these inhibitors of different mechanism are likely to become the essential components of future HCV therapies in order to maximize antiviral efficacy and prevent the emergence of resistance.

Xin LIANG and Zhi-yuan LI. Ion Channels as Antivirus Targets[J]. Virologica Sinica, 2010, 25(4): 267-280. doi: 10.1007/s12250-010-3136-y.
Ion channels are membrane proteins that are found in a number of viruses and which are of crucial physiological importance in the viral life cycle. They have one common feature in that their action mode involves a change of electrochemical or proton gradient across the bilayer lipid membrane which modulates viral or cellular activity. We will discuss a group of viral channel proteins that belong to the viroproin family, and which participate in a number of viral functions including promoting the release of viral particles from cells. Blocking these channel-forming proteins may be “lethal”, which can be a suitable and potential therapeutic strategy. In this review we discuss seven ion channels of viruses which can lead serious infections in human beings: M2 of influenza A, NB and BM2 of influenza B, CM2 of influenza C, Vpu of HIV-1, p7 of HCV and 2B of picornaviruses. 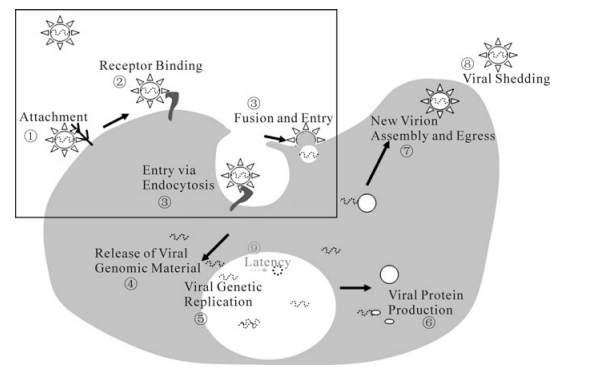 Tao PENG. Strategies for Antiviral Screening Targeting Early Steps of Virus Infection*[J]. Virologica Sinica, 2010, 25(4): 281-293. doi: 10.1007/s12250-010-3135-z.
Viral infection begins with the entry of the virus into the host target cell and initiates replication. For this reason, the virus entry machinery is an excellent target for antiviral therapeutics. In general, a virus life cycle includes several major steps: cell-surface attachment, entry, replication, assembly, and egress, while some viruses involve another stage called latency. The early steps of the virus life cycle include virus attachment, receptor binding, and entry. These steps involve the initial interactions between a virus and the host cell and thus are major determinants of the tropism of the virus infection, the nature of the virus replication, and the diseases resulting from the infection. Owing to the pathological importance of these early steps in the progress of viral infectious diseases, the development of inhibitors against these steps has been the focus of the pharmaceutical industry. In this review, Herpes Simplex Virus (HSV), Hepatitis C Virus (HCV), and Human Enterovirus 71 (EV71) were used as representatives of enveloped DNA, enveloped RNA, and non-enveloped viruses, respectively. The current mechanistic understanding of their attachment and entry, and the strategies for antagonist screenings are summarized herein.

Development of Novel Therapeutics for Chronic Hepatitis B*

You-hua XIE, Ran HONG, Wei LIU, Jing LIU and Jian-wei ZHAI. Development of Novel Therapeutics for Chronic Hepatitis B*[J]. Virologica Sinica, 2010, 25(4): 294-300. doi: 10.1007/s12250-010-3138-9.
Chronic infection of hepatitis B virus (HBV) presents one of the serious public health challenges worldwide. Current treatment of chronic hepatitis B (CHB) is limited, and is composed of interferon and nucleoside/nucleotide reverse transcriptase inhibitors (NRTI). Interferon is poorly tolerated and is only responsive in a small fraction of CHB patients and NRTIs often face the problem of emergence of drug resistance during long-term treatment. The current treatment of CHB can be improved in several ways including genotyping mutations associated with drug resistance before treatment to guide the choice of NRTIs and suitable combinations among NRTIs and interferon. It is important to continue research in the identification of novel therapeutic targets in the life cycle of HBV or in the host immune system to stimulate the development of new antiviral agents and immunotherapies. Several antiviral agents targeting HBV entry, cccDNA, capsid formation, viral morphogenesis and virion secretion, as well as two therapeutic vaccines are currently being evaluated in preclinical studies or in clinical trials to assess their anti-HBV efficacy.

Dao-min ZHUANG and Jing-yun LI. A Few Specialized Issues That Should Be Focused on Anti-HIV Drug Evaluation In Vitro*[J]. Virologica Sinica, 2010, 25(4): 301-306. doi: 10.1007/s12250-010-3139-8.
Since the introduction of antiretroviral therapy (ART), the lifespan and quality of life of patients infected with HIV have been significantly improved. But treatment efficacy was compromised eventually by the development of resistance to antiretroviral drugs, and more new anti-HIV drugs with lower toxicity and higher activity were needed. Based on the experience and lessons learned from the treatment in the developed countries, US FDA suggested that more pharmacodynamical researches should be considered ahead of the clinical trials. To facilitate the anti-HIV drug research and development, we reviewed a few specialized issues that should be focused on drug evaluations in vitro, including: 1) Mechanism of action studies, demonstrating the candidate drug’s efficacy to specifically inhibit viral replication or a virus-specific function and confirm the drug target. 2) Drug resistance studies, selecting the drug-resistant variants in vitro and determining the activities inhibiting HIV isolates resistant to approved antiretroviral drugs of the same class. 3) Antiviral activity in vitro in the presence of serum proteins, ascertaining whether an investigational product is significantly bound by serum proteins. 4) Combination activity analysis, evaluating in vitro antiviral activity of an investigational product in two-drug combinations with other drugs approved.