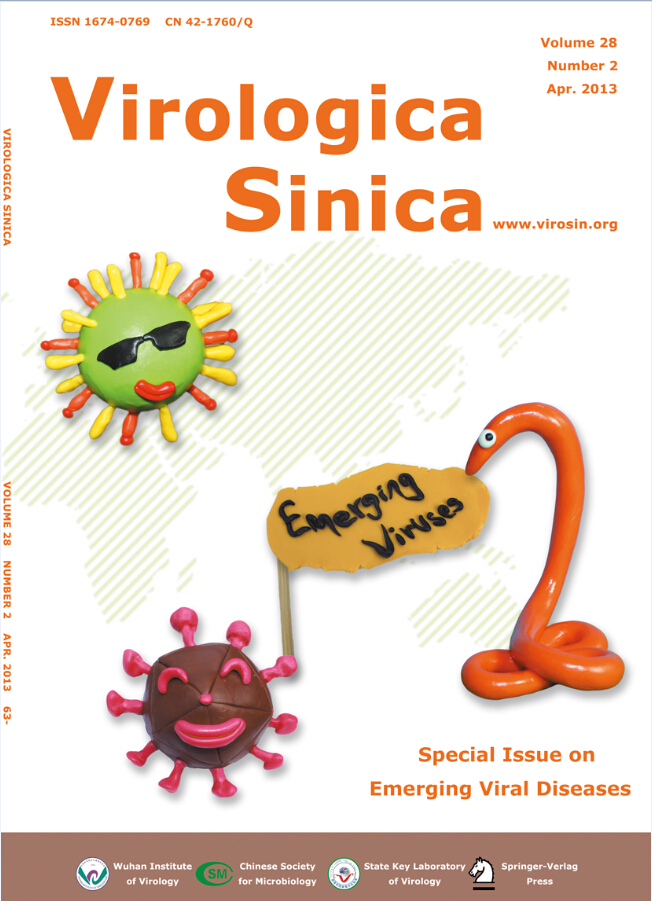 Emerging and re-emerging viruses in the modern world Cartoon images of (re-)emerging viruses - influenza virus (upper left), SARS-CoV (lower Left), and Ebola virus (right). In this special issue we present a collection of updated research reports covering many aspects of emerging viral diseases,including diagnostics, therapeutics development, vaccine strategy, and virus-host interactions. These reports provide a comprehensive summary of our current understanding of these pathogens and how we can combat their spread.

Report of the Fifth Symposium on Emerging Viral Diseases 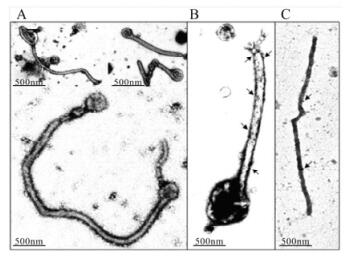 Karen A O Martins, Travis K Warren and Sina Bavari. Characterization of a Putative Filovirus Vaccine: Virus-Like Particles[J]. Virologica Sinica, 2013, 28(2): 65-70. doi: 10.1007/s12250-013-3306-9.
Filoviruses are hemorrhagic fever viruses endemic to parts of Africa and the Philippines. Infection carries with it a mortality rate of up to 90% and currently there are no effective vaccines or therapeutics available to combat infection. However, the filovirus virus-like particles (VLP), which are currently under development, have been shown to be a promising vaccine candidate. They provide protection from infection in the mouse, guinea pig, and nonhuman primate models of infection, eliciting high anti-glycoprotein antibody titers and T cell responses to viral proteins. In this review, we will highlight the development of the filovirus VLP and describe the current understanding of VLP immunogenicity and correlates of protection.

Zhongyu Zhu, Ponraj Prabakaran, Weizao Chen, Christopher C. Broder, Rui Gong and Dimiter S. Dimitrov. Human Monoclonal Antibodies as Candidate Therapeutics Against Emerging Viruses and HIV-1[J]. Virologica Sinica, 2013, 28(2): 71-80. doi: 10.1007/s12250-013-3313-x.
More than 40 monoclonal antibodies (mAbs) have been approved for a number of disease indications with only one of these (Synagis)-for a viral disease, and not for therapy but for prevention. However, in the last decade novel potent mAbs have been discovered and characterized with potential as therapeutics against viruses of major importance for public health and biosecurity including Hendra virus (HeV), Nipah virus (NiV), severe acute respiratory syndrome coronavirus (SARS-CoV), Ebola virus (EBOV), West Nile virus (WNV), influenza virus (IFV) and human immunodeficiency virus type 1 (HIV-1). Here, we review such mAbs with an emphasis on antibodies of human origin, and highlight recent results as well as technologies and mechanisms related to their potential as therapeutics.
Research Article 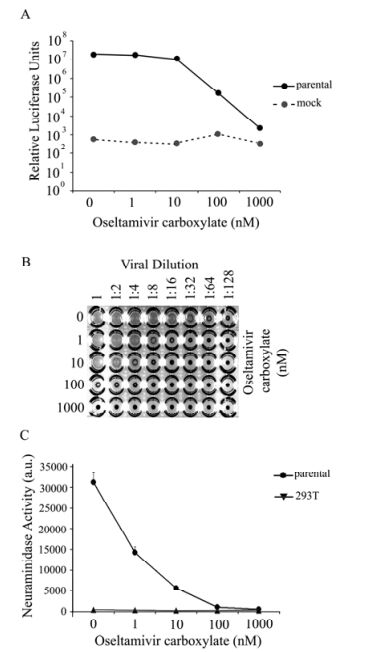 Jennifer Tisoncik-Go, Katie S Cordero and Lijun Rong. Analysis of Oseltamivir Resistance Substitutions in Influenza Virus Glycoprotein Neuraminidase using a Lentivirus-Based Surrogate Assay System[J]. Virologica Sinica, 2013, 28(2): 81-91. doi: 10.1007/s12250-013-3307-8.
Influenza A virus poses a great threat to global health, and oseltamivir (trade marked as Tamiflu), which targets influenza surface glycoprotein neuraminidase (NA), is used clinically as a major anti-influenza treatment. However, certain substitutions in NA can render an influenza virus resistant to this drug. In this study, using a lentiviral pseudotyping system, which alleviates the safety concerns of studying highly pathogenic influenza viruses such as avian influenza H5N1, that utilizes influenza surface glycoproteins (hemagglutinin or HA, and NA) and an HIV-core combined with a luciferase reporter gene as a surrogate assay, we first assessed the functionality of NA by measuring pseudovirion release in the absence or presence of oseltamivir. We demonstrated that oseltamivir displays a dose-dependent inhibition on NA activity. In contrast, a mutant NA (H274Y) is more resistant to oseltamivir treatment. In addition, the effects of several previously reported substitution NA mutants were examined as well. Our results demonstrate that this lentivirus-based pseudotyping system provides a quick, safe, and effective way to assess resistance to neuraminidase inhibitors. And we believe that as new mutations appear in influenza isolates, their impact on the effectiveness of current and future anti-NA can be quickly and reliably evaluated by this assay. 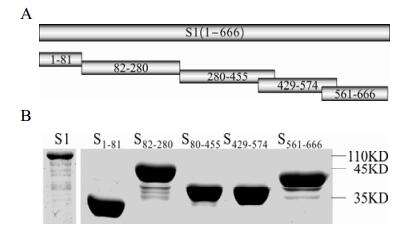 Peng Zhou, Zhenggang Han, Lin-Fa Wang and Zhengli Shi. Identification of Immunogenic Determinants of the Spike Protein of SARS-like Coronavirus[J]. Virologica Sinica, 2013, 28(2): 92-96. doi: 10.1007/s12250-013-3292-y.
Bat SARS-like coronavirus (SL-CoV) has a genome organization almost identical to that of SARS-CoV, but the N-terminus of the Spike (S) proteins, which interacts with host receptor and is a major target of neutralizing antibodies against CoVs, of the two viruses has only 63-64% sequence identity. Although there have been reports studying the overall immunogenicity of SSL, knowledge on the precise location of immunodominant determinants for SSL is still lacking. In this study, using a series of truncated expressed SSL fragments and SSL specific mouse sera, we identified two immunogenic determinants for SSL. Importantly, one of the two regions seems to be located in a region not shared by known immunogenic determinants of the SSARS. This finding will be of potential use in future monitoring of SL-CoV infection in bats and spillover animals and in development of more effective vaccine to cover broad protection against this new group of coronaviruses.

Identification and Typing of Respiratory Adenoviruses in Guangzhou, Southern China Using a Rapid and Simple Method

Guiyuan Han, Hongling Niu, Suhui Zhao, Bing Zhu, Changbing Wang, Yungang Liu, Mingjie Zhang, Shu Yang, Feitong Liu, Chengsong Wan and Qiwei Zhang. Identification and Typing of Respiratory Adenoviruses in Guangzhou, Southern China Using a Rapid and Simple Method[J]. Virologica Sinica, 2013, 28(2): 103-108. doi: 10.1007/s12250-013-3308-7.
Human adenoviruses (HAdVs), especially HAdV-B3, -E4 and -B7, are associated with Acute Respiratory Disease in Chinese children, and occasionally in adults. In order to establish and document the profiles of the respiratory adenovirus pathogen among children in Guangzhou, Southern China, a rapid, simple and practical method for identification and typing of respiratory adenoviruses was developed and evaluated. One pair of universal PCR primers was designed according to the conserved region of the hexon gene, which can detect not only HAdV-B3, -E4 and -B7, but also HAdV-B14, -F40 and -F41, with a specific 300bp PCR product. Three pairs of type-specific PCR primers were also designed according to the hypervariable regions of the hexon gene to type HAdV-B3, -E4 and -B7 by three independent PCR reactions, making it easy to optimize the PCR conditions. By using this method, one hundred throat swab specimens collected during Oct 2010 to Dec 2011 and suspected of being positive for adenoviral infection were identified and typed for adenoviruses. Of these samples, fifty-five were adenovirus-positive. The most common HAdV type was HAdV-B3, identified in 92.7% of samples, which is not only consistent with the data reported in 2004-2006, but also consistent with the recent report in Hangzhou, eastern China, indicating that HAdV-B3 has been circulating in Guangzhou, and maybe in eastern China, for many years. The method for the respiratory adenovirus identification and typing we developed is rapid, simple and practical, which has a potential in the real-time surveillance of circulating adenovirus strains and also to provide etiological evidence for the adenovirus-relative disease control and prevention in China. 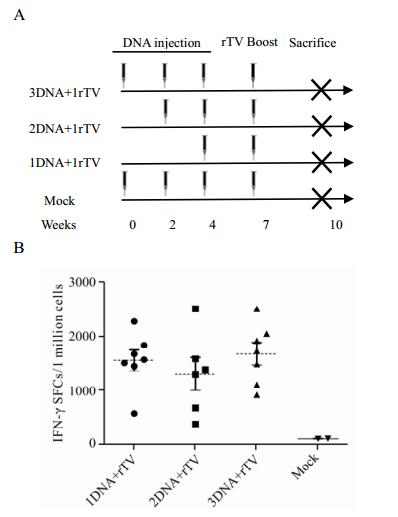 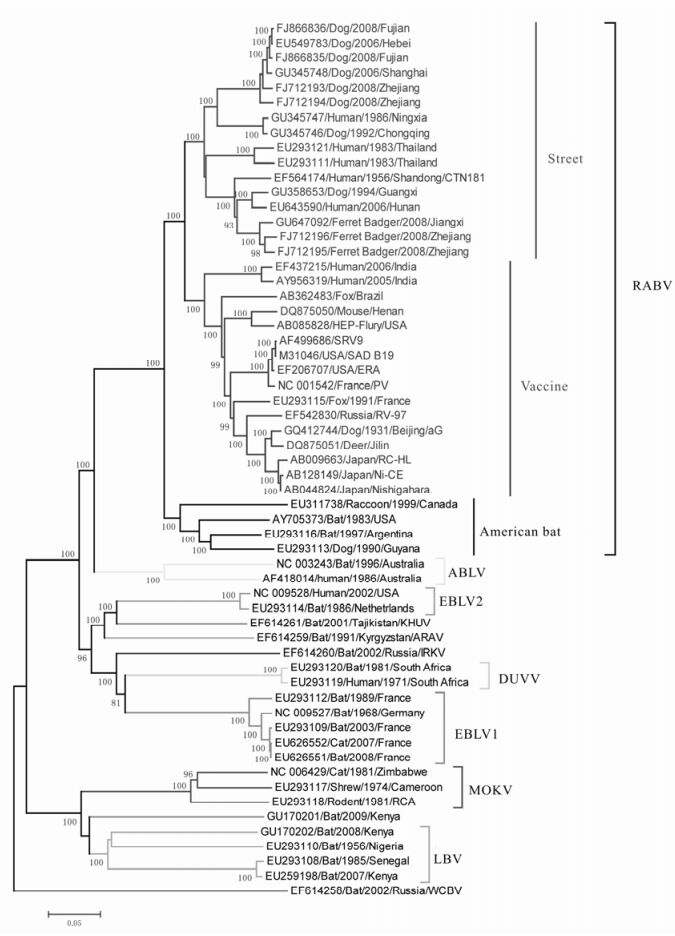 Xiaoyan Tao, Na Han, Zhenyang Guo, Qing Tang, Simon Rayner and Guodong Liang. Molecular Characterization of China Human Rabies Vaccine Strains[J]. Virologica Sinica, 2013, 28(2): 116-123. doi: 10.1007/s12250-013-3314-9.
To understand the molecular characteristics of China human rabies vaccine strains, we report the full-length genome of the aG strain and present a comprehensive analysis of this strain and almost all available lyssavirus genomes (58 strains) from GenBank (as of Jan 6, 2011). It is generally considered that the G protein plays a predominant role in determining the pathogenicity of the virus, to this end we predicted the tertiary structure of the G protein of aG strain, CTN181 strain and wild type strain HN10 based on the crystal structure of Vesicular stomatitis virus (VSV) G. The predicted RABV G structure has a similar topology to VSV G and the ectodomain can be divided into 4 distinct domains DI-DIV. By mapping the characterized mutations to this structure between China vaccine strains and their close street strains, we speculate that the G303(P-H) mutations of CTN181 and HN10 causing DⅡ 3D change may be associated with the attenuated virulence in both strains. Specifically, the two signature mutations (G165P and G231P) in the aG strain are withinβsheets, suggesting that both sites are of structural importance.