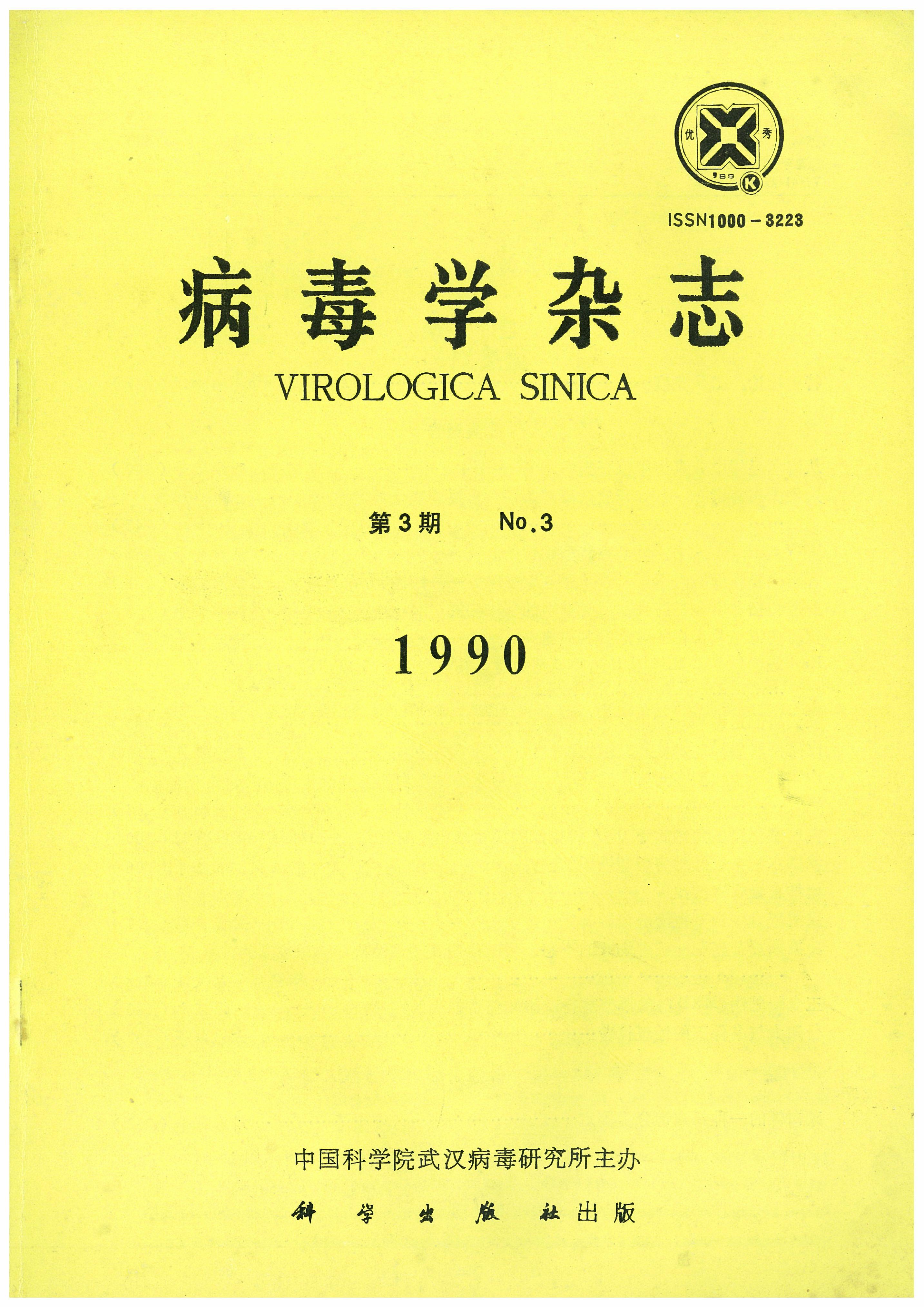 Abstract [PDF 135 KB] [Cited by]
An outbreak of hepatitis A with uncooked Arca subcrenata Lischke has been reported in shanghai in early 1988. Five specimens were collected from the sea at Qidong County Jiangsu Province vhere Produce Arca subcrenata Lischke. Specimens were made of suspension of 40% with the gill and system enteron, then treated by trichloromethane. HAY was isolated with FRHK4 cell cultrues by 21 days and passed continually two generation. All specimens are positive for HAY by IF, ELISA, HAV-cDNA dot hybridization test and ...

Investigation on Anti-idiotypes Directed against Anti-HBs in HBV Infection

Abstract [PDF 172 KB] [Cited by]
Anti-idiotypes directed against anti-HBs in the supernatant were detected by enzyme-linked immunosorbent assay (ELISA) after precipitation of immune complexes from sera with polyethylene glycol 6000(PEG). 115 patients with HBV infection were observed. IgM and IgG anti-(anti-HBs) activities existed in acute hepatitis, CAH and CPH. The positive rate of anti(anti-HBs) in the first week after onset was the highest in acute hepatitis(60.%). After one month Later it fell markedly Therefore detecting anti(anti-HBs...

Morphology, Distribution and Its Signification of Intrahepatic HBV DNA in Liver Disease: A Study by in Situ Hydridization

Abstract [PDF 201 KB] [Cited by]
A biotin-labeled DNA probe specific for hepatitis B virus(HBV)nucleotide sequences was hybridized in situ to liver tissue of 129 cases with liver disease. It was found that HBVDNA was predominantely visualized in cytoplasm of hepatocytes in three ways,cytoplasmic compact pattern,discrete pattern abd inclusion pattern. Its distribution in parenchyma within the section of specimens may be defined as lobular, focal and spotty. The detection of intrahepatic HBVDNA depanded on two factors at least in present stu...

Morphology, Distribution and Its Signification of Intrahepatic HBV DNA in Liver Disease: A Study by in Situ Hydridization

Abstract [PDF 208 KB] [Cited by]
A biotin-labeled DNA probe specific for hepatitis B virus(HBV)nucleotide sequences was hybridized in situ to liver tissue of 129 cases with liver disease. It was found that HBVDNA was predominantely visualized in cytoplasm of hepatocytes in three ways,cytoplasmic compact pattern,discrete pattern abd inclusion pattern. Its distribution in parenchyma within the section of specimens may be defined as lobular, focal and spotty. The detection of intrahepatic HBVDNA depanded on two factors at least in present stu...

Abstract [PDF 143 KB] [Cited by]
SDS-PAGE and immunoblotting test of Hantavirus (HTV)R84-1 strain purified by differential centrifugation were carried out. Two structure proteins of HTV-R841 strain with MW 67k and 43k were identified respectively. It was identified by McAb analysis test that the 67k polypeptide is a viral envelope protein and the 43k polypeptide was uncertain. By western blot, antibodies to the 67k and 43k protein antigens were found in sera from patients with Apodemus type HFRS and the 67k protein antibody were in the pat...

The Establishment of Persistent Infection of Herpes Simplex Virus in Raji Cell and the Effects of TNF, IFNs and Antiserum to It

Abstract [PDF 184 KB] [Cited by]
Persistent infection of herpes simplex virus(HSV) had been maintained in human B lymphoblastoid(Raji) cells for 150 days. The whole course of the persistent infection can be divided into two phases: acute(within 30 days p. i.) and persistent stable(30 days later p.i.). In the acute phase,the virus in the supernatent reached 10~(6?2)TCID_(50)/ml, HSV antigen positive cells(HSV Ag~+ cell) detected by immunofluorescence reached 21% and the percentage of dead cells reached 42%. In the stable phase, the virus an...

The Adaptation of Rabies Virus, Strains in Vero Cell

Abstract [PDF 146 KB] [Cited by]
Rabies is one of the serious infective diseases in China. More than 5 million people per year are wounded by animals. The yield of hamster kidney rabies vaccine produced in China every year is not enough to meet the practical need. So we attempt to develop a Veto cell rabies vaccine with microcarrier system for large scale production. In this paper, the aG virus strain, a Chinese rabies fixed virus used for preparing primary hamster kidney cell vaccine in China since 1980, was adapted in Vero cell. 2 adap...

Abstract [PDF 71 KB] [Cited by]
APAAP bridge-linked enzyme labelling method was established for detection of HIV antibody. Compared with immunofluorescence test (IF), these two methods had the same specificity and reproducibility, but APAAP is more sensitive for detection of HIV antibody than IF test. The technique is simple and convenient, and only requires the ordinary microscope, so it can be applied in HIV screening laboratories and clinic.

Abstract [PDF 177 KB] [Cited by]
Polyhedra were extracted from the cadavers of Heliothis armigera infected with VHA-273 strain of Heliothis armigera nuclear polyhedrosis virus. Observation under electron microscope showed that the polyhedra consisted of mNPV (90%) and sNPV(10%). The purity of polyhedrin purified by serial procedures was confirmed by immunological and electrophoresis methods. When the isoelectric point of the polyhedrin was determined by isoelectric focusing electrophoresis, 7bands appeared, with a major band at p15.78±0.02...

Studies on the Virus of Rice Stripe Disease in China

Abstract [PDF 172 KB] [Cited by]
Rice stripe disease caused severe damage in China. In the past studies, the emphases were limited in the biological identification, epidemics and control methods, so it is still argued whether the disease iscauaed by RSV or even by a virus. In the present study, a virus with filamentous (3nm wide) or branched filamentous (8nm wide )particles were observed in purified preparations and three sedimentation components were founded with Isco fraetionor after 10—40% sucrose density gradient centrifugation. There ...

The Purification of Citrus Tristeza Virus

Abstract [PDF 128 KB] [Cited by]
This paper deals with the Purification method of citrus tristeza virus (CTV) from infected sweet orange(Citrus sinensis[L]. Osbeck). The frozen and infected tissues were homogenized with 0.1mol/L Tris-buffer pH8.4 which contains 0.15% TritonX-100. After several differential centrifugations including two times of precipitation with PEG (MW 6,000), the supernatant was centrifuged by incontinuous sucrose density gradient of 200—400mg/ml and 600 mg/ml at 30,000 r/m (Hitachi, RPT 40 rot) for 3 hours. Then the ba...

Abstract [PDF 127 KB] [Cited by]
TuMV, SMV, and CMV were detected by dot-immunobinding assay (DIA) at dilutions of 1:5120, 1:2560 and 1:1280, respectively. DIA successfully detected 1.7ng of purified SMV and 1.2ng of purified CMV. DIA was used with horseradish peroxidase-linked goat anti-rabbit IgG and nitrocellulose membrane was used as the solid phase. 3, 3-Diamino-benzidine was used as the suhstrate and got good results. Absorption of the first antibody with healthy plant sap was necessary to eliminate background color. This assay is si...

The Relationship between the Virus Concentration and the Plant Shape, Physiological Metabolism and the Character of Yield of Plants Infected by Bean Common Mosaic Virus (V-5)

Abstract [PDF 183 KB] [Cited by]
Inoculating the Bean common mosie virus (V-5) on four bean cultivars—"Shakesha" "Jiaqiaodan" "Zilaiyou" and "Baidajia", then investigating the plants 15 days later, concentration of virus in bean plants reached top level. Meanwhile, the hight of plant, leaf size, the whole mount of chlorophyll and the photosynthetic rate decrease obviously,on the contrary, respiration and free amino acid increase as compared with the healthy plants.From thirty to thirtyfiev days after inoculating, the amount of virus in pla...

Abstract [PDF 179 KB] [Cited by]
In this work, the dynamics of maize rough-dwarf virus(MRDV)epidemics and the economic loss due to the disease were studied using data recorded from naturally infected field maize crops. MRDV epidemics were found to develop during the growing season following the logarithmic parabola(LP), thus models for their progressing on Zhongdan 2 and Danyu 13 maize crops were established by fitting observed data to the LP function y=a?exp(b?x+c?x~2), The LP function is considered general for modelling progress curves o...

A Plaque Assay under Normal Atmosphere

Abstract [PDF 118 KB] [Cited by]
A method for plaquing Grass Carp Hemorrhage Virus-873 has been studied. We tested inorganic(NaHCO_3) and organic(Tris, HEPES) buffer systems in open dish culture and found the combination of organic buffers with bicarbonate to be very promising for both cell growth and viral replication The CIK cells growed well in three media (MEM-NaHCO_3, MEM-Tris and MEMHEPES)under normal atmosphere or 5% CO_2 presure, but the organic buffer alone provided a little good cell growth respose. Two-phase (gel-liquid)media in...