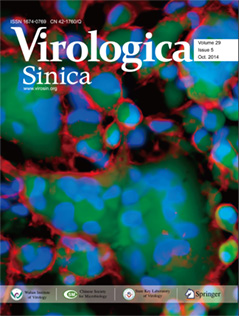 Varicella zoster virus (VZV) causes varicella (chicken pox) and herpes zoster (shingles). The current varicella vaccine (v-Oka) is highly attenuated in the skin, yet retains its neurovirulence and may reactivate and damage sensory neurons. Thus, the neuro-attenuated vaccine is in a great demand. In this issue, Silver and Zhu provide us a comprehensive review on the development of a genetically-defined live-attenuated VZV vaccine which could prevent neuronal and latent infection. The cover image shows the syncytia formation in VZV-infected ARPE-19 cells. Cells were infected with GPF-VZV, stained with WGA-Alexa Fluor 594 probe (red) for cell membrane, and DAPI (blue) for nuclei. (The microscopy image is provided by Dr. Hua Zhu, Rutgers-New Jersey Medical School, USA.) 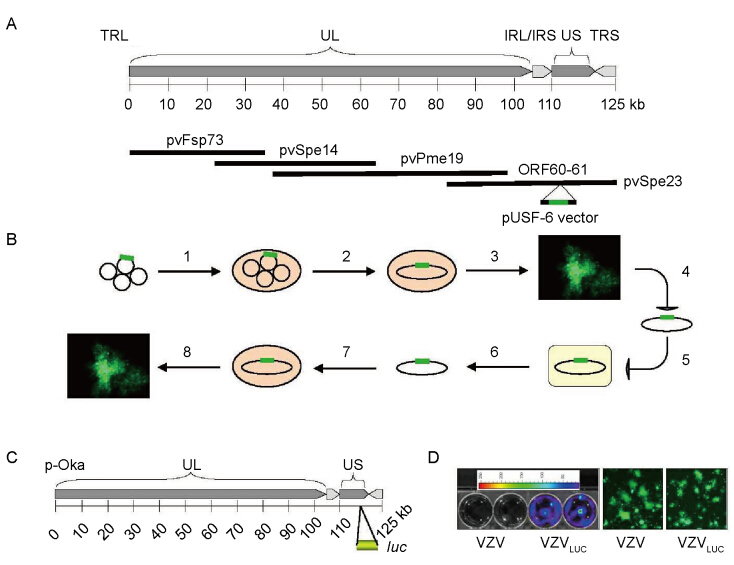 Benjamin Silver and Hua Zhu. Varicella zoster virus vaccines: potential complications and possible improvements[J]. Virologica Sinica, 2014, 29(5): 265-273. doi: 10.1007/s12250-014-3516-9.
Varicella zoster virus (VZV) is the causative agent of varicella (chicken pox) and herpes zoster (shingles). After primary infection, the virus remains latent in sensory ganglia, and reactivates upon weakening of the cellular immune system due to various conditions, erupting from sensory neurons and infecting the corresponding skin tissue. The current varicella vaccine (v-Oka) is highly attenuated in the skin, yet retains its neurovirulence and may reactivate and damage sensory neurons. The reactivation is sometimes associated with postherpetic neuralgia (PHN), a severe pain along the affected sensory nerves that can linger for years, even after the herpetic rash resolves. In addition to the older population that develops a secondary infection resulting in herpes zoster, childhood breakthrough herpes zoster affects a small population of vaccinated children. There is a great need for a neuro-attenuated vaccine that would prevent not only the varicella manifestation, but, more importantly, any establishment of latency, and therefore herpes zoster. The development of a genetically-defined live-attenuated VZV vaccine that prevents neuronal and latent infection, in addition to primary varicella, is imperative for eventual eradication of VZV, and, if fully understood, has vast implications for many related herpesviruses and other viruses with similar pathogenic mechanisms.
Research Article 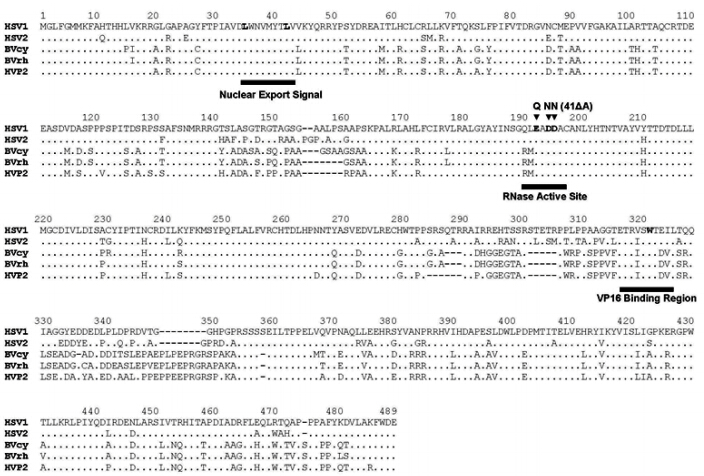 Darla Black, Jerry Ritchey, Mark Payton and Richard Eberle. Role of the virion host shutoff protein in neurovirulence of monkey B virus (Macacine herpesvirus 1)[J]. Virologica Sinica, 2014, 29(5): 274-283. doi: 10.1007/s12250-014-3495-x.
Monkey B virus (Macacine herpesvirus 1; BV) is noted for its extreme neurovirulence in humans. Since the vhs protein encoded by the UL41 gene has been shown to be a neurovirulence factor in the related human herpes simplex viruses, the role of the UL41 gene in BV neurovirulence was investigated. BV mutants were constructed that lacked the entire UL41 ORF (Δ41) or had the RNase active site mutated (Δ41A). Neither mutant shut off host protein synthesis, degraded β-actin mRNA, or prevented an IFN-β response, indicating that the vhs protein and its RNase activity are both necessary for these activities. Replication of both mutants in primary mouse cells was impaired and they exhibited a prolonged disease course in mice. Whereas Δ41 infected mice were euthanized for symptoms related to central nervous system (CNS) infection, Δ41A infected mice were euthanized primarily for symptoms of autonomic nervous system dysfunction. While neuroinvasiveness was not affected, lesions in the CNS were more limited in size, anatomical distribution, and severity than for wild-type virus. These results indicate that the vhs protein affects the general replicative efficiency of BV in vivo rather than being a specific neurovirulence factor critical for invasion of or preferential replication in the CNS.

Tetiana Krupodorova, Svetlana Rybalko and Victor Barshteyn. Antiviral activity of Basidiomycete mycelia against influenza type A (serotype H1N1) and herpes simplex virus type 2 in cell culture[J]. Virologica Sinica, 2014, 29(5): 284-290. doi: 10.1007/s12250-014-3486-y.
In this study, we investigated the in vitro antiviral activity of the mycelia of higher mushrooms against influenza virus type A (serotype H1N1) and herpes simplex virus type 2 (HSV-2), strain BH. All 10 investigated mushroom species inhibited the reproduction of influenza virus strain A/FM/1/47 (H1N1) in MDCK cells reducing the infectious titer by 2.0-6.0 lg ID50. Four species, Pleurotus ostreatus, Fomes fomentarius, Auriporia aurea, and Trametes versicolor, were also determined to be effective against HSV-2 strain BH in RK-13 cells, with similar levels of inhibition as for influenza. For some of the investigated mushroom species—Pleurotus eryngii, Lyophyllum shimeji, and Flammulina velutipes—this is the first report of an anti-influenza effect. This study also reports the first data on the medicinal properties of A. aurea, including anti-influenza and antiherpetic activities. T. versicolor 353 mycelium was found to have a high therapeutic index (324.67), and may be a promising material for the pharmaceutical industry as an anti-influenza and antiherpetic agent with low toxicity. Mycelia with antiviral activity were obtained in our investigation by bioconversion of agricultural wastes (amaranth flour after CO2 extraction), which would reduce the cost of the final product and solve some ecological problems. 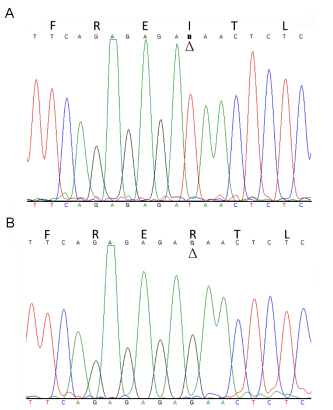 Aiguo Xin, Mingwang Zhu, Qi Hu, Haisheng Miao, Zhenqi Peng, Yuwen He, Lin Gao and Huachun Li. Effect of amino acid mutation at position 127 in 3A of a rabbit-attenuated foot-and-mouth disease virus serotype Asia1 on viral replication and infection[J]. Virologica Sinica, 2014, 29(5): 291-298. doi: 10.1007/s12250-014-3464-4.
An amino acid mutation (R127→I) in the 3A non-structural protein of an FMDV serotype Asia1 rabbit-attenuated ZB strain was previously found after attenuation of the virus. To explore the effects of this mutation on viral replication and infection, the amino acid residue isoleucine (I) was changed to arginine (R) in the infectious cDNA clone of the rabbit-attenuated ZB strain by site-directed mutagenesis, and the R127-mutated virus was rescued. BHK monolayer cells and suckling mice were inoculated with the R127-mutated virus to test its growth property and pathogenicity, respectively. The effects of the R127 mutation on viral replication and virulence were analyzed. The data showed that there was a slight difference in plaque morphology between the R127-mutated and wild-type viruses. The growth rate of the mutated virus was lower in BHK-21 cells and its virulence in suckling mice was also attenuated. This study indicates that the R127 mutation in 3A may play an important role in FMDV replication in vitro and in pathogenicity in suckling mice. 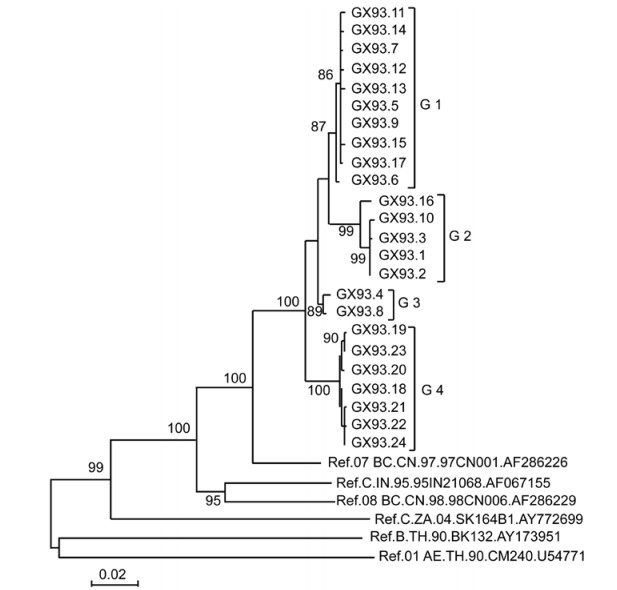 Jianhui Nie, Juan Zhao, Qingqing Chen, Weijin Huang and Youchun Wang. Three amino acid residues in the envelope of human immunodeficiency virus type 1 CRF07_BC regulate viral neutralization susceptibility to the human monoclonal neutralizing antibody IgG1b12[J]. Virologica Sinica, 2014, 29(5): 299-307. doi: 10.1007/s12250-014-3485-z.
The CD4 binding site (CD4bs) of envelope glycoprotein (Env) is an important conserved target for anti-human immunodeficiency virus type 1 (HIV-1) neutralizing antibodies. Neutralizing monoclonal antibodies IgG1 b12 (b12) could recognize conformational epitopes that overlap the CD4bs of Env. Different virus strains, even derived from the same individual, showed distinct neutralization susceptibility to b12. We examined the key amino acid residues affecting b12 neutralization susceptibility using single genome amplification and pseudovirus neutralization assay. Eleven amino acid residues were identified that affect the sensitivity of Env to b12. Through site-directed mutagenesis, an amino acid substitution at position 182 in the V2 region of Env was confirmed to play a key role in regulating the b12 neutralization susceptibility. The introduction of V182L to a resistant strain enhanced its sensitivity to b12 more than twofold. Correspondingly, the introduction of L182V to a sensitive strain reduced its sensitivity to b12 more than tenfold. Amino acid substitution at positions 267 and 346 could both enhance the sensitivity to b12 more than twofold. However, no additive effect was observed when the three site mutageneses were introduced into the same strain, and the sensitivity was equivalent to the single V182L mutation. CRF07_BC is a major circulating recombinant form of HIV-1 prevalent in China. Our data may provide important information for understanding the molecular mechanism regulating the neutralization susceptibility of CRF07_BC viruses to b12 and may be helpful for a vaccine design targeting the CD4bs epitopes
Letter 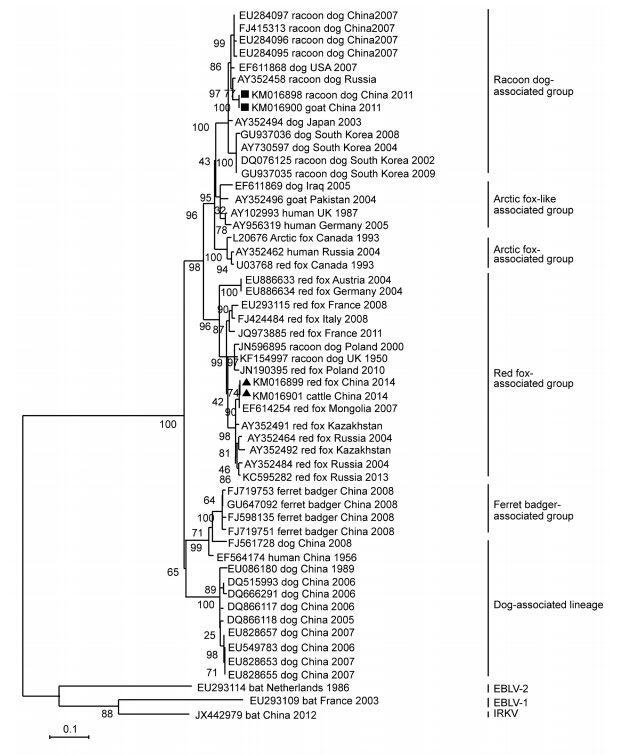 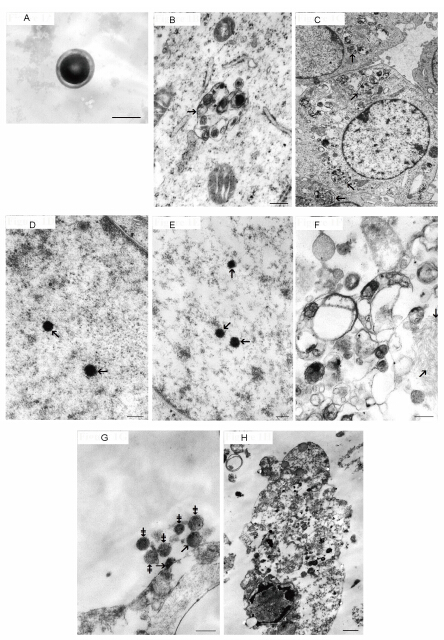 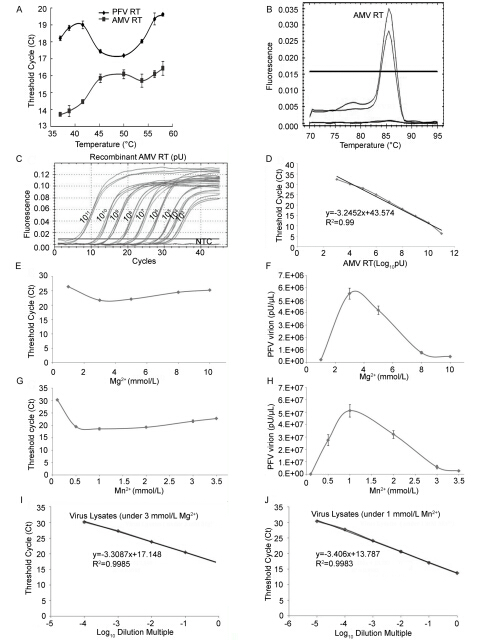 Australian Hajj pilgrims’ knowledge about MERS-CoV and other respiratory infections 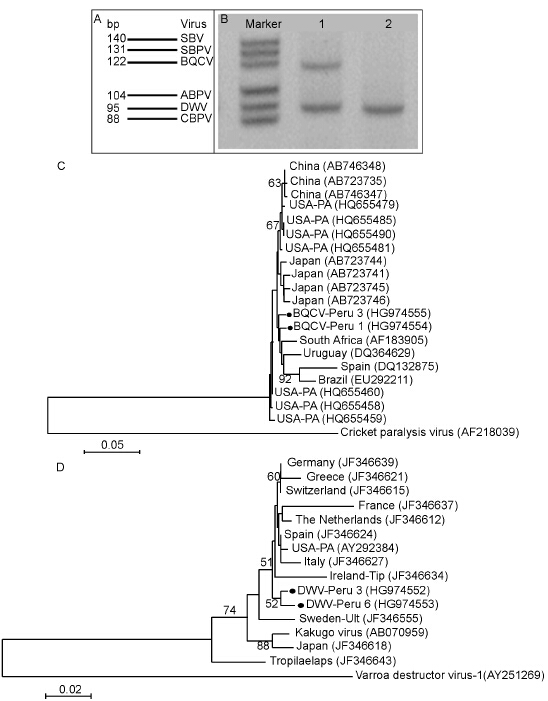 First detection of viruses in Africanized honey bees from Peru 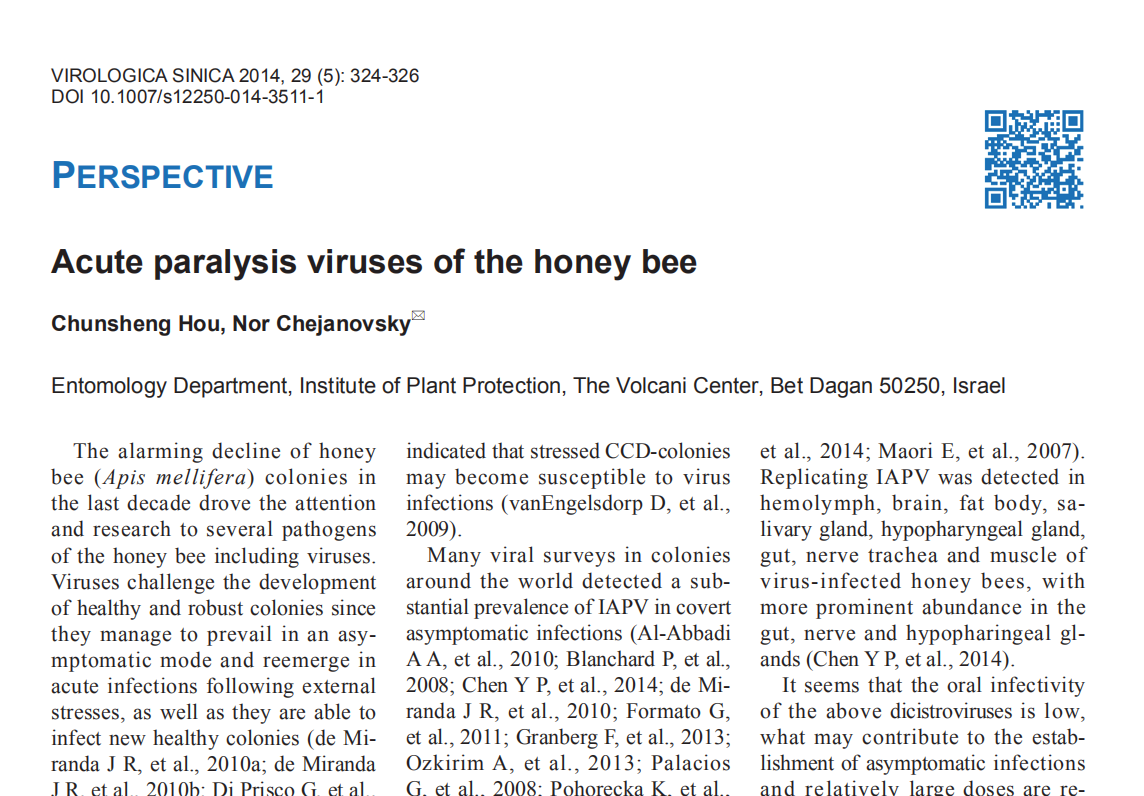