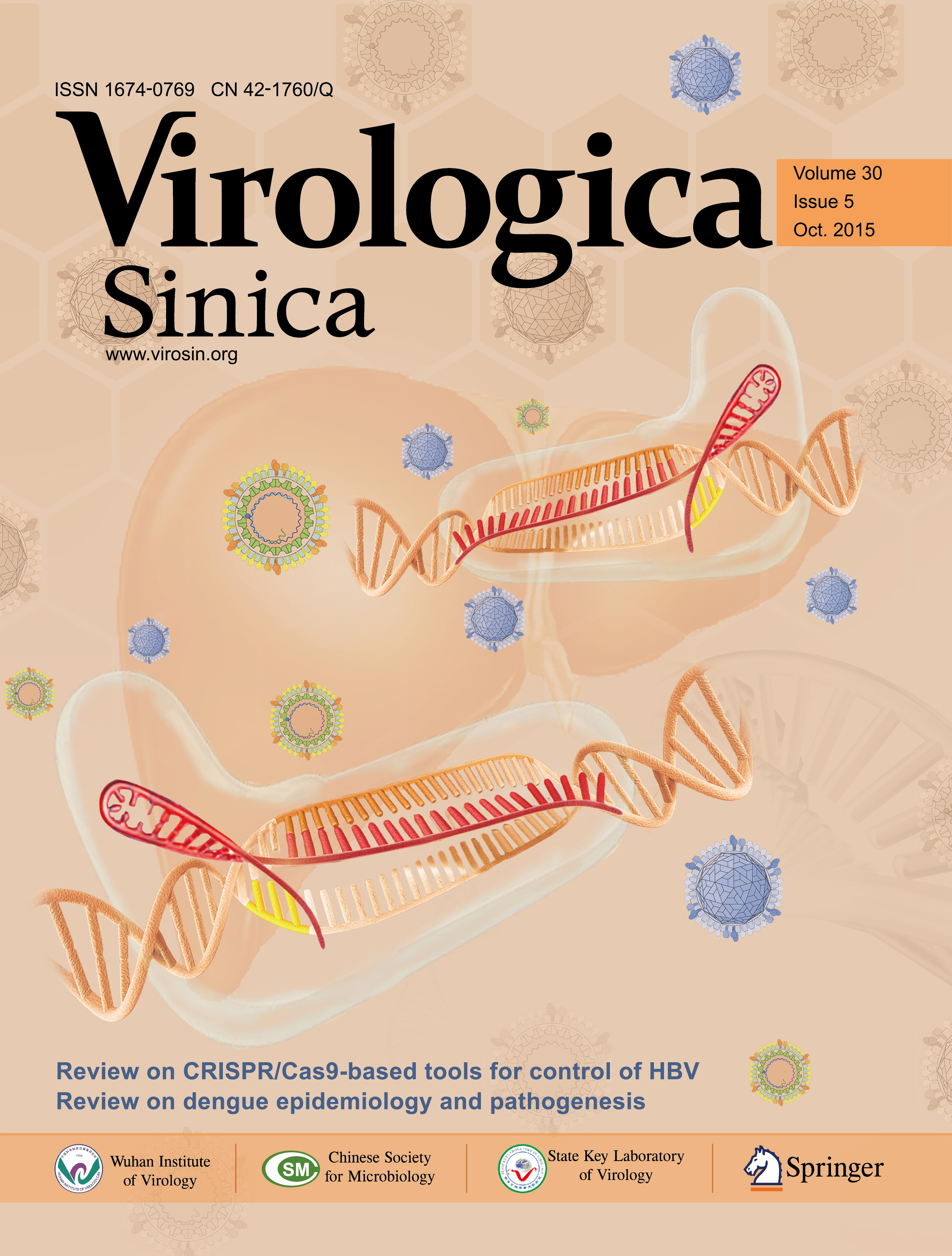 Hepatitis B virus (HBV) infection remains a major global health problem because current therapies rarely eliminate the replicative template of HBV, which is the covalently closed circular DNA (cccDNA). As an accurate and efficient genome editing tool, clustered regularly interspaced palindromic repeat (CRISPR)-associated (Cas) 9 system represents a very promising potential therapeutic tool for eradication of HBV, including cccDNA. In this issue, Cheng Peng et al. reviewed recent advances in the application of CRISPR/Cas9 as an inhibitor of HBV, and discussed the obstacles and possibilities of the CRISPR/Cas9 system as a curative therapy for chronic hepatitis B infection. The cover image shows CRISPR/Cas9 based gene editing in the background of HBV liver infection. See page 317–325 for details. 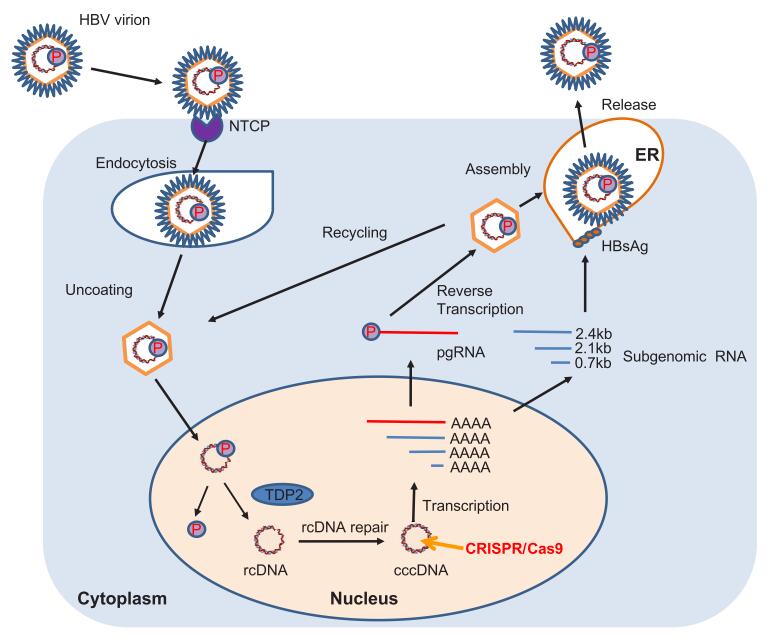 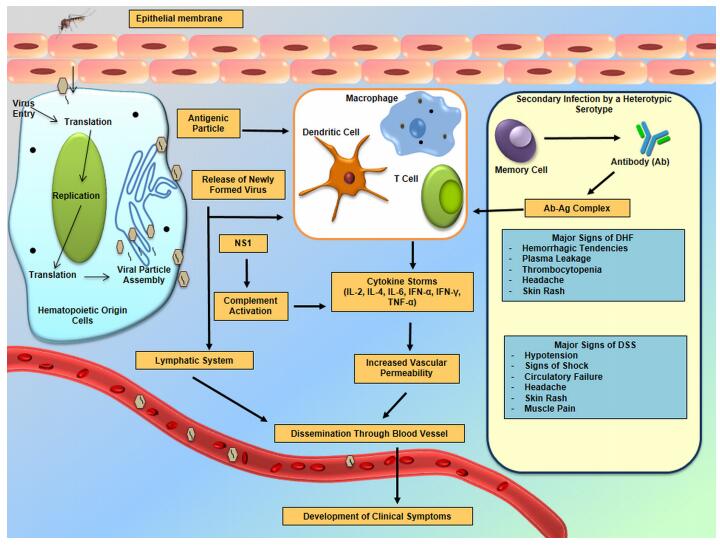 Dengue epidemiology and pathogenesis: images of the future viewed through a mirror of the past

Rashedul Islam, Mohammed Salahuddin, Md. Salahuddin Ayubi, Tahmina Hossain, Apurba Majumder, Andrew W. Taylor-Robinson and Abdullah Mahmud-Al-Rafat. Dengue epidemiology and pathogenesis: images of the future viewed through a mirror of the past[J]. Virologica Sinica, 2015, 30(5): 326-343. doi: 10.1007/s12250-015-3624-1.
Every year, millions of individuals throughout the world are seriously affected by dengue virus. The unavailability of a vaccine and of anti-viral drugs has made this mosquito-borne disease a serious health concern. Not only does dengue cause fatalities but it also has a profoundly negative economic impact. In recent decades, extensive research has been performed on epidemiology, vector biology, life cycle, pathogenesis, vaccine development and prevention. Although dengue research is still not at a stage to suggest definite hopes of a cure, encouraging significant advances have provided remarkable progress in the fight against infection. Recent developments indicate that both anti-viral drug and vaccine research should be pursued, in parallel with vector control programs.
Research Article 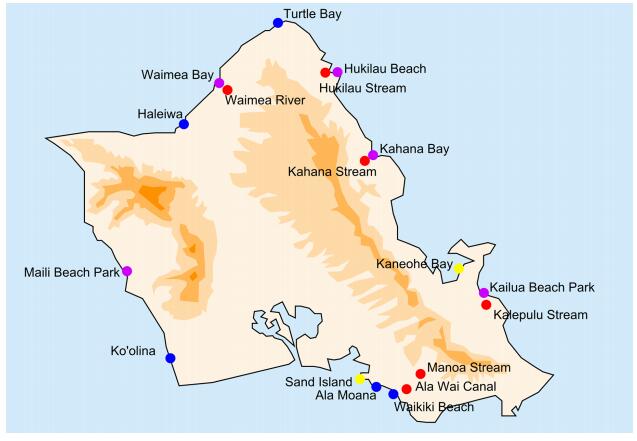 Erin Allmann Updyke, Zi Wang, Si Sun, Christina Connell, Marek Kirs, Mayee Wong and Yuanan Lu. Human enteric viruses – potential indicators for enhanced monitoring of recreational water quality[J]. Virologica Sinica, 2015, 30(5): 344-353. doi: 10.1007/s12250-015-3644-x.
Recreational waters contaminated with human fecal pollution are a public health concern, and ensuring the safety of recreational waters for public use is a priority of both the Environmental Protection Agency (EPA) and the Centers for Disease Control and Prevention (CDC). Current recreational water standards rely on fecal indicator bacteria (FIB) levels as indicators of human disease risk. However present evidence indicates that levels of FIB do not always correspond to the presence of other potentially harmful organisms, such as viruses. Thus, enteric viruses are currently tested as water quality indicators, but have yet to be successfully implemented in routine monitoring of water quality. This study utilized enteric viruses as possible alternative indicators of water quality to examine 18 different fresh and offshore recreational waters on O‘ahu, Hawai‘i, by using newly established laboratory techniques including highly optimized PCR, real time PCR, and viral infectivity assays. All sample sites were detected positive for human enteric viruses by PCR including enterovirus, norovirus genogroups I and II, and male specific FRNA coliphage. A six time-point seasonal study of enteric virus presence indicated significant variation in virus detection between the rainy and dry seasons. Quantitative PCR detected the presence of norovirus genogroup II at levels at which disease risk may occur, and there was no correlation found between enteric virus presence and FIB counts. Under the present laboratory conditions, no infectious viruses were detected from the samples PCR-positive for enteric viruses. These data emphasize both the need for additional indicators for improved monitoring of water quality, and the feasibility of using enteric viruses as these indicators. 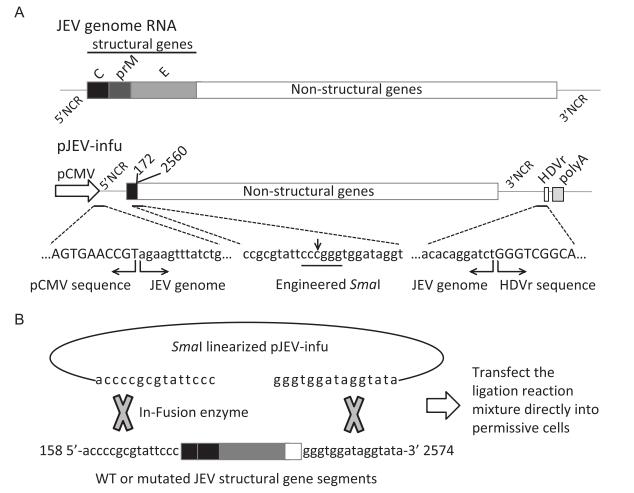 Ruikun Du, Manli Wang, Zhihong Hu, Hualin Wang and Fei Deng. An in vitro recombination-based reverse genetic system for rapid mutagenesis of structural genes of the Japanese encephalitis virus[J]. Virologica Sinica, 2015, 30(5): 354-362. doi: 10.1007/s12250-015-3623-2.
Japanese encephalitis virus (JEV) is one of the most common pathogens of severe viral encephalitis, which is a severe threat to human health. Despite instability of the JEV genome in bacteria, many strategies have been developed to establish molecular clone systems of JEV, providing convenient tools for studying the virus life cycle and virus–host interactions. In this study, we adapted an In-Fusion enzyme-based in vitro recombination method to construct a reverse genetic system of JEV, thereby providing a rapid approach to introduce mutations into the structural genes. A truncated genome without the structural genes was constructed as the backbone, and the complementary segment containing the structural genes was recombined in vitro, which was then transfected directly into virus-permissive cells. The progeny of the infectious virus was successfully detected in the supernatant of the transfected cells, and showed an identical phenotype to its parental virus. To provide a proof-of-principle, the 12 conserved cysteine residues in the envelope (E) protein of JEV were respectively mutated using this approach, and all mutations resulted in a complete failure to generate infectious virus. However, a leucine-tophenylanine mutation at amino acid 107 of the E protein did not interfere with the production of the infectious virus. These results suggested that all 12 cysteines in the E protein are essential for the JEV life cycle. In summary, a novel reverse genetic system of JEV was established for rapidly introducing mutations into structural genes, which will serve as a useful tool for functional studies. 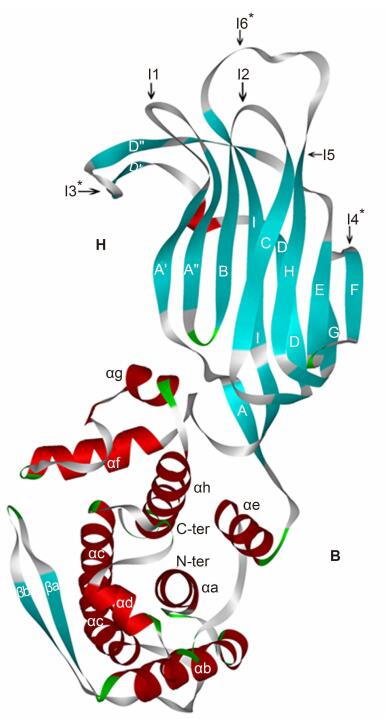 Bingxin Zhao, Xiaoxia Pan, Yumei Teng, Wenyue Xia, Jing Wang, Yuling Wen and Yuanding Chen. Rotavirus VP7 epitope chimeric proteins elicit cross-immunoreactivity in guinea pigs[J]. Virologica Sinica, 2015, 30(5): 363-370. doi: 10.1007/s12250-015-3620-5.
VP7 of group A rotavirus (RVA) contains major neutralizing epitopes. Using the antigenic protein VP6 as the vector, chimeric proteins carrying foreign epitopes have been shown to possess good immunoreactivity and immunogenicity. In the present study, using modified VP6 as the vector, three chimeric proteins carrying epitopes derived from VP7 of RVA were constructed. The results showed that the chimeric proteins reacted with anti-VP6 and with SA11 and Wa virus strains. Antibodies from guinea pigs inoculated with the chimeric proteins recognized VP6 and VP7 of RVA and protected mammalian cells from SA11 and Wa infection in vitro. The neutralizing activities of the antibodies against the chimeric proteins were significantly higher than those against the vector protein VP6F. Thus, development of chimeric vaccines carrying VP7 epitopes using VP6 as a vector could be a promising alternative to enhance immunization against RVAs. 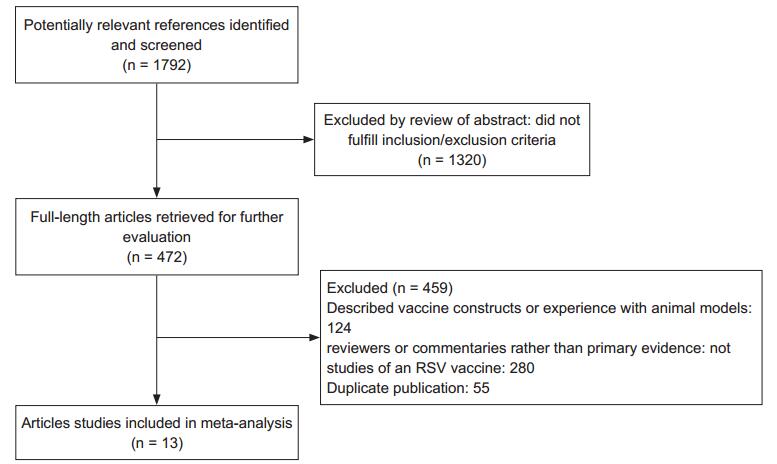 Tongna Zhu, Chuanlong Zhang, Li Yu, Jingxian Chen, Huan Qiu, Weiwei Lyu and Shenghai Huang. The preventive effect of vaccine prophylaxis on severe respiratory syncytial virus infection: A meta-analysis[J]. Virologica Sinica, 2015, 30(5): 371-378. doi: 10.1007/s12250-015-3630-3.
Respiratory syncytial virus (RSV) is the key underlying cause of acute lower respiratory tract infection in infants; however, no licensed vaccine against RSV infection is currently available. This study was undertaken to assess the preventive effect of vaccine on RSV infection. In this meta-analysis, 1,792 published randomized clinical trials of RSV vaccines from Jan 1973 to Sep 2015 were examined. Among thirteen studies that met the inclusion criteria, eleven studies estimated the impact of RSV vaccines and four studies estimated the effect of adjuvants. The odds ratios (ORs) were 0.31 (95% CI, 0.15–0.67) and 0.62 (95% CI, 0.29–1.34), respectively. We found that RSV subunit vaccines can significantly reduce the incidence of RSV infection and that whether vaccination with adjuvant therapy was an effective strategy still remained to be studied. This analysis of the preventive effect of vaccines on RSV infection has direct applications for the prevention of RSV infections. 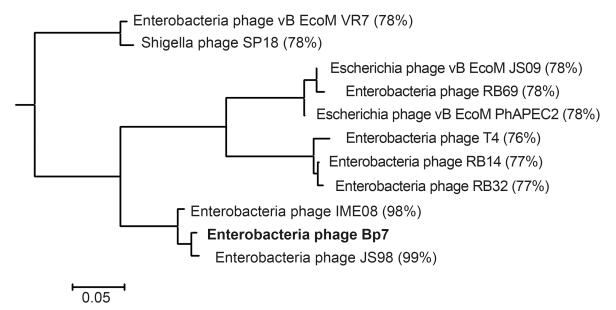 Can Zhang, Yuanchao Wang, Huzhi Sun and Huiying Ren. Multiple-site mutations of phage Bp7 endolysin improves its activities against target bacteria[J]. Virologica Sinica, 2015, 30(5): 386-395. doi: 10.1007/s12250-015-3618-z.
The widespread use of antibiotics has caused serious drug resistance. Bacteria that were once easily treatable are now extremely difficult to treat. Endolysin can be used as an alternative to antibiotics for the treatment of drug-resistant bacteria. To analyze the antibacterial activity of the endolysin of phage Bp7 (Bp7e), a 489-bp DNA fragment of endolysin Bp7e was PCR-amplified from a phage Bp7 genome and cloned, and then a pET28a-Bp7e prokaryotic expression vector was constructed. Two amino acids were mutated (L99A, M102E) to construct pET28a-Bp7Δe, with pET28a-Bp7e as a template. Phylogenetic analysis suggested that BP7e belongs to a T4-like phage endolysin group. Bp7e and its mutant Bp7Δe were expressed in Escherichia coli BL21(DE3) as soluble proteins. They were purified by affinity chromatography, and then their antibacterial activities were analyzed. The results demonstrated that the recombinant proteins Bp7e and Bp7Δe showed obvious antibacterial activity against Micrococcus lysodeikticus but no activity against Staphylococcus aureus. In the presence of malic acid, Bp7e and Bp7Δe exhibited an effect on most E. coli strains which could be lysed by phage Bp7, but no effect on Salmonella paratyphi or Pseudomonas aeruginosa. Moreover, Bp7Δe with double-site mutations showed stronger antibacterial activity and a broader lysis range than Bp7e.
Letter

Fan Yang, Xiaowan Liu, Yuancheng Zhou, Wenting Lyu, Siyao Xu, Zhiwen Xu and Ling Zhu. Histopathology of Porcine kobuvirus in Chinese piglets[J]. Virologica Sinica, 2015, 30(5): 396-399. doi: 10.1007/s12250-015-3608-1.
In this study, our main purpose was to determine whether PKoV causes histopathological lesions after infection of piglets. PCR results confirmed that the piglets were indeed infected by PKoV. Additionally, we chose healthy experimental animals in this study, reared under standard conditions, such as feed and management, therefore, we speculated that pathological changes observed were caused by PKoV. To date, no studies have reported that PKoV causes CPE in cell culture, as seen in this study. We in fact, obtained 2 cell-adapted Kobuvirus strains by plaque purification and electron microscopy, which indicates cell compatibility. This could also be related to environmental factors and viral mutations. In conclusion, we showed that PKoV, as a unique causative agent, produced diarrhea and specific pathological lesions, which may lead to interstitial pneumonia, nephrosis, and gastroenteritis. This study provides an important basis for further research on the pathogenic characteristics of PKoV. Moreover, further studies are required to obtain direct evidence for pathogenesis, transmission, immunology, and epidemiology of PKoV.