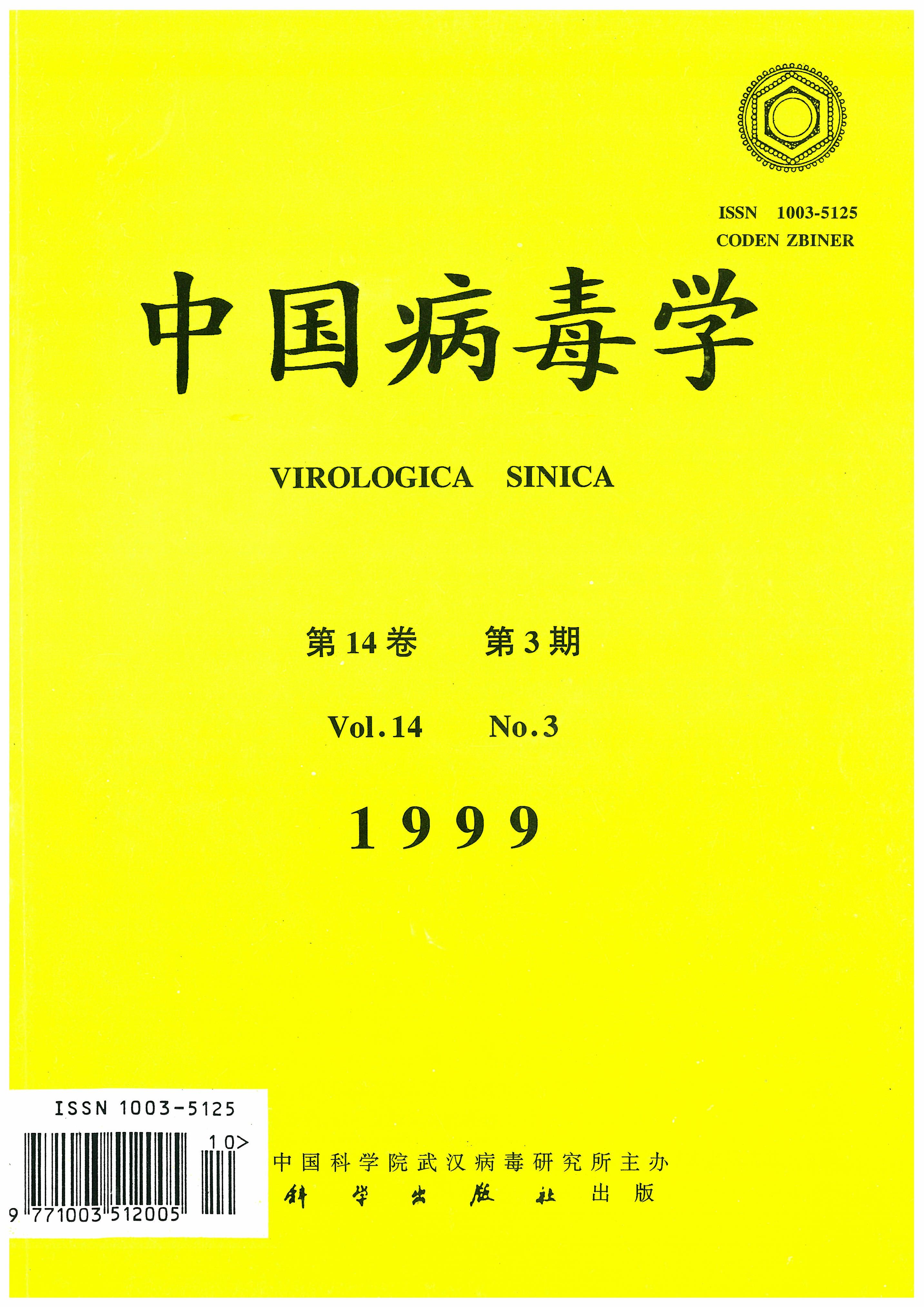 Sequencing of the W hole Gene of Hepatitis B Virus

Separation，Purification and Identification of Structural Proteins of Hepatitis A Virus

Abstract [PDF 204 KB] [Cited by]
A cell line persistently infected by Hepatitis A virus (HAV) was ultilized to produce high yield viral particles of HAV. HAV particles were recovered in a single ultracentrifugation step through discontinuous sucrose/glycerol density gradients. Three kinds of major structural protein of HAV were separated and purified by high performance liquid chormatography. SDS PAGE demonstrated the molecular weight of three structural proteins of HAV being 33, 29 and 27?kD. The special immune reactions were shown in Western blot test, suggesting the proteins with 33, 29 and 27?kD are VP\-1, VP\-2 and VP\-3 of the virus, respectively. The total contents of the proteins, VP\-1, VP\-2 and VP\-3 were respectively 687, 220.8, 68 and 213.6?g from 11?200?cm\+2 cells infected with HAV. The highly purified particles and sturctural proteins of HAV may be used in research for the development of vaccine, clinical diagnosis and pathogenesis of HAV.

Abstract [PDF 149 KB] [Cited by]
With polymerase chain reaction (PCR) a fragment encoding the 28 kDa protein of wheat yellow mosaic virus (WYMV) RNA2 was amplified and constructed into plasmid of pET11a for prokaryotic expression. BL21 (DE3) of \%E.coli\% transformed with the recombinant plasmid of pE2839 was induced to specifically express the 28 kDa protein in high level. The expressed 28 kDa protein was purified from SDS polyacrylamide gels and the antiserum against the protein was raised in rabbit. In Western blotting analysis, the antiserum reacted with the 28?kDa protein.

Abstract [PDF 233 KB] [Cited by]
According to the differential pH precipitation of proteins, two methods were established for purification of disease specific protein (SP) in rice plants infected by rice stripe virus (RSV), a member of \%Tenuivirus.\% The yields obtained by the two methods were 0.8 and 2.0 mg SP per g of infected tissues, respectively. After separation by SDS PAGE, further purified SP was obtained. The Mr of SP is 20.1 kDa. Antisera against the crude and further purified SP were prepared with the titer of 51 200 and 6 400, respectively. The antiserum against the further purified SP was proved to be highly specific, with which the serological relationships between RSV SP and RSV CP, CP and SP of rice grassy stunt virus (RGSV), another member of \%Tenuivirus\% were studied. Using PAS ELISA, it was found that RSV SP antiserum did not react with RSV CP and RGSV CP, but weakly reacted with RGSV SP. No serological relationship existed between RSV SP and the antisera raised against RSV CP, RGSV SP and RGSV CP, respecti

Abstract [PDF 234 KB] [Cited by]
The j5R open reading frame (ORF) of African swine fever virus was predicted by computing to encode a 12.9 kDa protein with two successive N terminal transmembrane domains and one C terminal antigenic epitope. Antibodies raised against a synthetic peptide derived from the C terminal epitope detected a specific protein of 23 or 25 kDa (depending on different isolates) in ASFV infected cells or purified extracellular ASFV virions. Immunofluorescence showed that the j5R protein was mainly located in the virus assembly sites within ASFV infected cells. Phase separation of purified extracellular ASFV virions and fractionation of ASFV infected cells demonstrated that the j5R protein was in the detergent phase and membrane fraction, confirming that the j5R protein was membrane associated.

Abstract [PDF 146 KB] [Cited by]
The primers for RT PCR were designed on the basis of M and N gene sequence of PRRSV. A gene fragment about 900 bp, which has digestion sites of EcoRI and BamHI, was amplified by RT PCR. The M and N gene were cloned into expression vector pBV220 and one recombinant PBVMN was constructed which highly expressed a 34 kD protein in \%E. coli\% DH 5 . The expressed product was identified by SDS PAGE and Western blotting, which occupies 12% of total bacterial protein. The report has laid a basis for the development of molecular diagnostic antigen of PRRSV.

Abstract [PDF 197 KB] [Cited by]
Bovine spumavirus (BSV) 3026 China strain, which was isolated by authors, encodes the transcriptional transactivator Borf 1. The Borf 1 protein, as well as the BSV3026, can transactivate the gene expression directed by bovine immunodeficiency virus long terminal repeat (BIV LTR) in transient transfection assays. To identify the specific region in BIV LTR responsible for the Borf 1 action, it was examined that the effect of the Borf 1 on firefly luciferase (Luc) gene expression in transfected cells with a series of mutant pBIV LTR luc plasmids. The region between -410 and -115 from the transcription initiation site was identified as responsible for the transactivation by the Borf 1. However, the regions between -367 and -319 (NF B site), between -52 and +204, which are very important in the activation of BIV transcription, are dispensable for the Borf 1 mediated transactivation.

Identification and BiochemicaI Characteristics of a NeW Psittacine Virus in China

Abstract [PDF 208 KB] [Cited by]
The fermentation broth of yeast strain SH\-2?(FSH\-2) which could enhance the biological potency of human interferon alpha (huIFN ) was detected. Its enhancing ratio was 1.64～6.86 fold. A group of proteins was seperated and purified from the fermentation supernatant by chromatography on Sephadex G 75 and HPLC. Each protein showed the similar band on PAGE and SDS PAGE. Their molecular weights ranged from 52 to 72 kD. The proteins were stainded with periodic acid Schiff's agent. Lowry's method and sulfuric acid phenol method were respectively used to determine the contents of proteins and neutral sugars. The results showed the ratio of protein to sugar was 3∶1. These results indicated that the proteins were extracellular glycoproteins (YEGPs) secreted by yeast strain SH\-2. YEGPs could significantly enhance the biological potency of huIFN . It was veritied by the experiment of cytopathic effect inhibition in Wish cells. The enhancing ratios were 1.6～2.8 fold and 1.4～4.0 fold, respectively. The enhancing