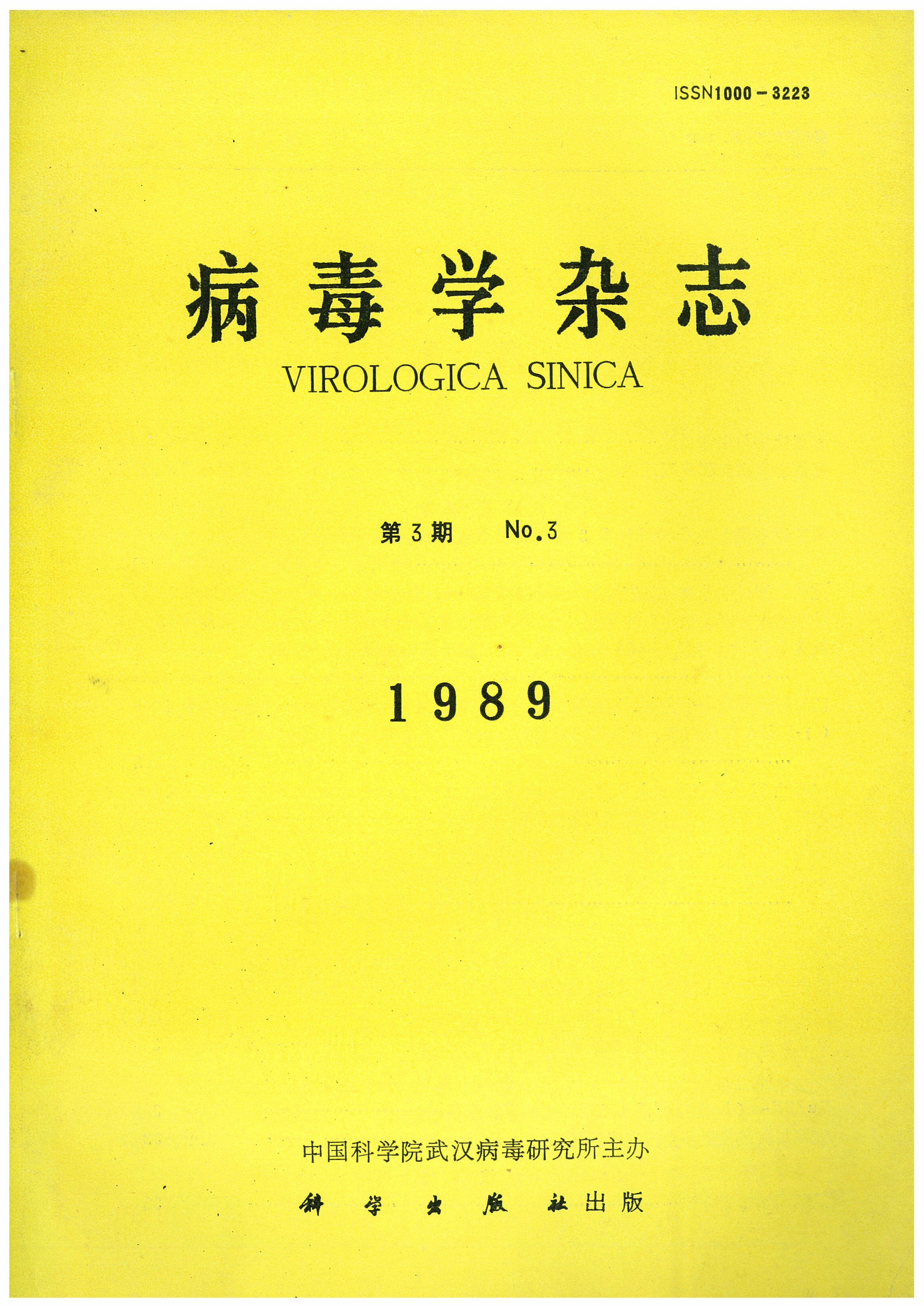 The Advances of Researches in Bee Paralysis Virus

Abstract [PDF 178 KB] [Cited by]
An experimental acute myocarditis caused hy Coxsaekie B-3 virus(CB_3V)was developed in male BALB/c mice 4 weeks of age. The animals were szc-rificed at the 7th day after infection, After gross examination, the heart was cut transversely into 3 pieces for light, electron microscopic examinations andvirus assay. In addition, myocardial lesions were also quantitatively measuredby image analysis. White spots, streaks or patches were seen on the surface of ventrieles ofhearts in the infected group (14 mice) .The...

Study on Vector Homology in Clinical Specimens with Cloned Probes

Abstract [PDF 148 KB] [Cited by]
Nucleic acid hybridization techniques using cloned probes (recombinantplasmids composed of viral fragment and bacterial plasmid vector, such as pBR322)are applied in assay of clinical specimen in research and diagnostic laborato-ries. They have simple, quick and sensitive adventages, and help to detectthose virus gene that are difficult or impossible to culture. However, it should be noted that there may be a homology problem between cloued probe and cli-nical specimens. We detected 213 specimens from 173 p...

Abstract [PDF 168 KB] [Cited by]
The DNA of Herpes Simplex Virus type 2 (HSV-2)digested with restrictionenzyme BamHI and the BamHI G fragment was isolated, which locates in thereverse repeat sequence and spans the junction site of L and S component.Then the BamHI G was inserted on the BamHI cut-site of the vector plasmidpUC 8. In order to modify this recombinant plasmid, the EcoRI--KPN I fra-gment of the recombinant plasmid was removed by restriction enzyme digestionwith EcoRI and KPN 1. After modification of the ends and ligation of them,...

Abstract [PDF 139 KB] [Cited by]
A rapid IgM antibody capture (RMAC) ELISA using enzyme labeled one ofthe species specific McAb 2H_4 as tracer was studied for the early diagnosis.The antibody thus obtained was confirmed specific, because it was destructableby 2-ME, could be blocked by JEV antigen, and had no cross reactivity with HFRS virus or adenovirus IgM antibody positive sera, as well as was notinterfered by RF. 10 serum specimens were tested for JEV-IgM by conventionalMAC-ELISA and RMAC-ELISA simultaneously, and the Iatter one was mo...

Abstract [PDF 145 KB] [Cited by]
In order to study the immune response of HB vaccine combined with BCGand DTP, 150 newborns of HBsAg negative. mothers were divided into threegroups and observed. Babies in groups 1 and 2 were given injection of 10μg,20μg HB vaccine respectively, group 3 had no HB vaccination. But all thethree group were given BCG and DTP by immune plan.The babies in group 1 and 2 whose anti-HBs reached the level of P/N≥5were 93.18% and 89.58% respectively. There is no statistical difference forthe two groups (P>0. 05). M...

Abstract [PDF 124 KB] [Cited by]
The inhibitory effect of (s)-9-(2, 3-dihydroxypropyl) adenine ((s)-DHPA)on infection of Epidemic Hemorrhagic Fever Virus (EHFV) J10 strain in su-ckling mice was observed. The experimental results showed that the morbidityrate (44.44 % and 55.17%) and infection rate (44.44% and 55.17%) of two(s)-DHPA treatment groups were markedly lower than that of the control group(83.33% and 86.96% respectively). Their differences were statistically signi-ficant. These results suggested that EHFV replication in suckling m...

Abstract [PDF 144 KB] [Cited by]
The susceptibility of human B lymphoblastoid cells to HFRS virus infectionwas studied. The results showed that the cells were productively infected byHFRS virus. The persistently infected cells had no obvious cytopathic effects andwere indistinguishable morphologically from uninfected cells. It was difficult toidentify complete virions in infected lymphoblasts by electron microscopy con-trasted with strong immunofluorescence staining for intracellular HFRS virusantigens observed in the majority of these cel...

Abstract [PDF 165 KB] [Cited by]
Out of 33 neonates with acute gastroenteritis, 12(36.4%) were detected tohave virus-like particles by electron microscopy once agian. The small roundvirus-like agent(SRV)was found in 11(33.3%)samples. In one sample other vi-rus-like particle was found. The SRV was confirmed to cause this neonatalacute gastroenteritis by ultrathin section and immune electron microscopy (IEM).The SRV was measured 26 nm in diameter and showed fine spiky structureon the surface. The buoyant density of SRV was determined to be 1...

Abstract [PDF 157 KB] [Cited by]
We established a stable human tonsillar cell culture-immunization systemin vitro, in which sheep red blood cells (SRBC), a virus-irrelevant antigen,induced efficiently specific antibody production. In contrast to traditional con-cepts, we demonstrated that adhering cells (mainly macrophages) in tonsilsplayed a suppressive role in induction of specific antibody response in vitro.Depletion of adhering cells increased significantly the production of this anti-body. We also found the SRBC co-stimulated with sui...

Abstract [PDF 151 KB] [Cited by]
The microslide gel double diffusion test was used to detect potato leaf-rollvirus (PLRV). It was found to be sufficiently sensitive for the detection ofPLRV in extracts of infected plants. A 1: 4 dilution of extract of PLRV infectedpotato stem could be detected unambiguously. The sensitivity of microslidewas compared with that of the Ouchterlony plate technique. The microslide te-chnique was capable of detecting 1 μg/ml of purified PLRV. This sensitivitywas sixfold as much as that of the Ouchterlony plate t...

Abstract [PDF 190 KB] [Cited by]
A virus was isolated from diseased sesame (Sesamum indicum) plantwith symptom of dwarf crinkle necrosis both on leaves and stems in Wuchang,Hubei in 1986.The plants of 43 species (cultivars) among 8 families were inoculated withthe virus isolate which can infect those of 14 species involved in 7 families,for instance, infecting Chenopodium amaranticolor, C. oinoa, Gomphrenaglobosa locally and Brassica campestris, Zinnia elegans systemically. My- zus persicae and Aphis craccivora transmitted the isolate in n...

Abstract [PDF 127 KB] [Cited by]
Some biological properties of Grass Carp Hemorrhage Virus (GCHV)-873have been studied in this report. This virus could make grass carp kidney cells(CIK) to produce a unique cytopathic effect. At 28℃ its logarithmic growthphase occured 12 to 48 hr after infection. The virus titer reached 1.78×10~(11)PFU/mlwhen the MOI was approximately 0.05PFU/cell. There were slight differencesin virus titer under incubation of 25℃, 28℃and 30℃ respectively, and thesimilar results in 5% CO_2 or in normal atmosphere.

Study on Small Dosages of HulFN--α (Le) Accompanied with Poly 1: C in the Treatment of Chronic Active Hepatitis

Abstract [PDF 86 KB] [Cited by]
The effectiveness of small dosages of interferon-α accompanied with PolyI: C in the treatment of chronic active hepatitis B is reported in this paper.40 cases of chronic active hepatitis B were rondomly divided into study groupand control group, 20 cases in each. The study group was treated with interfe-Ton-α(30,000 Uqd ) and poly I: C (2mg q 3 days) for 3 months, while control group was given symptomatic and supportive therapy only. The statusof HBsAg, HBeAg, Anti-HBs, Anti-HBe, Anti-HBc, HBV-DNA, TTT andS...