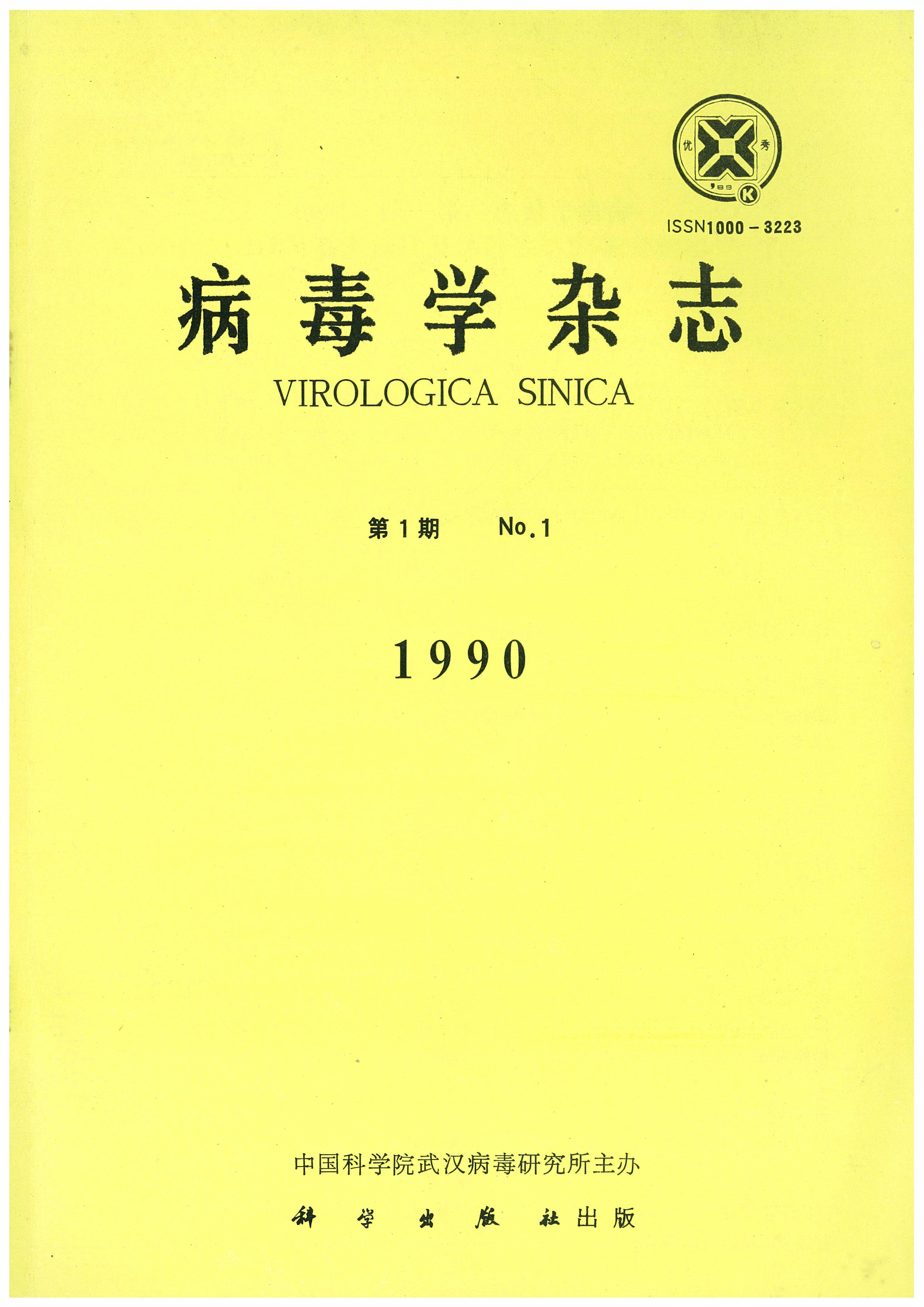 Abstract [PDF 146 KB] [Cited by]
Ten volunteers had been immunized intramuscularly(1 ml) three times at the 0, 7 and 28 days with the inactivatated(with 0.05%β-propiolactone) EHF Meriones unguiciculatus kidney culture vaccine with Z_(10) virus strain (kept at 4℃ for 7 months). The result showed that there had not been any side effects locally and generally in all of the volunteers. The EHF virus antibodies were detected in 9 and 8 volunteers with IFA and ELISA methods respectively and 9 volunteers were positive with RPHIA. And 4 volunteers...

A Study on Endemic Strain of EHFV(R36)in Shandong

Abstract [PDF 177 KB] [Cited by]
In this paper, it is reported that the result of isolated EHF virus R36 strain directly from the antigen positive lung by using Vero-E6 cell. Morphological identification is corresponding to EHF virus by EM and it is found that typical particle EHF virus inclusion bodies and size similar EHFV-like particle. By EHFV monoclonal antibody assay this virus strain was different from that of R22 in China. It has rattus R22-like antigenic determinant and apodemus 5H5 antigenic determinant.

Abstract [PDF 120 KB] [Cited by]
Epidemic hemorrhagic fever virus(EHFV) A9 strain was inoculated into peripheral blood samples of 10 normal persons for incubation and sister chromatid exchange (SCE) and chromosome abnormality of lymphocytes were examined, Three experimental groups, named A, B, and C according to different dosages of virus supernatant and one group without virus as control were used. The frequencies of SCE of group A(8.9±0.19), of group B(9.9±0.2), of group C(11.6±0.12) were each significantly higher than that of control gr...

Abstract [PDF 131 KB] [Cited by]
Two indirect immunofluorescent assays(IIFA), using a monoclonal antibody directed against protein antigen (McAb-20k)and specific positive sera of human cytomegalovirus(HCMV)respectively, were applied for the rapid detection of the virus from fifty urine specimens(28 cases)inoculated onto human embryonic fibroblast. By the former procedure g of 28 cases were positive at 48 hours postinfection and all of them developed cytopathic effect; by the latter 11 were positive at 6 days postinfection and only 10 cases...

Development of Method for the Detection of Enteroviruses from Clams

Abstract [PDF 117 KB] [Cited by]
A procedure for concentrating and recovering enteroviruses from clams (Arca( Anadara)subcrenata Lischke)has been developed and evaluated. Viruses were efficiently adsorbed to homogenized clam tissue by adjusting the homogenate to pH4.5. After low-speed centrifugation, the viruses were eluted from the sediment with pH 9.5 0.05mol/L glycine-saline. Instead of using Cat-Floc in Johnson s method, AlCl_3 was used to remove cytotoxity from clam tissue homogenates. After low-speed centrifugation, viruses were conc...

Isolation and Identification of Coxsackievirus A24 Variant from Outbreak of Acute Hemorrhagic Conjunctivitis, China

Abstract [PDF 181 KB] [Cited by]
An outbreak of acute hemorrhagic conjunctivitis occurred in Shashi, Hubei province, China, during july—november 1988. Estimating cases were in 17 thousand(7％) of 250 thousand population in the urban district. Virus was isolated in cultures of Hela cells from 28 of the 38 conjunctival swabs(74％). According to physico—chemical experiments and electron micrograph suggest that the viral isolates are enterovirus. All of the viral isolates were identified as an antigenic variant of coxsackievirus A24 by using of ...

Abstract [PDF 157 KB] [Cited by]
The paper reports observations on a cytoplasmic polyhedrosis virus (CPV) from Bombyx mori infecting Bombyx mori cells (Bm-N)by electron microscopy. In the early stage of infection, the electron dense virogenic stroma containing virions formed in the cytoplasm of infected cells. Inclusion bodies appea- red at periphery of the virogenic stroma at 48hr after infection. The large number of virions randomly embedded within the polyhedrin matrix. Polyhedra were tri-gonal, tetragonal, pentagonal and hexagonal in s...

Abstract [PDF 184 KB] [Cited by]
After being infected with Japanese encephalitis virus (JEV), the rhesus monkeys appeareda series of symptoms and signs, and finally died of exhaustion of respiration and circulation. Two days after the temperature rised upto 39℃, the. monoclonal antibodies (McAb) were injected for therapy. The results were finer with the survival rate of 100％ in different groups treated by intramuscular, intravenous, and subdural plus intramuscular injections. Among them, subdural plus intramuscular injections of the McAb w...

Abstract [PDF 145 KB] [Cited by]
The immunogencity was studied for three types of experimental inaetiva ted haemorrhagic fever with renal syndrome (HFRS)vaccine, two tissue cul ture vaccines made from Mongolian Gerbil kidney and hamster kidney and one purified mouse brain vaccine. The M Gerbil kidney cell vaccine was made with Z_(10) virus strain (Apodemus type )and inactivated by β-propiolactone. The mouse brain vaccine made with LR1 virus strain(Apodmus type)and the hamster kidney cell vaccine made with a combination of Apodmus type viru...

Abstract [PDF 131 KB] [Cited by]
In this paper, followed-up observation during half to 2 years was taken in 20 cases with chronic hepatitis B who had been treated by combining small dosage of interferon with thymosin. Another 13 cases of chronic hepatitis B were treated only with interferon in the same dosage and period. The results showed that the negative percentage of HBeAg, HBeAg, DNAP, HBV-DNA were 58.8％, 60％, 60％ and 66.6％ respectively in the treated group. In the contrast group, the negative percentage of the same marks was 50％, 50％...

Abstract [PDF 99 KB] [Cited by]
Tomato virus disease is an imperative problem for tomato production in the Tianjin suburbs. In 1986—87, using 13 antisera as antibodies, we detected 453 antigen samples of tomato by ELISA, finding that the main strain types were TMY(38.19％), CMV (30.91％), PVY(11.70％)and PVX (9.71％). And it was the first time for us to detect Tomato Black Ring Virus (TBRV) and Velvet Tobacco Mottle Virus (VTMoV) in tomato ever reported in China. Two undetermined rod-shaped particles observed by electron microscope were calle...

Abstract [PDF 177 KB] [Cited by]
Turnip mosaic virus strains differentiation in the United States and Taiwan province of China were identified by Provvidenti, R. (1980)and Green, S K. (1985) with a set of the same differential hosts. Green s identification methods were applied in this experiment. Nineteen major isolates of TuMV were identified under the same controlled conditions. These nineteon isolates were identified and screened from 7982 TuMV samples collected from ten regions of China. The identifying result indicated that TuMV Hei-3...

Abstract [PDF 322 KB] [Cited by]
A virus isolate M-4 is obtained from alfalfa plant with yellow spot mosaic in Xingjiang. The M-4 isolate could cause systematic mosaic on many kinds of Leguminosae plants and give local chlorosis spots on Chenopodiaceae plants The virus is easily to be transmitted by sap and aphis inoculation, but not by bean seeds, The thermal death point is60—65℃; the dilution end point is 10~(-3)—10~(-4) and the longevity in vitro is 4—5 days The size of the filament particles is about 660—740×15nm in purified virus prep...

Abstract [PDF 148 KB] [Cited by]
ELISA method was used to detect seed-born rate of SMV to sowing the plots which have different primary infection sources. The trap plants indexing daily infection rate and the green-pantraps monitoring alate aphids landing on soybeans were used to study SMV epidemiology. The results indicated the infection rate of SMV was determined by the number of virus acquisition aphids alighting on soybeans. The infection rate resulted from coordination between disease incidence and the number of aphids taking off and ...

Abstract [PDF 138 KB] [Cited by]
It is the first time in the present paper to report the propagation of duck plague virus (DPV-Ⅰ) and gosling plagae virus (GPV-Ⅰ) in the identical duck embryo, what have been revealed in the results are as follows: 1. Both DPV and GPV particles were detected under electronic microscope in the CAF of the duck embryoes infected with DPV-Ⅰ and GPV-Ⅰ. 2. CAF with viruses could produce eytopathic effect (CPE)in the duck embryonic blast (DEF)cell monolayers, showing the existence of DPV; and GPV antigens were det...

Abstract [PDF 87 KB] [Cited by]
It has been found that the extracting solution of Banlangen (Isatis indigotica)can evidently inhibit TMV increase in Nicotiana tabacum and reduce the extent of the disease of plants inoculated with TMV. The disease index of the treated plants is under 60, while that of the contrasted plants is above 80. The results of the detections on the 10th day after the plants were inoculated 10~(-5) TMV showed that the TMV consistency is 10~(-6) in the treated plants and there were nearly no local lesions on Nicotiana...

Abstract [PDF 103 KB] [Cited by]
This paper presents a developed immunogold electron microscopic technique, i.e. the centrifugal method for rapid identifcation of animal viruses, The centrifugal method was found to be more satisfactory than the mixing and drop methods with less nonspecific reactions and high sensitivity for routine rapid identification of animal viruses.