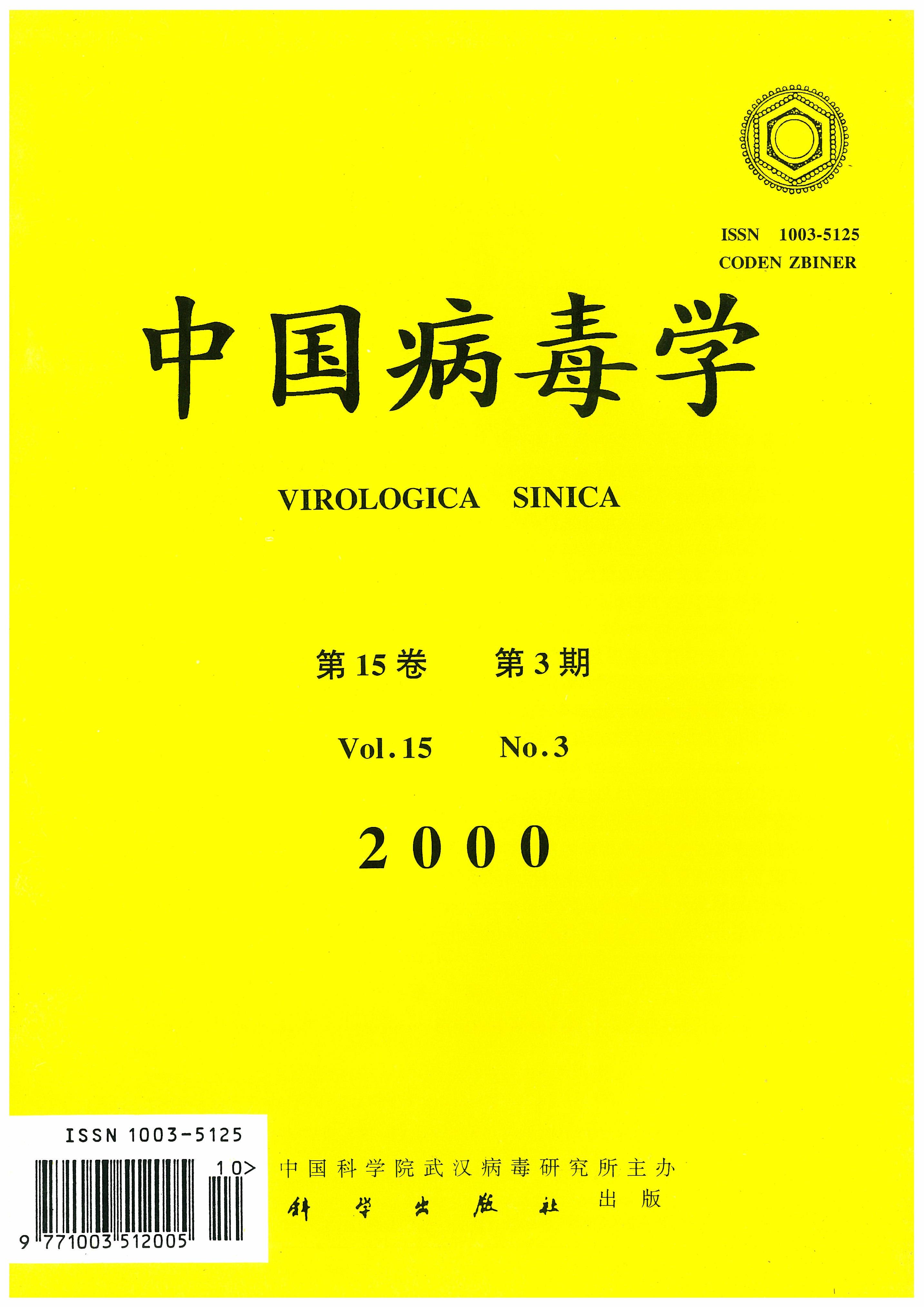 Abstract [PDF 140 KB] [Cited by]
Poorly differentiated nasopharyngeal carcinoma (SUNE 1) cell line was cultured with Epstein Barr virus (EBV) BHRF1, DNase, thymidine kinase (TK) and nuclear antigen 1 (EBNA1) antisense oligodeoxynucleotide (ASO) for 48 h respectively. Inhibited proliferation of SUNE 1 was only observed in the absence of fetal calf serum (FCS) and exposed to EBV BHRF1 ASO. The results from electron microscopy and agarose gel electrophoresis indicated that apoptosis only appeared in SUNE 1 cells exposed to BHRF1 ASO and absence of FCS. The other 3 kinds of EBV ASOs had not the similar effects at the same concentration.

Abstract [PDF 128 KB] [Cited by]
Recently, a novel virus named TT Virus has been identified in serum from patients with elevated ALT levels and others. TTV was detected by PCR using a set of primers from conserved region in the TTV genome. cloning and sequencing of the amplifications in 15 cases of Chinese blood donors and dialysis patients were carrited out. Sequence comparison within 271 base pairs in the region between positions 1915 and 2185 showed homology rates varying from 66.8% to 99.3% among 15 Chinese isolates, and from 66.1% to 97.4% between Chinese strains and TTV isolates from Japanese isolates sequenced. This result suggests that a new sub genotype existes in Chinese TTV isolates.

Expression of Truncated HTNV Nncleoprotein and Analysis of Antigenic epitope

Abstract [PDF 161 KB] [Cited by]
The expressing vector carring various truncated fragments of S gene of HTNV strain 76 118 was constructed and the vector efficienly expressed in E.coli . The result demonstrated that the GST NP fusion proteins exist in the form of inclusion bodies in E.coli , the expressing amount accounted for 29 36% of the total proteins, and the molecular weights were 72 kD, 66 kD, 54 kD and 44 kD, respectively. Western blot showed that all of the four fusion proteins were positive stained with HPR labeled anti GST McAb 3C11, but only the 72 kD and 54 kD fusion proteins were positive stained with HRP labeled anti NP McAb 1A8. Four recombinant NP (rNP), which molecular weights were 44 kD, 40 kD, 26 kD and 16 kD respectively, were obtained by removing GST from purified GST NP fusion proteins with thrombin. Mapping of antigenic epitope was done by 19 strains McAb. The result showed that 72 kD fusion protein could react with 13 strains McAb, which was same as authentic NP of HTNV. The truncated fusion protein (d

Studies on the Purification of OPV and its Characterization

Abstract [PDF 177 KB] [Cited by]
Q Sepharose F.F. was adopted to purify the suspension of oral poliovaccine (OPV), which is prepared from Vero cells. After clarification and concentration by ultrafiltration, the recovery of virus infected titre may attain above 85%. Using column chromatography on Q Sepharose F.F. to purify the concentrated virus suspension, the purified viruses attain 100% recovery of virus infectivity. Dot membrane hybridization was used to detect DNA with the probe of Vero cell genome DNA which was labed with 32 P dATP, the contents of residual substrate DNA was less than 100 pg/dose. The process of downstream had no significant influence on some biologiccal characters of purified viruses, such as virus morphology, tumorigenicity, rct/40 character and capsid protein. The results indicate that Q Sepharose F.F. is an ideal chromatography material for purifying OPV prepared from Vero cells.

Abstract [PDF 154 KB] [Cited by]
The serum from patients infected with Hepatitis E was prepared, the RNA of Hepatitis E virus was purified. The interested cDNA fragment (1.3?kb) was obtained by RT PCR, cloned in to the plasmid pUC18 and sequenced by the dideoxynucleotide method (fluorescein labeled dNTP). The result of sequencing suggested that the cDNA fragment was 1?309?bp, its adenine, guanine, thymine and cytosine were 249 (19.2%), 318(24.29%), 339(25.9%) and 403(30.79%), respectively. The nucleic acid sequences of the cDNA were 92% to 93.3% homologous to the Indian and Burmese strains, 90.7% and 77.4% homologous to Chad and Mexican strains. The ORF2 of HEV is relatively stable between the Asian strains.

Abstract [PDF 225 KB] [Cited by]
According to the genomic sequence of PLRV S, two pairs of specific primers were designed and synthesized. The cDNA of the replicase gene of PLRV Chinese isolate (PLRV Ch) was synthesized and amplified by RT PCR using the viral RNA as a template. The synthesized 3 and 5 cDNA fragments of PLRV Ch replicase gene were inserted into pUC 19 and cloned in E.coli JM109 and sequenced respectively. The homology of nucleotide sequences between PLRV Ch and PLRV S (Scotland, UK), PLRV N (Netherlands), PLRV C (Canada), PLRV A (Australia) are 98.8%, 97.7%, 97.8% and 96.2%, and the homology of putative amino acid sequences are 98.9%, 97.4%, 97.6% and 95.8% respectively. In 5 region of replicase gene a slippery sequence (heptanucleotide motif) for 1 frameshift and its down stream stemloop or pseudoknot, and upstream nucleotide sequence repeats were found. Authors suggested that the nucleotide repeat sequences characteristic for PLRV could form a tight successively folded complementary double stranded re

Abstract [PDF 241 KB] [Cited by]
Four kinds of eukaryotic expressing plasmids of classical swine fever virus (CSFV) E2 gene, either containing or lacking the signal sequence and transmembrane region sequence, were constructed. The antibodies against CSFV were induced after immunization of mice by intramuscular (IM) injection with the plasmids of E2 gene with a signal sequence, pcDST and pcDSW, but not with the plasmids of E2 gene lacking a signal sequence, pcDWT and pcDWW. The level of antibodies elicited by pcDSW lacking transmembrane region sequence was higher than that elicited by pcDST with transmembrane region sequence. The results indicated the plasmid expressing a secreted antigen may be more efficient for induction of immune response when administered by IM injection than that expressing non secreted antigen. Immunization with pcDSW could protect rabbits against challenge with at least 10 MID hog cholera lapinized virus (HCLV) and protect pig from the challenge of lethal dose of CSFV strain, Shimenmen.

Abstract [PDF 128 KB] [Cited by]
Primers for RT PCR were designed on the basis of the M and N gene sequences of U. S. isolate of PRRSV. The primers have restriction endonuclease ( Eco R I and Bam H I) sites. The tissues of stillborn fetuses of affected swine were detected by RT PCR in 4 pig farms. The samples were RT PCR positive. A gene fragment about 918 bp was amplified by RT PCR, PRRSV were isolated from the tissues of stillborn fetuses. The result showed that PRRSV can be quickly diagnosed by RT PCR, which laid a basis for quick diagnosis of PRRS and further research of the PRRSV isolates of our country.

Abstract [PDF 171 KB] [Cited by]
The cDNA sequence encoding porcine growth hormone (pGH) was inserted into the plasmid of pBluescript M13( ). The sequening results showed that a 984 base pair fragment is identical to that reported by Seeburg et al ., with the exception of one different base pair in the ORF. Then, a baculovirus recombinant vector (pX3/4 pGH) with the pGH ORF was constructed and cotransfected Hi 5 cells with the linearized parental virus (AcMNPV OCC -) DNA to produce the recombinant virus AcMNPV pX3/4 pGH OCC +, in which the pGH gene was driven by the synthetic and XIV promoters. The SDS PAGE and Western blot analysis showed that the pGH gene product, 20.7 kDa fusion protein, was obtained. The expressed pGH accumulated up to about 4.48% of the soluble cellular proteins as estimated by CS 930 scanning of the SDS PAGE gel stainning by Coomassie Brilliant Blue R250.

Abstract [PDF 170 KB] [Cited by]
The sequence analysis of the haemagglutinin (H) protein gene of giant panda strain of canine distemper virus (CDV) from giant panda in China was conducted and compared with Onderstepoort vaccine strain. Four pairs of primers were designed and synthesized. The PCR products amplified from GP strain were directly sequenced after they were purified. There are 1?946 nt of the complete H gene. The H gene of the GP strain showed that the largest open reading frame (ORF) encoding a protein of 607 amino acid residues started at the ATG at position 21 23 and extended to a termination codon (TGA at position 1?842 1?844). The deduced amino acid sequence of the H protein of the GP strains was compared with the CDV vaccine Onderstepoort strain extracted from the GenBank database. The sequence of the H gene and deduced H protein of the GP strain showed an identity of 91.4% and 90.2% with Onderstepoort strain, respectively. All the 12 cysteine residues found in the GP strain H protein were conserved in Onderstepoort strai

Abstract [PDF 135 KB] [Cited by]
An icosahedral virus was found in the ultra thin section of spleen, kidney, liver, gill of the outbreak infectious Siniperca chuatsi by electron microscope. The virions of section show hexagon, about 125 150 nm in diameter, and have envelope outside. Cell culture indicated that CIK cell was sensitive to the virus, which was isolated from the internal organs of Siniperca chuatsi. The CPE can be seen after being infected for 36 48 hours at 28℃. Cell cultured virus suspension is infectious and can be subcultured steadily in CIK cell line. Many virions isolated by different centrifugation from infected cell culture can be observed by negative stained electron microscope method, but no virions were detected in the control samples.

Abstract [PDF 184 KB] [Cited by]
Degenerated oligonucleotides were designed from one motif VYGDTDS of several viral DNA polymerases and were labelled with Digoxigenin to screen DNA polymerase gene in a White Spot Syndrome Virus (WSSV) DNA library. One Eco R I fragment of 707 bp was selected and contains a putative open reading frame in which the motif YGDTDS of family B of DNA polymerase was found. This selected sequence was subsequently compared with GenBank data. The results showed that this deduced amino acids sequence has some similarities with several algal like virus of the family Phycodnavirus. So we deduced that this is one DNA polymerase gene fragment of WSSV.

Abstract [PDF 125 KB] [Cited by]
Full length NS3 gene of a hepatitis C virus was amplified by PCR using plasmid pBAC25 containing HCV nonstructural protein gene as template. The amplified fragment (about 1.8 kb) was cloned into plasmid pQE30 and the recombinant plasmid was expressed in JM109. The NS3 protein was purified by NiSO 4 metal chelating resin, and its antigenecity was determined by ELISA, the results showed that the full length NS3 protein was more sensitive than the commercial carboxy terminal domain of NS3 protein in HCV antibody detection.