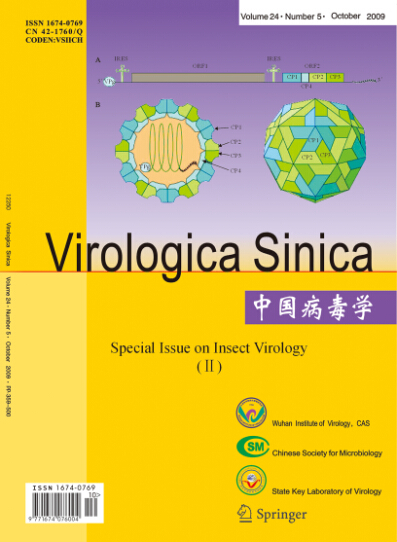 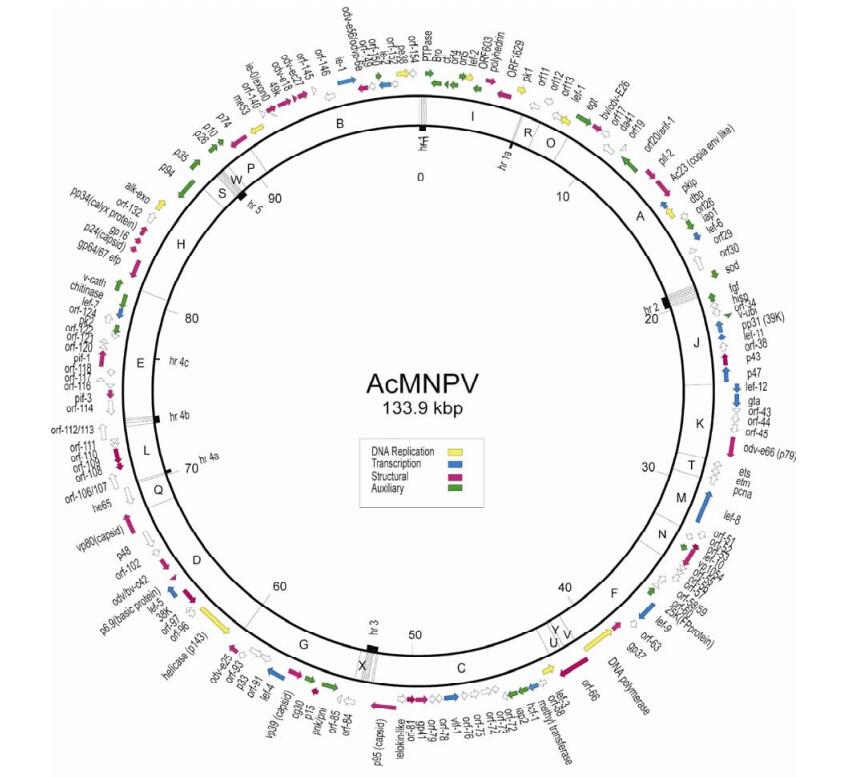 Cohen David P. A., Marek Martin, Davies Bryn G., Vlak Just M. and Monique M. van Oers. Encyclopedia of Autographa californica Nucleopolyhedrovirus Genes[J]. Virologica Sinica, 2009, 24(5): 359-414. doi: 10.1007/s12250-009-3059-7.
The Autographa californica multiple capsid nucleopolyhedrovirus (AcMNPV) was the first baculovirus for which the complete nucleotide sequence became known. Since then 15 years lapsed and much research has been performed to elucidate putative functions of the annotated open reading frames of this virus and this endeavour is still ongoing. AcMNPV is the most well-known and well-studied baculovirus species, not in the least for its application as a vector for the high-level expression of foreign genes in insect cells. This article is the first monograph of a single baculovirus and gives a current overview of what is known about the 151 AcMNPV ORFs, including (putative) function and temporal and spatial presence of transcripts and protein. To date 60 ORFs have a proven function, another 19 ORFs have homologs for which functions are known in other baculoviruses and 72 ORFs are still enigmatic. This paper should assist the reader in quickly finding the essentials of AcMNPV. 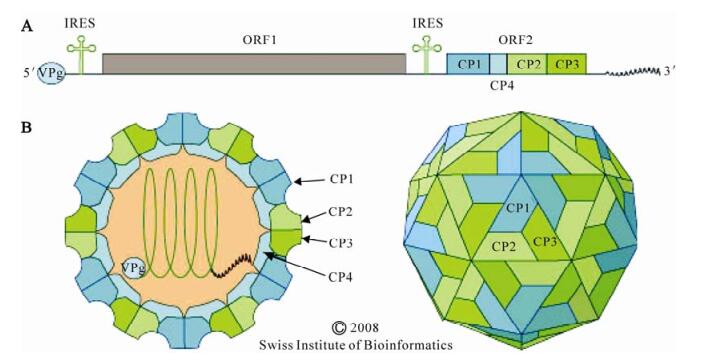 The Dicistroviridae: An Emerging Family of Invertebrate Viruses

Bryony C. Bonning. The Dicistroviridae: An Emerging Family of Invertebrate Viruses[J]. Virologica Sinica, 2009, 24(5): 415-427. doi: 10.1007/s12250-009-3044-1.
Dicistroviruses comprise a newly characterized and rapidly expanding family of small RNA viruses of invertebrates. Several features of this virus group have attracted considerable research interest in recent years. In this review I provide an overview of the Dicistroviridae and describe progress made toward the understanding and practical application of dicistroviruses, including (i) construction of the first infectious clone of a dicistrovirus, (ii) use of the baculovirus expression system for production of an infectious dicistrovirus, (iii) the use of Drosophila C virus for analysis of host response to virus infection, and (iv) correlation of the presence of Israeli acute paralysis virus with honey bee colony collapse disorder. The potential use of dicistroviruses for insect pest management is also discussed. The structure, mechanism and practical use of the internal ribosome entry site (IRES) elements has recently been reviewed elsewhere. 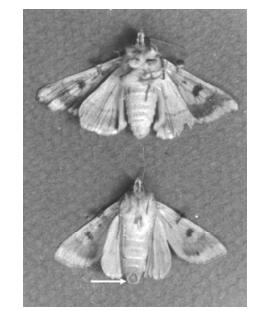 P. Burand John. The Sexually Transmitted Insect Virus, Hz-2V[J]. Virologica Sinica, 2009, 24(5): 428-435. doi: 10.1007/s12250-009-3046-z.
Hz-2V is one of only a very few sexually transmitted viruses currently known in insects. Replication of this insect pathogenic virus results in sterility of infected moths rather than mortality. The sterility of the infected host is a consequence of virus directed malformation of adult reproductive tissues, which in females results in cellular proliferation and hypertrophy of these tissues. Virus replication has additional ramifications in infected females. Infected females produce more mating pheromones and attract more mates than healthy females, ultimately facilitating virus transmission and enhancing viral fitness. The molecular mechanisms used by the virus to manipulate the host to enhance its fitness are yet to be determined. Unraveling the underlying principles of these mechanisms promises to enhance our understanding of insect reproductive physiology, as well as provide molecular tools for use in novel approaches in sterile insect control programs.

Thiem Suzanne M. and Xiao-Wen Cheng. Baculovirus Host-Range[J]. Virologica Sinica, 2009, 24(5): 436-457. doi: 10.1007/s12250-009-3058-8.
Baculoviruses are used as microbial insecticides, protein expression vectors, epitope display platforms, and most recently as vectors for gene therapy. Understanding the mechanisms that control baculovirus host-range and tissue tropisms are important for assessing their safety and for improving their properties for these biotechnology applications. In the past two decades some progress has been made and several baculovirus genes that influence host-range have been identified. Despite this progress, our understanding of the underlying mechanisms that restrict baculovirus host-range is still limited. Here we review what is currently known about baculovirus genes that influence virus host-range. 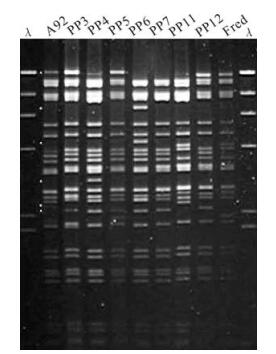 Genetic Variation in Field Populations of Baculoviruses: Mechanisms for Generating Variation and Its Potential Role in Baculovirus Epizootiology

Erlandson Martin A.. Genetic Variation in Field Populations of Baculoviruses: Mechanisms for Generating Variation and Its Potential Role in Baculovirus Epizootiology[J]. Virologica Sinica, 2009, 24(5): 458-469. doi: 10.1007/s12250-009-3052-1.
Baculoviridae is a family of insect-specific DNA viruses that have been used as biological control agents for insect pest control. In most cases these baculovirus control agents are natural field isolates that have been selected based on their infectivity and virulence. The advent of molecular tools such as restriction endonucleases, targeted polymerase chain reaction and new DNA sequencing strategies have allowed for efficient detection and characterization of genotypic variants within and among geographic and temporal isolates of baculovirus species. It has become evident that multiple genotypic variants occur even within individual infected larvae. Clonal strains of baculovirus species derived either by in vitro or in vivo approaches have been shown to vary with respect to infectivity and virulence. Many of the cell culture derived plague-purified strains have deletions that interrupt egt expression leading to virus strains that kill infected hosts more quickly. As well, in vitro clones often involve larger genomic deletions with the loss of pif gene function, resulting in strains deficient for oral infectivity. There are an increasing number of baculovirus species for which complete genome sequences are available for more than one strain or field isolate. Results of comparative analysis of these strains indicated that hr regions and bro genes often mark “hot spots” of genetic variability between strains and of potential recombination events. In addition, the degree of nucleotide polymorphisms between and within strains and their role in amino acid substitutions within ORFs and changes in promoter motifs is also beginning to be appreciated. In this short review the potential mechanisms that generate and maintain this genetic diversity within baculovirus populations is discussed, as is the potential role of genetic variation in host-pathogen interactions.
Research Article 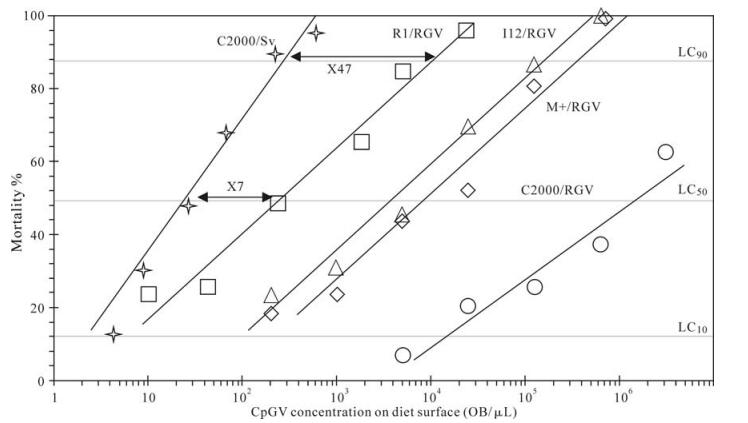 M. Berling, J. -B. Rey, S. -J. Ondet, Y. Tallot, O. Soubabère, A. Bonhomme, B. Sauphanor and M. Lopez-Ferber. Field Trials of CpGV Virus Isolates Overcoming Resistance to CpGV-M[J]. Virologica Sinica, 2009, 24(5): 470-477. doi: 10.1007/s12250-009-3056-x.
The Cydia pomonella granulovirus (CpGV) has been used for many years as biological agent for codling moth control in apple orchards. Resistance to the Mexican strain of CpGV was detected in orchards in Germany, France and Italy. A laboratory insect colony was started from insects collected in a French resistant orchard. It was named RGV. Various virus isolates were identified as active against this resistant insect colony. Field tests were carried out in 2007 to test if the two virus isolates CpGV-I12 and NPP-R1 were effective in the field. Although these virus isolates were not able to reduce insect caused fruit damages, they significantly reduced the overwintering insect populations. NPP-R1 was subjected to eight passages on RGV larvae (NPP-R1.8) that improved its biological activity on RGV larvae. 2008 field trials were set up to test this improved virus strain, compared to CpGV-I12 and Madex plus active on RGV. These tests confirmed the ability to control both in susceptible and resistant insect populations. 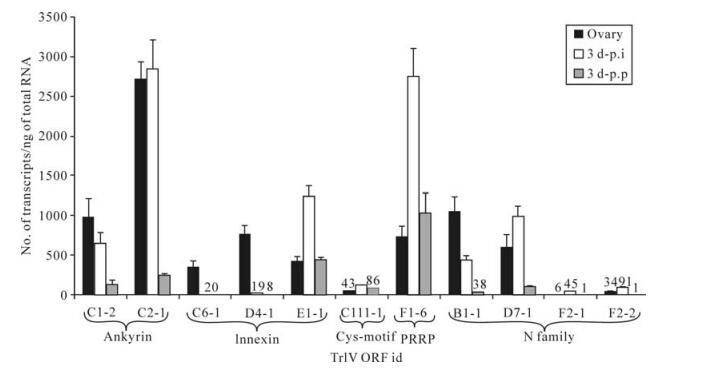 Asieh Rasoolizadeh, Frédéric Dallaire, Don Stewart, Catherine Béliveau, Renée Lapointe and Michel Cusson. Global Transcriptional Profile of Tranosema rostrale Ichnovirus Genes in Infected Lepidopteran Hosts and Wasp Ovaries[J]. Virologica Sinica, 2009, 24(5): 478-492. doi: 10.1007/s12250-009-3050-3.
The ichnovirus TrIV, transmitted by the endoparasitic wasp Tranosema rostrale to its lepidopteran host during oviposition, replicates asymptomatically in wasp ovaries and causes physiological dysfunctions in parasitized caterpillars. The need to identify ichnoviral genes responsible for disturbances induced in lepidopteran hosts has provided the impetus for the sequencing and annotation of ichnovirus genomes, including that of TrIV. In the latter, 86 putative genes were identified, including 35 that could be assigned to recognized ichnoviral gene families. With the aim of assessing the relative importance of each TrIV gene, as inferred from its level of expression, and evaluating the accuracy of the gene predictions made during genome annotation, the present study builds on an earlier qPCR quantification of transcript abundance of TrIV rep ORFs, in both lepidopteran and wasp hosts, extending it to other gene families as well as to a sample of unassigned ORFs. We show that the majority (91%) of putative ORFs assigned to known gene families are expressed in infected larvae, while this proportion is lower (67%) for a sample taken among the remaining ORFs. Selected members of the TrV and rep gene families are shown to be transcribed in infected larvae at much higher levels than genes from any other TrIV gene family, pointing to their likely involvement in host subjugation. In wasp ovaries, the transcriptional profile is dominated by a rep gene and a member of a newly described gene family encoding secreted proteins displaying a novel cysteine motif, which we identified among previously unassigned ORFs. 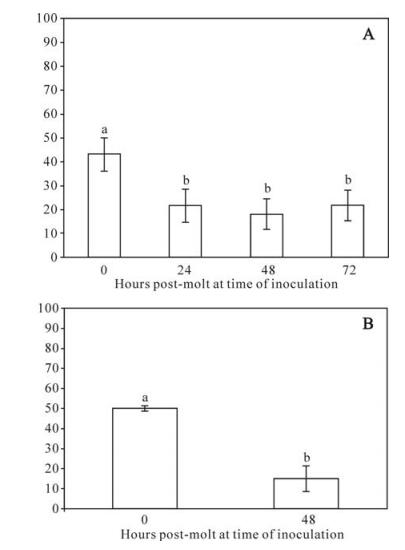 Kelli Hoover and Michael J. Grove. Specificity of Developmental Resistance in Gypsy Moth (Lymantria dispar) to two DNA-Insect Viruses[J]. Virologica Sinica, 2009, 24(5): 493-500. doi: 10.1007/s12250-009-3053-0.
Gypsy moth (Lymantria dispar) larvae displayed marked developmental resistance within an instar to L. dispar M nucleopolyhedrovirus (LdMNPV) regardless of the route of infection (oral or intrahemocoelic) in a previous study, indicating that in gypsy moth, this resistance has a systemic component. In this study, gypsy moth larvae challenged with the Amsacta moorei entomopoxvirus (AMEV) showed developmental resistance within the fourth instar to oral, but not intrahemocoelic, inoculation. In general, gypsy moth is considered refractory to oral challenge with AMEV, but in this study, 43% mortality occurred in newly molted fourth instars fed a dose of 5×106 large spheroids of AMEV; large spheroids were found to be more infectious than small spheroids when separated by a sucrose gradient. Developmental resistance within the fourth instar was reflected by a 2-fold reduction in mortality (18%-21%) with 5×106 large spheroids in larvae orally challenged at 24, 48 or 72 h post-molt. Fourth instars were highly sensitive to intrahemocoelic challenge with AMEV; 1PFU produced approximately 80% mortality regardless of age within the instar. These results indicate that in gypsy moth, systemic developmental resistance may be specific to LdMNPV, reflecting a co-evolutionary relationship between the baculovirus and its host.