Fu-sen LIN, Qiong DING, Hong GUO and Alan C. ZHENG. The Herpes Simplex Virus Type 1 Infected Cell Protein 22[J]. Virologica Sinica, 2010, 25(1): 1-7. doi: 10.1007/s12250-010-3080-x.
As one of the immediate-early (IE) proteins of herpes simplex virus type 1 (HSV-1), ICP22 is a multifunctional viral regulator that localizes in the nucleus of infected cells. It is required in experimental animal systems and some nonhuman cell lines, but not in Vero or HEp-2 cells. ICP22 is extensively phosphorylated by viral and cellular kinases and nucleotidylylated by casein kinase II. It has been shown to be required for efficient expression of early (E) genes and a subset of late (L) genes. ICP22, in conjunction with the UL13 kinase, mediates the phosphorylation of RNA polymerase II. Both ICP22 and UL13 are required for the activation of cdc2, the degradation of cyclins A and B and the acquisition of a new cdc2 partner, the UL42 DNA polymerase processivity factor. The cdc2–UL42 complex mediates postranscriptional modification of topoisomerase IIα in an ICP22-dependent manner to promote L gene expression. In addition, ICP22 interacts with cdk9 in a Us3 kinase dependent fashion to phosphorylate RNA polymerase II. 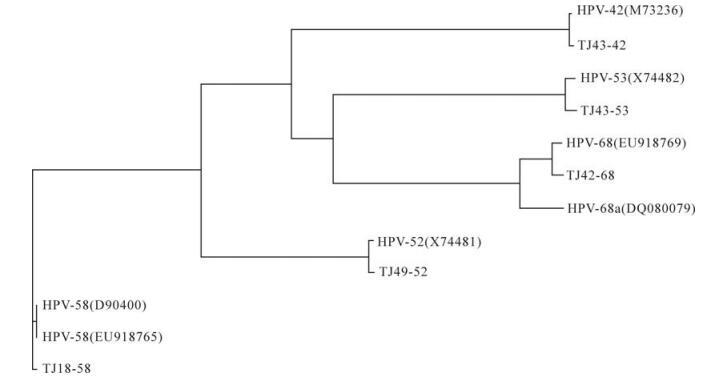 Detection of HPV Types and Neutralizing Antibodies in Women with Genital Warts in Tianjin City, China 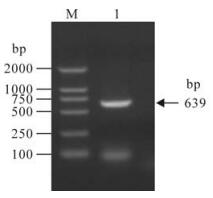 Shan-dian GAO, Jun-zheng DU, Hui-yun CHANG, Guo-zheng CONG, Jun-jun SHAO, Tong LIN, Shuai SONG and Qing-ge XIE. B Cell Epitopes within VP1 of Type O Foot-and-mouth Disease Virus for Detection of Viral Antibodies[J]. Virologica Sinica, 2010, 25(1): 18-26. doi: 10.1007/s12250-010-3041-4.
In this study, the coding region of type O FMDV capsid protein VP1 and a series of codon optimized DNA sequences coding for VP1 amino acid residues 141-160 (epitope1), tandem repeat 200-213 (epitope2 (+2)) and the combination of two epitopes (epitope1-2) was genetically cloned into the prokaryotic expression vector pPROExHTb and pGEX4T-1, respectively. VP1 and the fused epitopes GST-E1, GST-E2 (+2) and GST-E1-2 were successfully solubly expressed in the cytoplasm of Escherichia coli and Western blot analysis demonstrated they retained antigenicity. Indirect VP1-ELISA and epitope ELISAs were subsequently developed to screen a panel of 80 field pig sera using LPB-ELISA as a standard test. For VP1-ELISA and all the epitope ELISAs, there were clear distinctions between the FMDV-positive and the FMDV-negative samples. Cross-reactions with pig sera positive to the viruses of swine vesicular disease virus that produce clinically indistinguishable syndromes in pigs or guinea pig antisera to FMDV strains of type A, C and Asia1 did not occur. The relative sensitivity and specificity for the GST-E1 ELISA, GST-E2 (+2), GST-E1-2 ELISA and VP1-ELISA in comparison with LPB-ELISA were 93.3% and 85.0%, 95.0% and 90%, 100% and 81.8%, 96.6% and 80.9% respectively. This study shows the potential use of the aforementioned epitopes as alternatives to the complex antigens used in current detection for antibody to FMDV structural proteins 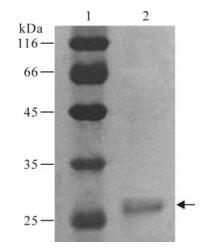 Jia LIU, Yan YANG, Bin HU, Zhi-yong MA, Hong-ping HUANG, Yuan YU, Shen-pei LIU, Meng-ji LU and Dong-liang YANG. Development of HBsAg-Binding Aptamers that bind HepG2.2.15 cells via HBV surface antigen[J]. Virologica Sinica, 2010, 25(1): 27-35. doi: 10.1007/s12250-010-3091-7.
Hepatitis B virus surface antigen (HBsAg), a specific antigen on the membrane of Hepatitis B virus (HBV)-infected cells, provides a perfect target for therapeutic drugs. The development of reagents with high affinity and specificity to the HBsAg is of great significance to the early-stage diagnosis and treatment of HBV infection. Herein, we report the selection of RNA aptamers that can specifically bind to HBsAg protein and HBsAg-positive hepatocytes. One high affinity aptamer, HBs-A22, was isolated from an initial 115 mer library of ~1.1×1015 random-sequence RNA molecules using the SELEX procedure. The selected aptamer HBs-A22 bound specifically to hepatoma cell line HepG2.2.15 that expresses HBsAg but did not bind to HBsAg-devoid HepG2 cells. This is the first reported RNA aptamer which could bind to a HBV specific antigen. This newly isolated aptamer could be modified to deliver imaging, diagnostic, and therapeutic agents targeted at HBV-infected cells.

Immunogenicity of the Spike Glycoprotein of Bat SARS-like Coronavirus

Yu-xuan HOU, Cheng PENG, Zheng-gang HAN, Peng ZHOU, Ji-guo CHEN and Zheng-li SHI. Immunogenicity of the Spike Glycoprotein of Bat SARS-like Coronavirus[J]. Virologica Sinica, 2010, 25(1): 36-44. doi: 10.1007/s12250-010-3096-2.
A group of SARS-like coronaviruses (SL-CoV) have been identified in horseshoe bats. Despite SL-CoVs and SARS-CoV share identical genome structure and high-level sequence similarity, SL-CoV does not bind to the same cellular receptor as for SARS-CoV and the N-terminus of the S proteins only share 64% amino acid identity, suggesting there are fundamental differences between these two groups of coronaviruses. To gain insight into the basis of this difference, we established a recombinant adenovirus system expressing the S protein from SL-CoV (rAd-Rp3-S) to investigate its immune characterization. Our results showed that immunized mice generated strong humoral immune responses against the SL-CoV S protein. Moreover, a strong cellular immune response demonstrated by elevated IFN-γ and IL-6 levels was also observed in these mice. However, the induced antibody from these mice had weaker cross-reaction with the SARS-CoV S protein, and did not neutralize HIV pseudotyped with SARS-CoV S protein. These results demonstrated that the immunogenicity of the SL-CoV S protein is distinct from that of SARS-CoV, which may cause the immunological differences between human SARS-CoV and bat SL-CoV. Furthermore, the recombinant virus could serve as a potential vaccine candidate against bat SL-CoV infection.

Peng-fei WEI, Yan-jun LUO, Tian-xian LI, Hua-lin WANG, Zhi-hong HU, Fu-chun ZHANG, Yu-jiang ZHANG, Fei DENG and Su-rong SUN. Serial Expression of the Truncated Fragments of the Nucleocapsid Protein of CCHFV and Identification of the Epitope Region[J]. Virologica Sinica, 2010, 25(1): 45-51. doi: 10.1007/s12250-010-3067-7.
The Crimean-congo hemorrhagic fever virus (CCHFV) is a geographically widespread fatal pathogen. Identification of the epitope regions of the virus is important for the diagnosis and epidemiological studies of CCHFV infections. In this study, expression vectors carrying series truncated fragments of the NP ( nucleocapsid protein ) gene from the S fragment of CCHFV strain YL04057 were constructed. The recombinant proteins were expressed in E.coli and purified for detection. The antigenic of the truncated fragments of NP was detected with a polyclonal serum (rabbit) and 2 monoclonal (mAbs)（14B7 and 43E5）against CCHFV by Western-blot analyses. The results showed that the three expressed constructs, which all contained the region 235AA to 305AA could be detected by mAbs polyclonal serum. The results suggest that region 235-305 aa of NP is a highly antigenic region and is highly conserved in the NP protein

Sui GAO, Ming WANG, Jian-wen GUO, Dong Xi, Xiao-ping LUO and Qin NING. Construction of mTNFR1shRNA Plasmid and its Biological Effects on MHV-3 Induced Fulminant Hepatitis in BALB/cJ Mice[J]. Virologica Sinica, 2010, 25(1): 52-58. doi: 10.1007/s12250-010-3072-x.
Previous study on TNFR1-mediated hepatocyte apoptosis has been implicated in the development of fulminant viral hepatitis. To interfere with the potentially effective target, plasmid named p-mTNFR1shRNA complimentary to the sequence responsible for mTNFR1 was also constructed and further confirmed by sequence analysis. To investigate the effect of mTNFR1shRNA plasmid on mTNFR1 expression in vivo and the disease progress in MHV-3 induced fulminant hepatitis mice model. By hydrodynamic injection of mTNFR1shRNA plasmid, the survival rate of mice, hepatic pathological change were examined and compared between mice with/without mTNFR1shRNA plasmid intervention. The expression of mTNFR1 was detected by Real-time PCR, immunohistochemistry staining. The mTNFR1shRNA plasmid significantly reduced mTNFR1 expression in vivo, markedly ameliorates inflammatory infiltration, prolonged the survival time period and elevated the survival rate from 0 up to 13.3% in Balb/cJ mice with MHV-3 induced fulminant hepatitis. This study was designed to explore the opportunity of RNA interference technique in inhibiting TNFR1 expression, which has been reported to be involved in the development of a variety of diseases including fulminant viral hepatitis and severe chronic hepatitis B.
BRIEF REPORTS 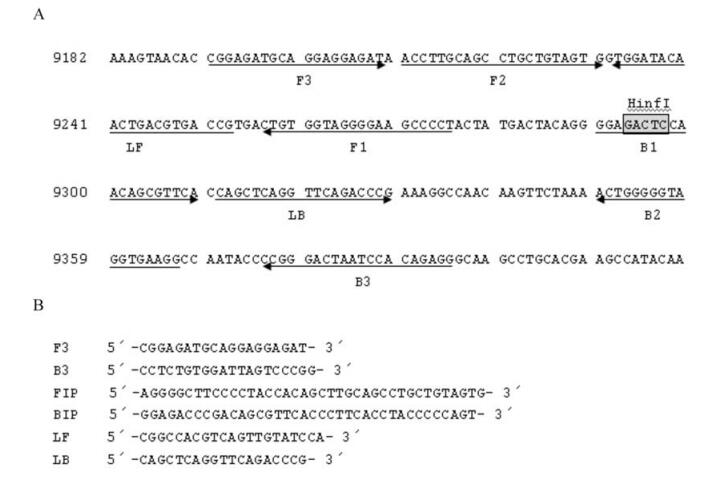 Lei CHEN, Xue-zheng FAN, Qin WANG, Lu XU, Qi-zu ZHAO, Yuan-chen ZHOU, Jun LIU, Bo TANG and Xing-qi ZOU. A Novel RT-LAMP Assay for Rapid and Simple Detection of Classical Swine Fever Virus[J]. Virologica Sinica, 2010, 25(1): 59-64. doi: 10.1007/s12250-010-3043-2.
A simple and rapid assay for the detection of Classical swine fever virus (CSFV) was established using reverse transcription loop-mediated isothermal amplification (RT-LAMP). This study describes the amplification of the genomic RNA of CSFV under isothermal conditions (63℃) within one hour, using a set of six primers (two outer primers, two inner primers and two loop primers). This RT-LAMP assay showed 100-fold higher sensitivity than the standard RT-PCR method and identified eighteen additional positive cases that were negative when tested by RT-PCR. This RT-LAMP was able to detect all the 13 strains of CSFV but not the BVDV. PRRSV. SIV. PRV-PCV, thus showed a good specificity. Products amplified by RT-LAMP can be visualized by agarose gel electrophoresis and in addition, either as a white precipitate at the bottom of the tube after a pulse spin or as a color change when dyed with SYBR Green I which are visible to the naked eye. Because RT-LAMP is low-cost and produces rapid results, it has the potential to be an excellent tool for CSFV surveillance in the field, especially in developing countries. 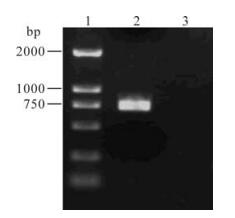 Ze LIU, Wei-dong LI, Ming-bo SUN, Lei MA, Zi-quan GUO, Shu-de JIANG, Guo-yang LIAO, Jing-si YANG and Chang-gui LI. Screening of a High Growth Influenza B Virus Strain in Vero Cells[J]. Virologica Sinica, 2010, 25(1): 65-70. doi: 10.1007/s12250-010-3066-8.
Due to the insufficient supply of embryonated chicken eggs, the preparation of large quantities of inactivated influenza vaccines will require an alternative virus culture system after the emergence or reemergence of a pandemic influenza virus. The Vero cell is one of the ideal options since it was used for producing many kinds of human vaccines. However, most of the influenza viruses can not grow well in Vero cells. To develop a new influenza vaccine with Vero cells as a substrate, the virus needs to adapt to this cell substrate to maintain high growth characteristics. By serial passages in Vero cells, the B/Yunnan/2/2005va (B) strain was successfully adapted to Vero cells, with the hemagglutination titer (HAT) of the virus reaching 1:512. The high growth characteristic of this strain is stable up to 21 passages. The strain was identified by hemagglutination inhibition (HAI) test and sequencing respectively; the HA1 gene sequence of the virus was cloned and analyzed. The screening and establishment of high growth B virus provides an important tool for influenza vaccine production in Vero cells.

Guo-zhen LIN, Fu-ying ZHENG, Ji-zhang ZHOU, Xiao-an CAO, Xiao-wei GONG, Guang-hua WANG and Chang-qing QIU. An Indirect ELISA of Classical Swine Fever Virus Based on Quadruple Antigenic Epitope Peptide Expressed in E.coli[J]. Virologica Sinica, 2010, 25(1): 71-76. doi: 10.1007/s12250-010-3086-4.
In this study, a synthesized quadruple antigenic epitope gene region of the classical swine fever virus (CSFV) E2 glycoprotein was expressed in E. coli to a obtain target protein. This target protein was used as a coating antigen to establish an indirect ELISA for specifically detecting anti-CSFV antibodies in serum samples from pigs. The P/N cut-off value of this assay was 1.92 by receiver operating characteristic curve (ROC) analysis based on 30 negative sera and 80 positive samples. The test gave 97.5% sensitivity and 96.7% specificity compared with the indirect hemagglutination (IHA) test. The inter-assay and intra-assay coefficients of variation (CVs) for 16 sera were both ≤6.8%. No cross-reactivity between the coating antigen and anti-bovine viral diarrhoea virus (BVDV) antibodies was observed.