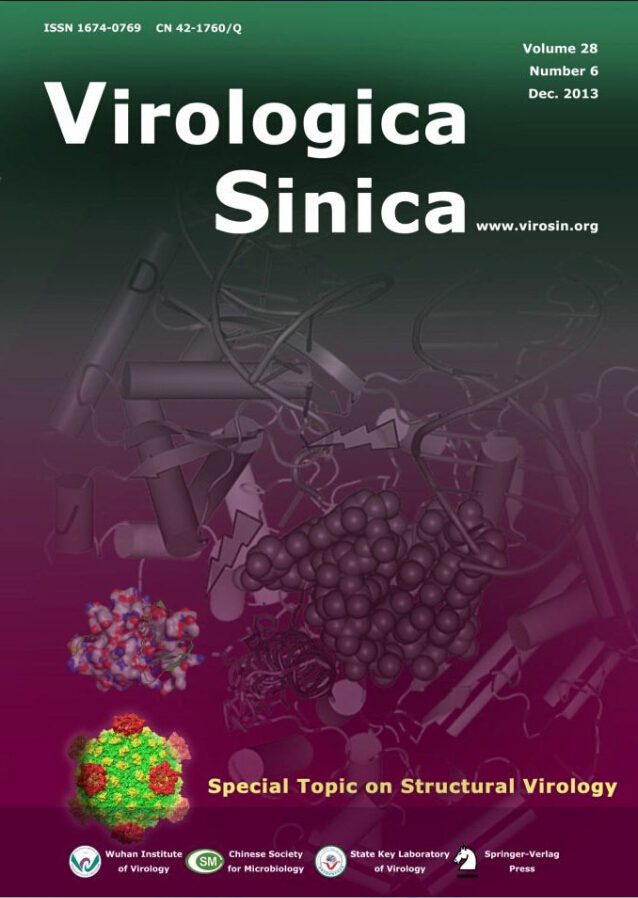 A special topic section on Structural Virology is included in this issue. The section contains three review articles, which cover the recent research advancement on the structures of reovirus particle, flavivirus NS2B-NS3 protease, and enterophage T7 RNA polymerase. The issue cover presents: i) Crystal structure of a late initiation complex of T7 RNA Polymerase; ii) Crystal structure of the NS2B-NS3 protease with a peptide-based inhibitor; iii) Cryo-EM structure of the turreted reovirus core. (Organizer of the special topic: Peng Gong, PhD. Wuhan Institute of Virology, Chinese Academy of Sciences.) 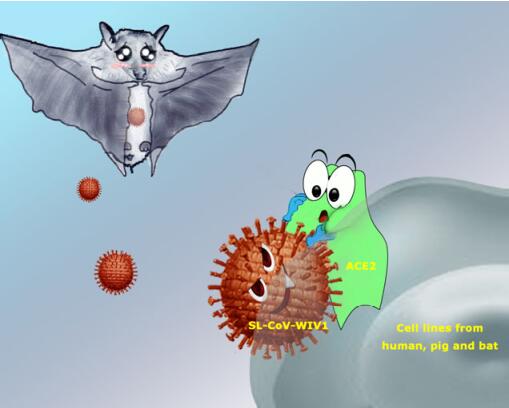 Bats as animal reservoirs for the SARS coronavirus: hypothesis proved after 10 years of virus hunting

Manli Wang and Zhihong Hu. Bats as animal reservoirs for the SARS coronavirus: hypothesis proved after 10 years of virus hunting[J]. Virologica Sinica, 2013, 28(6): 315-317. doi: 10.1007/s12250-013-3402-x.
Recently, the team led by Dr. Zhengli Shi from Wuhan Institute of Virology, Chinese Academy of Sciences, and Dr. Peter Daszak from Ecohealth Alliance identified SL-CoVs in Chinese horseshoe bats that were 95% identical to human SARS-CoV and were able to use human angiotensin-converting enzyme 2 (ACE2) receptor for docking and entry. Remarkably, they isolated the first known live bat SL-CoV that replicates in human and related cells. Their findings provide clear evidence that some SL-CoVs circulating in bats are capable of infecting and replicating in human (Ge X Y, et al., 2013).
Review 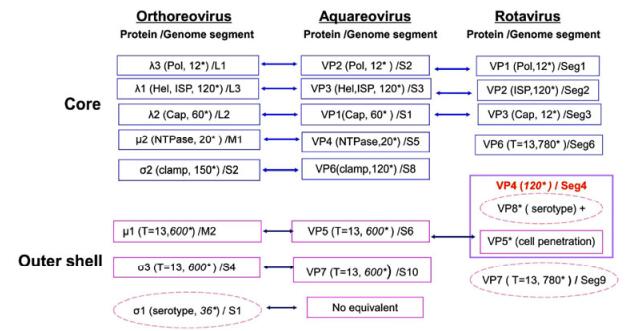 Xiaoming Li and Qin Fang. High-resolution 3D Structures Reveal the Biological Functions of Reoviruses[J]. Virologica Sinica, 2013, 28(6): 318-325. doi: 10.1007/s12250-013-3341-6.
Viruses in the family Reoviridae are non-enveloped particles comprising a segmented double-stranded RNA genome surrounded by a two-layered or multi-layered icosahedral protein capsid. These viruses are classified into two sub-families based on their particle structural organization. Recent studies have focused on high-resolution three-dimensional structures of reovirus particles by using cryo-electron microscopy (cryo-EM) to approach the resolutions seen in X-ray crystallographic structures. The results of cryo-EM image reconstructions allow tracing of most of the protein side chains, and thus permit integration of structural and functional information into a coherent mechanism for reovirus assembly and entry. 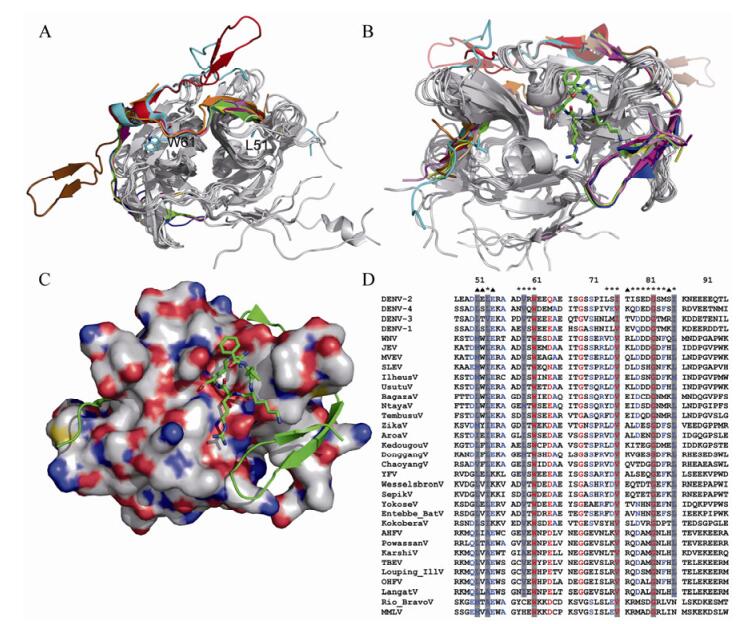 The Flavivirus Protease As a Target for Drug Discovery

Matthew Brecher, Jing Zhang and Hongmin Li. The Flavivirus Protease As a Target for Drug Discovery[J]. Virologica Sinica, 2013, 28(6): 326-336. doi: 10.1007/s12250-013-3390-x.
Many flaviviruses are significant human pathogens causing considerable disease burdens, including encephalitis and hemorrhagic fever, in the regions in which they are endemic. A paucity of treatments for flaviviral infections has driven interest in drug development targeting proteins essential to flavivirus replication, such as the viral protease. During viral replication, the flavivirus genome is translated as a single polyprotein precursor, which must be cleaved into individual proteins by a complex of the viral protease, NS3, and its cofactor, NS2B. Because this cleavage is an obligate step of the viral life-cycle, the flavivirus protease is an attractive target for antiviral drug development. In this review, we will survey recent drug development studies targeting the NS3 active site, as well as studies targeting an NS2B/NS3 interaction site determined from flavivirus protease crystal structures. 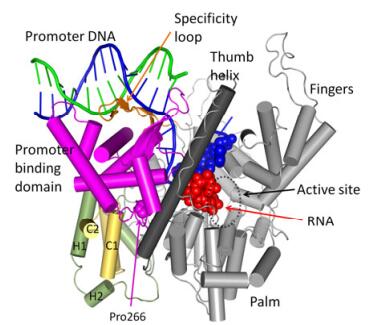 Karsten Theis. Snapshots of a Viral RNA Polymerase Switching Gears from Transcription Initiation to Elongation[J]. Virologica Sinica, 2013, 28(6): 337-344. doi: 10.1007/s12250-013-3397-3.
During transcription initiation, RNA polymerase binds tightly to the promoter DNA defining the start of transcription, transcribes comparatively slowly, and frequently releases short transcripts (3-8 nucleotides) in a process called abortive cycling. Transitioning to elongation, the second phase of transcription, the polymerase dissociates from the promoter while RNA synthesis continues. Elongation is characterized by higher rates of transcription and tight binding to the RNA transcript. The RNA polymerase from enterophage T7 (T7 RNAP) has been used as a model to understand the mechanism of transcription in general, and the transition from initiation to elongation specifically. This single-subunit enzyme undergoes dramatic conformational changes during this transition to support the changing requirements of nucleic acid interactions while continuously maintaining polymerase function. Crystal structures, available of multiple stages of the initiation complex and of the elongation complex, combined with biochemical and biophysical data, offer molecular detail of the transition. Some of the crystal structures contain a variant of T7 RNAP where proline 266 is substituted by leucine. This variant shows less abortive products and altered timing of transition, and is a valuable tool to study these processes. The structural transitions from early to late initiation are well understood and are consistent with solution data. The timing of events and the structural intermediates in the transition from late initiation to elongation are less well understood, but the available data allows one to formulate testable models of the transition to guide further research.
Research Article 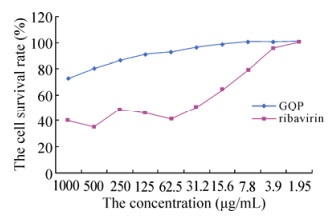 Antiviral Activity of GuiQi Polysaccharides against Enterovirus 71 in vitro

Xiuying Pu, Hengrui Wang, Yan Li, Wenbo Fan and Shuang Yu. Antiviral Activity of GuiQi Polysaccharides against Enterovirus 71 in vitro[J]. Virologica Sinica, 2013, 28(6): 352-359. doi: 10.1007/s12250-013-3376-8.
In this study, we have investigated the antiviral activity of GuiQi polysaccharides (GQP) upon enterovirus 71 (EV71) in vitro. An assay using methyl thiazolyl tetrazolium (MTT), and analyses of cytopathic effects (CPE) were used to examine the antiviral activity of GQP upon Vero cells infected with EV71. The results revealed that GQP at concentrations below 31.2 μg/mL exhibited significant antiviral effects upon EV71 when applied under three different experimental protocols. GQP was most strongly active in preventing the adsorption of EV71 to target cells and in this respect it was significantly more effective than ribavirin. In addition, it was clear that GQP could inhibit viral replication when added to cells 2 h after infection, but if added at the point of infection its effect was weak. GQP is considered to be less toxic than ribavirin, and may warrant further evaluation as a possible agent in the treatment of hand, foot and mouth disease (HFMD).

Limin Liao, Dianhai Hou, Huachao Huang, Manli Wang, Fei Deng, Hualin Wang, Zhihong Hu and Tao Zhang. Identification of the Epitopes of Monoclonal Antibodies against P74 of Helicoverpa armigera Nucleopolyhedrovirus[J]. Virologica Sinica, 2013, 28(6): 360-367. doi: 10.1007/s12250-013-3393-7.
P74 is a per os infectivity factor of baculovirus. Here, we report the production of three monoclonal antibodies (mAbs), denoted as 20D9, 20F9 and 21E1, raised against P74 of Helicoverpa armigera nucleopolyhedrovirus (HearNPV), and the identification of their recognition epitopes. The full-length P74, without the transmembrane domains at the C-terminus, was first divided into three segments (N, M and C, respectively), based on the proposed cleavage model for the protein, which were then expressed individually. Western blot analyses revealed specific cross-reactions with the N fragment, for both 20D9 and 21E1. Extensive truncation, followed by prokaryotic expression, of the P74 N fragment was then performed in order to screen for linear epitopes of P74. The recognition regions of 20D9 and 21E1 were revealed to be localized at R144-T153 and T199-C219, respectively. In addition, immunofluorescence microscopy indicated that 20D9 and 20F9 could recognize native P74 in HearNPV-infected cells. These findings will facilitate further investigations of the proteolytic processing of HearNPV P74, and of its involvement in virus-host interactions.
Letter 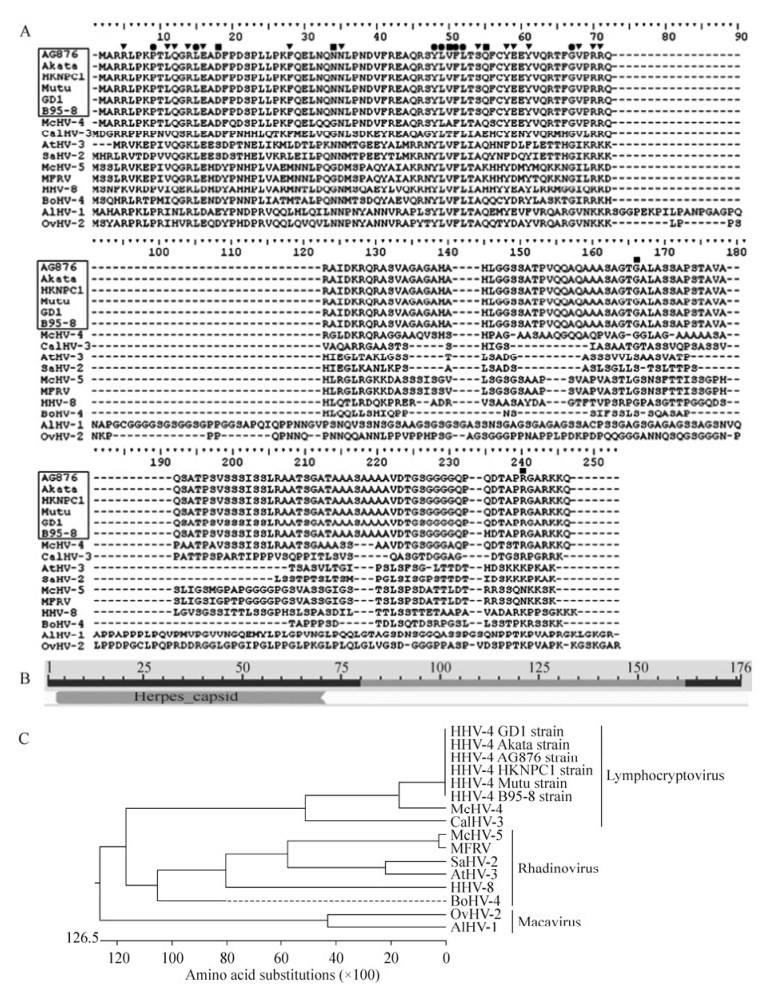 Retraction Note: Phylogenetic Analysis of the Non-structural (NS) Gene of Influenza A Viruses Isolated in Kazakhstan in 2002–2009

Acknowledgement to all reviewers for Virologica Sinica in 2013