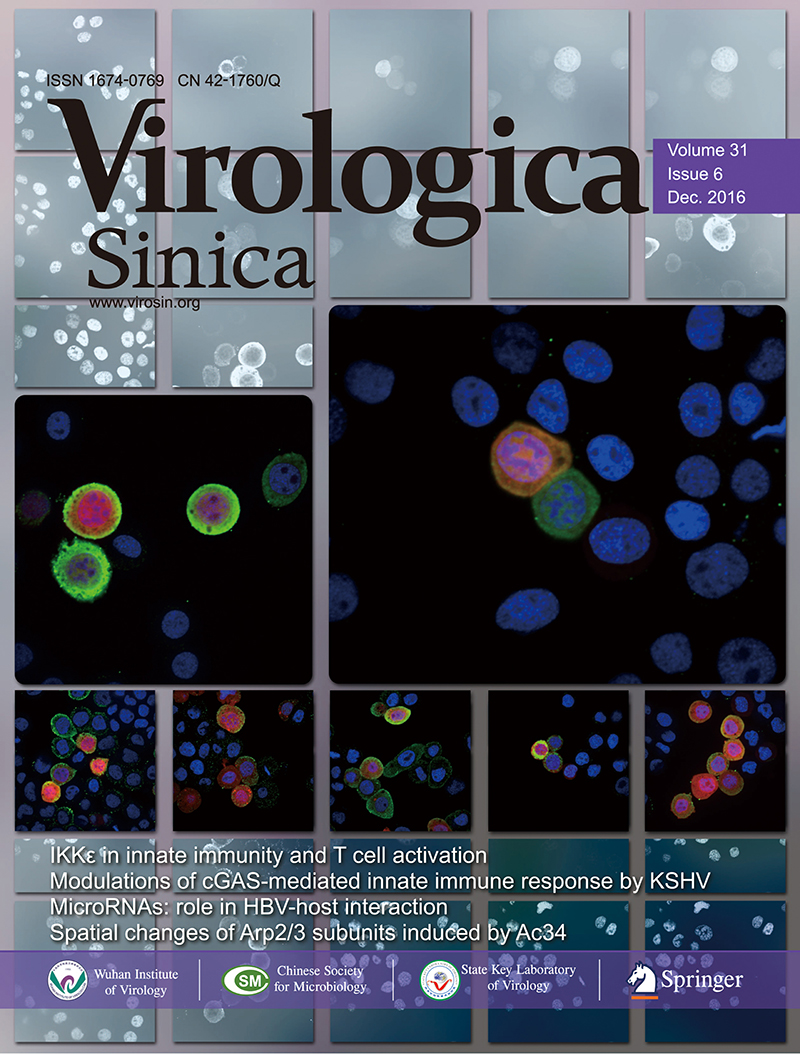 Viral pathogens frequently hijack the host actin polymerization machinery to facilitate their infection. Autographa californica multicapsid nucleopolyhedrovirus (AcMNPV) is one of the unique insect virus that inducing actin polymerization occurring in the nucleus, which requires relocation of cytoplasmic actin polymerization machinery, including actin-related protein 2/3 complex (Arp2/3), to the nucleus. Therefore, the alphabaculovirus-infection system could serve as a research model for investigating the nuclear import mechanism of Arp2/3. In this issue, Wang et al. investigated the spatial changes of Arp2/3 subunits induced by the viral replication-associated protein Ac34 in Sf9 cells. The cover shows the relocation of Arp2/3 subunits (P40, Arp2, P34, P21, and P20) in the presence of the viral late gene product Ac34. See page 472-479 for details. Junjie Zhang, Mao Tian, Zanxian Xia and Pinghui Feng. Roles of IκB kinase ε in the innate immune defense and beyond[J]. Virologica Sinica, 2016, 31(6): 457-465. doi: 10.1007/s12250-016-3898-y.
IκB kinase ε (IKKε) is a non-canonical IκB kinase that is extensively studied in the context of innate immune response. Recently, significant progress has been made in understanding the role of IKKεin interferon (IFN) signaling. In addition to its roles in innate immunity, recent studies also demonstrate that IKKε is a key regulator of the adaptive immune response. Specifically, IKKε functions as a negative feedback kinase to curtail CD8 T cell response, implying that it can be a potential therapeutic target to boost antiviral and antitumor T cell immunity. In this review, we highlight the roles of IKKε in regulating IFN signaling and T cell immunity, and discuss a few imminent questions that remain to be answered. 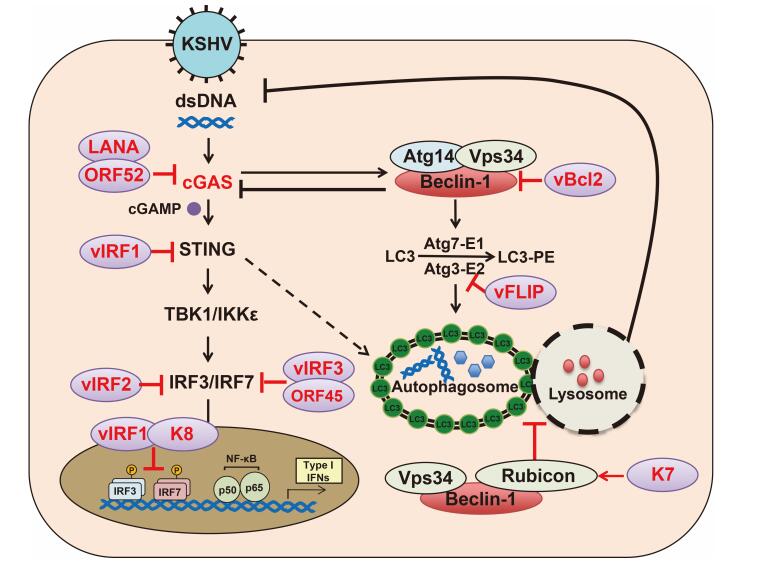 Wanyu Deng and Mengji Lu. The role of microRNAs in hepatocyte metabolism and hepatitis B virus replication[J]. Virologica Sinica, 2016, 31(6): 472-479. doi: 10.1007/s12250-016-3924-0.
Though efficient vaccines against hepatitis B virus (HBV) and antiviral therapies are available,chronic HBV infection is still a global health problem. The process of HBV infection and HBV life cycle are extensively studied in last decades, however, the mechanisms of HBV-induced alterations of host cell metabolisms and host factors involved in modulating of viral replication are not fully understood. Thus, it is an important issue to examine these specific HBV-host interactions for development of novel strategies for antiviral therapies. Recently, microRNAs (miRNAs), a class of post-transcriptional regulatory small RNA, seem to be the relevant fine tuning factors of various cellular activities and pathways, including cell growth, metabolism, and viral replication. In this review, we summarize the up to date knowledge concerning the virus-host interactions and emphasizing on the role of miRNAs in regulation of HBV replication and host cell metabolism.
Research Article

Jingfang Mu, Yongli Zhang, Yangyang Hu, Xue Hu, Yuan Zhou, Xinwen Chen and Yun Wang. The role of viral protein Ac34 in nuclear relocation of subunits of the actin-related protein 2/3 complex[J]. Virologica Sinica, 2016, 31(6): 480-489. doi: 10.1007/s12250-016-3912-4.
The actin nucleator actin-related protein complex (Arp2/3) is composed of seven subunits: Arp2,Arp3, p40/ARPC1 (P40), p34/ARPC2 (P34), p21/ARPC3 (P21), p20/ARPC4 (P20), and p16/ARPC5(P16). Arp2/3 plays crucial roles in a variety of cellular activities through regulation of actin polymerization. Autographa californica multiple nucleopolyhedrovirus (AcMNPV), one of the beststudied alphabaculoviruses, induces Arp2/3 nuclear relocation and mediates nuclear actin polymerization to assist in virus replication. We have demonstrated that Ac34, a viral late-gene product, induces translocation of the P40 subunit of Arp2/3 to the nucleus during AcMNPV infection. However, it remains unknown whether Ac34 could relocate other Arp2/3 subunits to the nucleus. In this study, the effects of the viral protein Ac34 on the distribution of these subunits were studied by an immunofluorescence assay. Arp2, P34, P21, and P20 cloned from Spodoptera frugiperda (Sf9) cells showed mainly cytoplasmic localization and were relocated to the nucleus in the presence of Ac34. In addition, Arp3 was localized in the cytoplasm in both the presence and absence of Ac34, and P16 showed whole-cell localization. In contrast to Sf9 cells, all subunits of mammalian Arp2/3 showed no nuclear relocation in the presence of Ac34. Co-immunoprecipitation analysis of the interaction between Ac34 and Arp2/3 subunits revealed that Ac34 bound to P40, P34, and P20 of Sf9 cells. However, none of the subunits of mammalian Arp2/3 interacted with Ac34, indicating that protein-protein interaction is essential for Ac34 to relocate Arp2/3 subunits to the nucleus. Zijiao Zou, Jinliang Liu, Zhiying Wang, Fei Deng, Hualin Wang, Zhihong Hu, Manli Wang and Tao Zhang. Characterization of two monoclonal antibodies, 38F10 and 44D11, against the major envelope fusion protein of Helicoverpa armigera nucleopolyhedrovirus[J]. Virologica Sinica, 2016, 31(6): 490-499. doi: 10.1007/s12250-016-3831-4.
The envelope fusion protein F of baculoviruses is a class I viral fusion protein which play a significant role during virus entry into insect cells. F is initially synthesized as a precursor (F0) and then cleaved into a disulfide-linked F1 and F2 subunits during the process of protein maturation and secretion. To facilitate further investigation into the structure and function of F protein during virus infection, monoclonal antibodies (mAbs) against the F2 subunit of Helicoverpa armigera nucleopolyhedrovirus (HearNPV) (HaF) were generated. Two kinds of mAbs were obtained according to their different recognition epitopes: one kind of mAbs, as represented by 38F10, recognizes amino acid (aa) 85 to 123 of F2 and the other kind, represented by 44D11, recognizes aa 148 to 173 of F2. Western blot and immunofluorescence assay confirmed that both of the mAbs recognized the F protein expressed in HearNPV infected cells, however, only 44D11 could neutralize HearNPV infection. The results further showed that 44D11 may not interact with a receptor binding epitope, rather it was demonstrated to inhibit syncytium formation in cells expressing the HaF protein. The results imply that the monoclonal antibody 44D11 recognizes a region within HaF2 that may be involved in the F-mediated membrane fusion process. 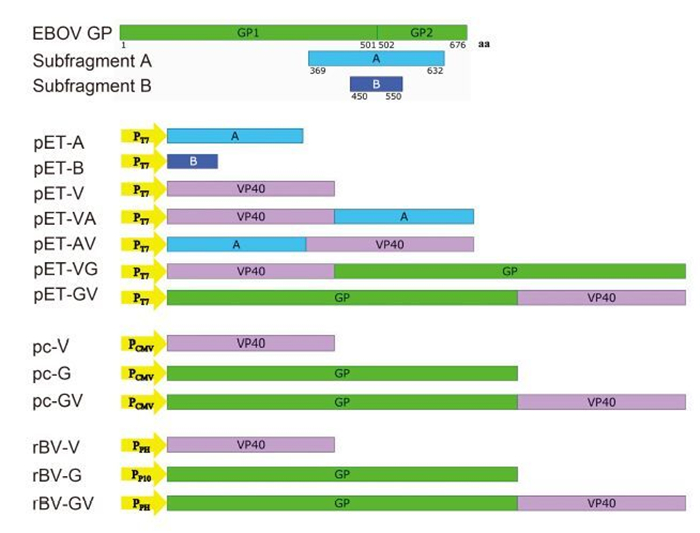 Junjie Zai, Yinhua Yi, Han Xia, Bo Zhang and Zhiming Yuan. A new strategy for full-length Ebola virus glycoprotein expression in E.coli[J]. Virologica Sinica, 2016, 31(6): 500-508. doi: 10.1007/s12250-016-3845-y.
Ebola virus (EBOV) causes severe hemorrhagic fever in humans and non-human primates with high rates of fatality. Glycoprotein (GP) is the only envelope protein of EBOV, which may play a critical role in virus attachment and entry as well as stimulating host protective immune responses. However, the lack of expression of full-length GP in Escherichia coli hinders the further study of its function in viral pathogenesis. In this study, the vp40 gene was fused to the full-length gp gene and cloned into a prokaryotic expression vector. We showed that the VP40-GP and GP-VP40 fusion proteins could be expressed in E. coli at 16℃. In addition, it was shown that the position of vp40 in the fusion proteins affected the yields of the fusion proteins, with a higher level of production of the fusion protein when vp40 was upstream of gp compared to when it was downstream. The results provide a strategy for the expression of a large quantity of EBOV full-length GP, which is of importance for further analyzing the relationship between the structure and function of GP and developing an antibody for the treatment of EBOV infection.
Letter 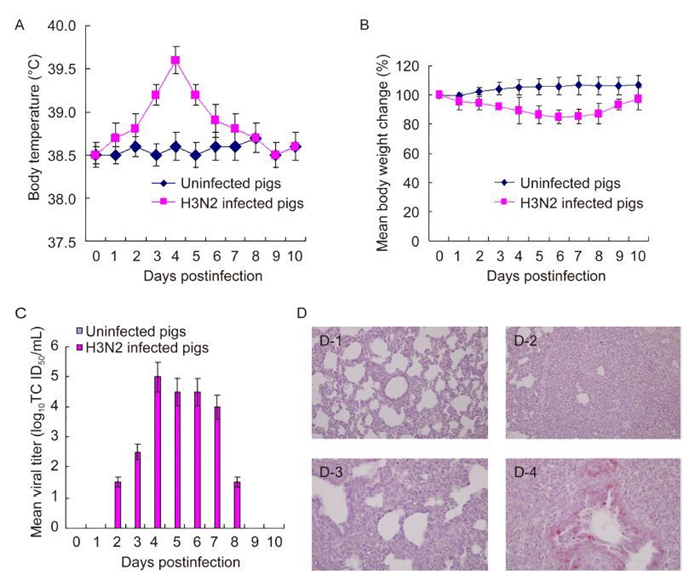 Tran Bac Le, In Hong Lee, Byung Jun Kim, Hyun Soo Kim and Sang Heui Seo. Detection and pathogenesis of a novel swine H3N2 influenza virus containing three genes from the 2009 pandemic H1N1 influenza viruses in Korea in 2015[J]. Virologica Sinica, 2016, 31(6): 513-516. doi: 10.1007/s12250-016-3848-8.
On July 2, 2015, four pigs with severe respiratory distress and high fever (>40.0 ℃) at a farm in Jeonpook province in the Southern region of South Korea were euthanized, and their lung tissues were collected and homogenized in PBS. The homogenized samples were inoculated into the wells of 6-well plates containing MadinDarby Canine Kidney (MDCK) cells in MEM with 1 μg/mL trypsin. One influenza A virus, A/Swine/Korea/S2001/2015 (H3N2), was isolated from one sample. 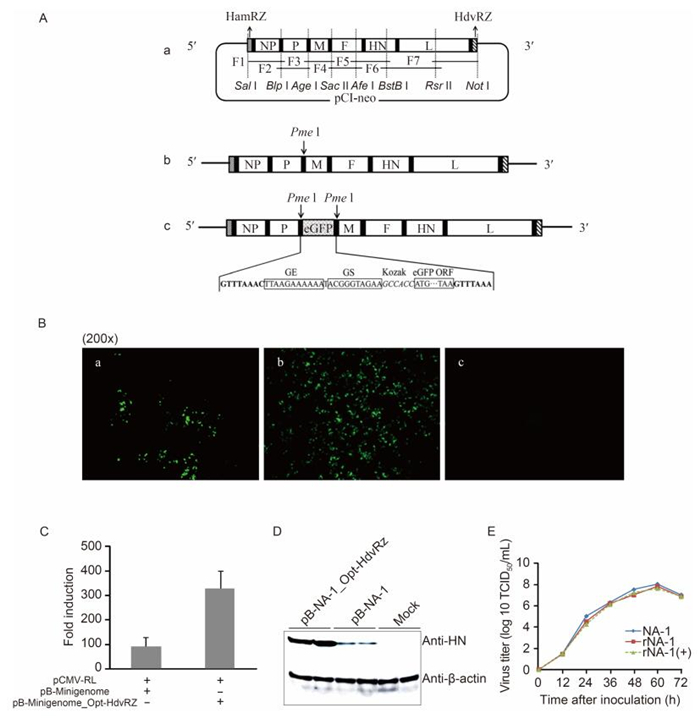 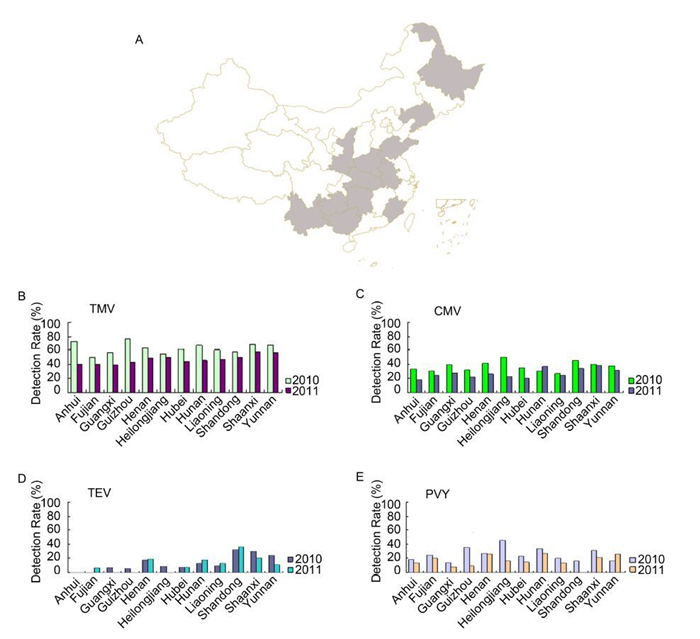 Distribution and molecular variability of four tobacco viruses in China