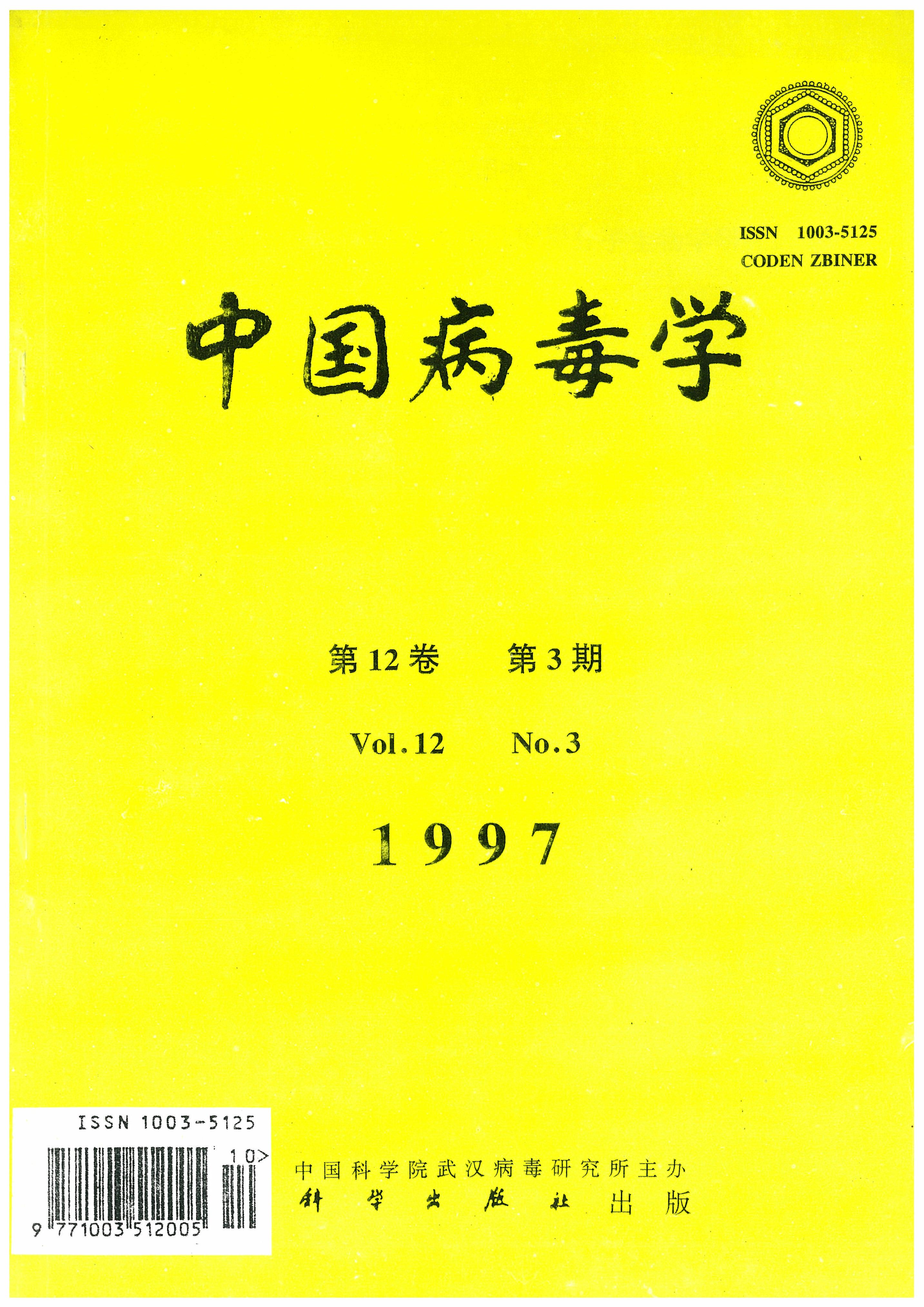 Advances on molecular biology of Closterovirus

Abstract [PDF 108 KB] [Cited by]
A method of reverse - transcription polymerase chain reaction(RT - PCR) was established for detection of respiratory syncytical virus (RSV) RNA genome, The primers were designed based on the nucleotide sequence of RSV N gene. The results showed that the primers can't amplify the genomes of influenza virus and parainfluenza virus, but it can detect RSV genome in naSopharyngeal aspirate samples in infants and young children. This method is better than virus isolation. Its specificity is similar to immunofluorescence assay. The results indicated that the RTPCR for RSV RNA is specific, rapid and sensitive. It is suitable for clinical diagnosis of RSV infection.

Abstract [PDF 145 KB] [Cited by]
Retroviral vector expresing antisense RNA complementary to HBV pre C/C (ANTI - C) was used to transduce human hepatoblastoma cell 2. 2. 15, which was transfected with HBV DNA and can express HBV markers. The results showed that the inhibitory effects of antisense gene transfer mediated by retroviral vector ANTI - C on the expression of HBV antigens appeared as early as on the 3rd day after transduction, reached peak level on the fifth day, and persisted at least for 11 days. The inhibitory rates of HBsAg and HBeAg in 2. 2. 15 cells by ANTI - C were 27. 0 %and 59. 5 % on the fifth day after transduction, and in comparison to blank or sense - expressing vectors, the inhibitory effects of ANTI - C were highly significant (P＜0.01 ). HBV DNA in the supernatants of 2. 2. 15 cells transduced with ANTl - C in comparison to blank or SENSE - C was also reduced on the fifth day after transduction as detected by DNA dot blot assays, but the viability of transduced 2. 2. 15 cells was not affected as indicated by MTT assay

Abstract [PDF 145 KB] [Cited by]
The sequence of entire hepatitis B virus (HBV) genome from one Chinese patient with fulminant hepatitis and also from a hepatitis B e antigen (HBeAg) positive carrier from the same region was determined using direct sequencing of amplified viral DNA. The fulminant case was infected with the precore stop codon variant. Compared the sequence from this fulminant case with sequences from fulminant isolate previously reported and also from HBeAg positive carrier from the same region, the results showed significant genetic variations throughout the HBV genome in the precore stop variant sequence and less in the wild type. The increase of variability in the core region in fulminant cases in the Far East origin was found: codon 84 ~97 showing high rates of changes. A clustered mutations previously described in the X region (126 ~ 132) in sequences reported in Japanese patients and encompassing the enhancer Ⅱ - core promoter region were not found in the isolate. This study firstly characterized a Chinese fulminant iso

Abstract [PDF 136 KB] [Cited by]
The cDNA sequence of 5' non - coding region (5'NCR) of GBV - C/HGV strain from China was determined. According to the previously reported sequences of HGV, two pairs of primers specific for HGV from relatively conserved regha in the 5' NCR was designed- GBV - C/HGV RNA derived from the plasma of a intravenous drug user in Kunming district (Yunnan Province,China) was extracted using the heat denaturization method and was subsequently converted to cD-NA by reverse transcription before nested RCR. The amplified product with 238 bp was purified and then directly sequenced by dideoxy nucleotide chain termination method. A Comarison of the nucleotlde sequence of GBV - C/HGV from China with that of several previously reported isolates from abroad showed the homology to be 86. 36 % ~ 90. 91 % and a divergent region. The results demonstrated that the amplified fragment was derived from the genome of GBV - C/HGV. The sequence of the GBV - C/HGV 5' NCR determined here was useful for the selection of primers and for the

Abstract [PDF 160 KB] [Cited by]
The effects of HHV - 6 infection in vitro on cytokines such as IL - 6, IL - 8 synthesis and NK activity of human peripherial blood mononuclear cels (PBMC) were studied by comparing CN8 strain with GS strain. Interleukin - 8 (IL - 8) could be detected as eary as 24 h, plateaued at 48h or so by ELISA. There were significant differences of IL - 8 leve between the control groop and HHV -6 GS or CN8 strain infection groups- Comaring with uninfected cells, synthesis of IL - 6 in infected cells was inhibited slightly determined by biological activity assay and ELISA. The inhibition activity of GS strain was significantly higher than that of CN8 strain, By LDH releasing assay, activity of NK was augumnted 24 h after infection, then graduanlly decreased. The NK activity stimulated by GS strain was lower than that of CN8 strain- All these results indicated that HHV - 6 could disturb function of human immunoloical Cells and immunity inhibitbo activity of GS strain (A variant) was more remarkable than tha of CN8 strain

Abstract [PDF 110 KB] [Cited by]
The cDNA (651nt - 941nt) fragment of an isolate of hepatitis delta virus with 289 bp was determined by cloning and Sequencing, from a HBsAg carrier positive both for anti - HDAg and HDV RNA from China, Sichuan Province, using reverse transcription polymerase chain reaction.It contains the region of HDV ribozyme and its self - cleavage site. Comparing this Sichuan isolate with other known HDV isolates from Henan, US - 1, Japan, Peru and Taiwan, the result showed that the homology of nucbotides is 97. 2 %, 93 %, 94 %, 79 %, 96 %, respectively.

Abstract [PDF 118 KB] [Cited by]
Point mutation was produced in the cellular receptor binding region of hepatitis A virus VP1 based on PCR directed mutagenesis. The results showed that the replication kinetics were changed when 1143, 1187, 1202 and 1225 amino acid were mutated respectively. HAV replicatioll quantity decreased at a different range compared with prototype HAV strain. The results indicated that these amino acid may be involved in the binding of cellular receptor, The amino acid substitution may affect the attachment and the uncoating process of HAV to permissive cell,therefore the virus infection decreased.

Abstract [PDF 117 KB] [Cited by]
Affinity- capture PCR method was adapted to study the interaction between hepatitis C virus (HCV) and human IgG, and demonstrated that HCV bound IgG and Fc fragment but not Fab fragment, The binding could be inhibited cometitively by Fc fragment but not Fab fragment. Meanwhile, pre -mccubation with HCV - RNA negative plapa did not inhibit subsequent binding of HCV to Fc fragment, further confirmed that this binding is just between HCV particles and Fc fragment, The results demonstrated an interaction betwee HCV and IgG, and gave a new explanaion by which HCV may trigger immune complex disease and the chronic trend of hepatitis C.

Abstract [PDF 167 KB] [Cited by]
The purpose of this study was to eveluate the effective of recomination antigen of HCV NS5 region in detection of hepatitis C infection and in developing the third generation HCV diagnostic kit in China. All the serum samples were obtained in Hebei Province. Sera of PT - HC patients were collected in pre - transfusion and at 1, 3, 6, 12, 36 and 72 months after transfusion, Sera from patients with C - HC were collected in 8th year and 11th year after folowed - up. EIA method was developed using recombination antigen of HCV NS5 region. HCV RNA was determined with RT- PCR using 5' NTR primer. The anti - NS5 was detected in different populations. The positive rates of anti - NS5 in PT - HC patients, followed - up for 3 and 6 years, were 70. 5 % and 80. 1 %, respectively; C - HC patients followed - up for 8 and 11 years were 50. 8 %and 82. 4 %, respectively. No anti - NS5 in 291 blood donors was detected, and in the normal populations the positive rate was 1. 7%.

Abstract [PDF 181 KB] [Cited by]
Six Tobacco - TMV isolates which cause different symptom expressions on tobacco in different tobcco production areas in Guangdog Province were selected from 138 samples and were studied. The symptom expression of the 6 Tobacco - TMV isoates on 6 differenial host plants and 6 tobacco varieties were about the same, although some minor differences might exist. The morphology of the virus particles of the 6 isoates, their thermal inactivation points, electrophoretic mobility and ultraviolet light absorption were found to be about the same. By agar donble - diffusion reaction and indirect ELISA, the 6 isolates were found to have very close serological relationship. The amino acid compositions of the coat proteins of the 6 isolates were found to be very siwhar each other and similar to the Vulgare strain, althonh minor dihaences ekisted in the amount of certain amino residues. According to the experimental results, it was conluded that the 6 isoates all belong to the common strain of TMV.

Abstract [PDF 286 KB] [Cited by]
The coat prolein (CP) gene of a Chinese isolate of rice stripe virus (RSV) was synthesized,cloned and sequenced. Embryogenic suspension cultures were initialed from calli which derived from Indiea rice mature embryo. For bombardment of cell suspension culture, tungsten particles of diameter of 1.09 μm were coated with DNA of the expression vector pRoK Ⅱ harbouring CP coding sequence downstream CaMV 35S promoter. Bombarded cultures were selected by growing in the medium containing G418 (40mg/mL).Ten plantlets regenerated from G418 resistant calli were analysed by Southem blot Date of receiption: 1996 -09-13, date of correction: 1997-02- 26 This work was supported by grant RF 95001 # 309 from the Rockfeller FoundationTo whom correspondence should be addressedlLsing 32P - dtryP 1abelled CP gene as probe. The genomic DNAs extrac1cd frotn resistant as well as th`>control plants were digested with EcoRI and BamHI. Samples from two plants showed tw0 hyl,ridlzat1onbands with the sizes 0f 0. 6 kb and 0. 7 kb correspo

Abstract [PDF 263 KB] [Cited by]
The distribution of baculovirus in stotnach and other 10 organs of Peaseus oricntalis naturally diseased and artificially infected was reported. The result showd that a larg number of virion was detected in circulatory blood cells, as well as in connective tissue cells and opidends of stomach, subcutaneous, gill and intestine, a certain number in lytnphoid organ cell, Cardiac muscle cells, hepatapancreatic cells, and a few in abddominal nerve, muscle cells, The virion invaded shrimps to a rather great extent, infected all main organs of body and first attacked loose connective tissue cells, epithelial cells and blood cells, then go to cardiac muscle cells and neurogliocytes.

Abstract [PDF 89 KB] [Cited by]
MbNPV ,SeNPV and SINPV are important biological agents for three noctuid insects Mamestra brassicae, Spodoptera exigua and Spodoptera litura, respectively. The genomic DNAs from these NPVs were analysed by restriction and dot hybridization. The results showed that they have different restriction maps and low homology among MbNPV, SeNPV and SlNPV. The polyhedrin gene of MbNPV was localized under non - stringency by using 32P - labelled Buzura suppressaria NPV polyhedrin gene as a probe.

Abstract [PDF 90 KB] [Cited by]
An indirect ELISA by using monoclonal antibody (McAb) against hutnan IgM (μ chain)as the antibody labeled with horseradish peroxidase (second antibody) is used in detecion Rubela virus - specific IgM for early diagnosis of Rubella virus infection. Through the detection and verifition of a large number of sera from normal population, the population closely contacted with Rubella virus and IgM - positive sera samples of Measles virus, cycoegaforirm and Toxplasma Gondii, it is indicated that this method is specific, seusiuive, simple, rapid and no cross - reaction with the positive sera of the pathogens menticned above, It can be used for early diagnosis of Rubella virus infection and epidemiological survey.