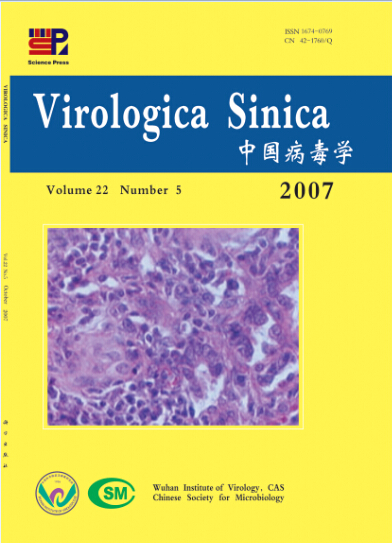 HTML Full Text [PDF 271 KB] [Cited by]
Fu-ying ZHENG, Guo-zhen LIN, Chang-qing QIU, Kui-zhang YUAN and Jun-ying SONG. Expression and Antigenic Characterization of the Epitope-G1 of the Bovine Ephemeral Fever Virus Glycoprotein in Pichia pastoris*[J]. Virologica Sinica, 2007, 22(5): 347-352.
The epitope-G1 gene of Bovine ephemeral fever virus (BEFV) glycoprotein was synthesised by PCR and cloned into expression vector pPIC9K to construct recombinant plasmid pPIC9K-G1. Then the pPIC9K-G1 was linearized and transformed into Pichia pastoris GS115. The recombinant P. pastoris strains were selected by a G418 transformation screen and confirmed by PCR. After being induced with methanol, an expressed protein with 26 kDa molecular weight was obtained, which was much bigger than the predicted size (15.54 kDa). Deglycosylation analysis indicated the recombinant G1 was glycosylated. Western blot and ELISA tests, as well as rabbit immunization and specificity experiments indicated that the target protein had both higher reaction activity and higher immunocompetence and specificity. The recombinant G1 protein could be used as a coating antigen to develop an ELISA kit for bovine ephemeral fever diagnosis.

HTML Full Text [Cited by]
Guang-qing LIU, Fei WANG, Zheng NI, Tao YUN, Bin YU, Jiong-gang HUANG and Jian-Ping CHEN. Complete Genomic Sequence of a Chinese Isolate of Duck Hepatitis Virus*[J]. Virologica Sinica, 2007, 22(5): 353-359.
The complete genomic sequence of Duck hepatitis virus 1 (DHV-1) ZJ-V isolate was sequenced and determined to be 7 691 nucleotides (nt) in length with a 5′-terminal un-translated region (UTR) of 626 nt and a 3′-terminal UTR of 315 nt (not including the poly(A) tail). One large open reading frame (ORF) was found within the genome (nt 627 to 7 373) coding for a polypeptide of 2 249 amino acids. Our data also showed that the poly (A) tail of DHV-1 has at least 22 A's. Sequence comparison revealed significant homology (from 91.9% to 95.7%) between the protein sequences of the ZJ-V isolate and those of 21 reference isolates. Although DHV-1 has been classified as an unassigned virus in the Picornaviridae family, its genome showed some unique characteristics. DHV-1 contains 3 copies of the 2A gene and only 1 copy of the 3B gene, and its 3′-NCR is longer than those of other picornaviruses. Phylogenetic analysis to do sequence homology based on the VP1 protein sequences showed that the ZJ-V isolate shares high sequence homology with the reported DHV-1 isolates (from 92.9% to 99.2%), indicating that DHV-1 is genetically stable.

HTML Full Text [PDF 593 KB] [Cited by]
Dong XI, Zhi-Mo WANG, Sui GAO, Chuan-Long ZHU, Jian-Wen GUO, Xiao-Ping LUO and Qin Ning. Construction of shRNA of Fulminant Hepatitis Related Gene mfgl2 and Investigation of Its Biological Effects in vitro*[J]. Virologica Sinica, 2007, 22(5): 366-373.
This study was designed to explore the RNA interference technique in inhibition of the expression of the mouse fibrinogen like protein 2 (mfgl2), which has been reported to be involved in the development a variety of diseases including fulminant viral hepatitis. A plasmid named p-mfgl2shRNA, complementary to the sequence of mfgl2 was constructed, while another short hairpin RNA (shRNA) which was a mutated form of the mfgl2shRNA sequences was used as a control. A plasmid named pEGFP-mfgl2 expressing the mfgl2-EGFP fusion protein was also constructed for the screening of the effect of p-mfgl2shRNA on mfgl2 expression. By cotransfection of p-mfgl2shRNA and pEGFP-mfgl2 or pcDNA3.1-mfgl2 expression construct into CHO cells or HeLa cells, the inhibition of mfgl2 expression by mfgl2shRNA was analyzed by direct observation through fluorescent microscopy, FACS, RT-PCR and immunohistochemistry staining. The experiments showed the significant inhibitory effect of p-mfgl2shRNA on mfgl2 expression at 48h post-transfection in both CHO and Hela cell lines with the inhibitory efficiency as high as 80.1%. The study demonstrated that the construct of p-mfgl2shRNA successfully interfered with the mfgl2 expression in vitro.

HTML Full Text [PDF 314 KB] [Cited by]
Yan-zi CHANG, Yan-chang LEI, Wen WU, Shan-shan CHEN, Han-ju HUANG, Dong-liang YANG and Meng-ji LU. Effect of Hepatitis C Virus Core Protein on Interferon-Induced Antiviral Genes Expression and Its Mechanisms[J]. Virologica Sinica, 2007, 22(5): 374-379.
Emerging data indicated that HCV subverts the antiviral activity of interferon (IFN); however, whether HCV core protein contributes to the process remains controversial. In the present study, we examined the effect of HCV core protein on interferon-induced antiviral gene expression and whether the effect is involved in the activation and negative regulation of the Jak/STAT signaling pathway. Our results showed that, following treatment with IFN-α，the transcription of PKR, MxA and 2’-5’OAS were down-regulated in HepG2 cells expressing the core protein. In the presence of HCV core protein, ISRE-dependent luciferase activity also decreased. Further study indicated that the core protein could inhibit the tyrosine phosphorylation of STAT1, whereas the level of STAT1 expression was unchanged. Accordingly, SOCS3, the negative regulator of the Jak/STAT pathway, was induced by HCV core protein. These results suggests that HCV core protein may interfere with the expression of some interferon-induced antiviral genes by inhibiting STAT1 phosphorylation and induction of SOCS3.

HTML Full Text [PDF 284 KB] [Cited by]
Cong ZHANG, Jun-fa YUAN and Zheng-li SHI. Molecular Epidemiological Investigation of Infectious Hypodermal and Hematopoietic Necrosis Virus and Taura Syndrome Virus in Penaeus Vannamei Cultured in China*[J]. Virologica Sinica, 2007, 22(5): 380-388.
The Infectious hypodermal and hematopoietic necrosis virus (IHHNV) and Taura syndrome virus (TSV) are two important shrimp viruses in cultured shrimp in America. These two viruses were transmitted to China at the beginning of the 21st century. In this study, 214 shrimp samples of Penaeus vannamei were collected from seven different areas of China and tested by PCR for IHHNV and TSV infection. The results showed that there were a high prevalence of IHHNV (65.42%) and low prevalence of TSV (3.27%) in the tested samples. Several samples were found to be co-infected with these two viruses. A 3 kb fragment of 7 positive IHHNV samples and a structure protein region (ORF2) of three TSV positive samples were amplified and sequenced. The sequence comparison indicated that both IHHNV and TSV sequenced in China have a low genetic variations compared with the prototype IHHNV and TSV from Hawaii. Phylogenetic analysis showed that TSV isolates were clustered into two groups, Asia and America group, which was genetically correlated to geographic distribution

HTML Full Text [PDF 220 KB] [Cited by]
Jian-hua SONG, Chang-yong LIANG and Xin-wen CHEN. Baculovirus-mediated Expression of p35 Confers Resistance to Apoptosis in Human Embryo Kidney 293 cells*[J]. Virologica Sinica, 2007, 22(5): 389-396.
Baculovirus has many advantages as vectors for gene transfer. We demonstrated that recombinant baculovirus vectors expressing p35 (Ac-CMV-p35) and eGFP (Ac-CMV-GFP) could be transduced into human kidney 293 cells efficiently. The level of transgene expression was viral dose dependent and high-level expression of the target gene could be achieved under the heterogonous promoter. MTT assay suggested that both Ac-CMV-p35 and Ac-CMV-GFP did not have cytotoxic effect on human embryo kidney 293 cells. Cell growth curve showed the Ac-CMV-p35 and Ac- CMV-GFP transduced and non-transduced cells had similar proliferation rate, so baculovirus-mediated p35 expression had no adverse effect on cell proliferation. In addition, baculovirus-mediated p35 gene expression protected human embryo kidney 293 cells against apoptosis induced by various apoptosis inducers such as Actinomycin D, UV or serum-free media. These results suggested that the baculovirus vector mediated p35 gene expression was functional and it could be widely used in molecular research and even gene therapy.

HTML Full Text [PDF 175 KB] [Cited by]
Wei-feng SHI, Zhong ZHANG, Lei PENG, Yan-zhou ZHANG, Bin LIU and Chao-dong ZHU. Proteotyping: A New Approach Studying Influenza Virus Evolution at the Protein Level*[J]. Virologica Sinica, 2007, 22(5): 405-411.
Phylogenetic methods have been widely used to detect the evolution of influenza viruses. However, previous phylogenetic studies of influenza viruses do not make full use of the genetic information at the protein level and therefore cannot distinguish the subtle differences among viral genes. Proteotyping is a new approach to study influenza virus evolution. It aimed at mining the potential genetic information of the viral gene at the protein level by visualizing unique amino acid signatures (proteotypes). Neuraminidase gene fragments of some H5N1 avian influenza viruses were used as an example to illustrate how the proteotyping method worked. Bayesian analysis confirmed that the NA gene tree was mainly divided into three lineages. The NA proteotype analysis further suggested there might be multiple proteotypes within these three lineages and even within single genotypes. At the same time, some proteotypes might even involve more than one genotype. In particular, it also discovered some amino acids of viruses of some genotypes might co-reassort. All these results proved this approach could provide additional information in contrast to results from standard phylogenetic tree analysis.