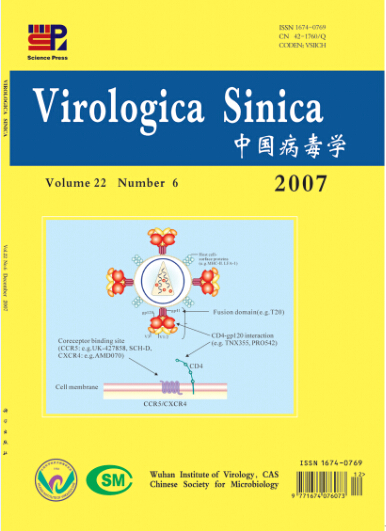 Strategy for AIDS Prevention and Treatment

HTML Full Text [PDF 128 KB] [Cited by]
Yi ZENG. Strategy for AIDS Prevention and Treatment[J]. Virologica Sinica, 2007, 22(6): 419-420.
HIV/AIDS has been circulating in China for over 25 year. While making progress and achievements on HIV/AIDS prevention, there still are great challenge and difficulties such as HIV epidemic controlling and vaccine research.

HTML Full Text [PDF 150 KB] [Cited by]
Yi-ming SHAO. AIDS Research and Its Role in China's AIDS Prevention and Control Policies[J]. Virologica Sinica, 2007, 22(6): 421-423.
By the end of 2005, the estimated number of HIV infected people in China was 650,000. The seriousness of the epidemic calls for effective control measures to tackle the problems in order to avoid the tragedy in Africa from happening in China. “Prevention First” is the cornerstone of the country’s health policy. On 2003 World AIDS Day, Premier Jiabao Wen announced a new national AIDS control policy, “Four Frees and One Care”. This policy clearly shows that the Chinese government has once again taken full responsibility to solve public health problems and has profound impact far beyond the AIDS field. In early 2006, the central government put scientific and technology innovation as a national priority and set the target to build an innovative China by year 2020. Since then, the government has been increasing investment in science and technology with major emphasis on both infectious diseases control and new drug research and development. For the first time, development of 100 new drugs and control of major infectious diseases (AIDS, HBV, TB and other emerging infectious diseases) have been selected as national key scientific projects. China’s best minds in related fields will be pooled to work together in order to remove the technical barriers blocking efficient control of the major infectious disease in China. Knowledge on molecular epidemiology, immunology, pathogenesis, HAART, as well as HIVDR strains will certainly provide urgently needed scientific information for China’s AIDS control program. Only evidence-based strategy from good research will provide long-term effective control of AIDS.

HIV/AIDS in Asia: The Shape of Epidemics and Their Molecular Epidemiology

HTML Full Text [PDF 514 KB] [Cited by]
Xiao-Jie Li, Rie Uenishi, Saiki Hase, Huanan Liao, Tee Kok Keng, Shigeru Kusagawa and Yutaka Takebe. HIV/AIDS in Asia: The Shape of Epidemics and Their Molecular Epidemiology[J]. Virologica Sinica, 2007, 22(6): 424-433.
The Asia-Pacific region is a home to 60% of the population in the world and to approximately one quarter of people with HIV/AIDS. Close to a million of people has been infected and a half million people died of AIDS annually in Asia, becoming the second largest epicenter of global AIDS epidemic. Molecular epidemiology has been useful tool to track a course of HIV spread. In-depth knowledge from the studies on molecular epidemiology elucidates the dynamics of HIV spread and the interrelationship of epidemics in the different regions in Asia.

HTML Full Text [PDF 180 KB] [Cited by]
Yan JIANG. Development and Challenge of HIV/AIDS Testing Laboratory Network and Quality Assurance System in China[J]. Virologica Sinica, 2007, 22(6): 434-442.
This paper describes the development and challenge of HIV/AIDS testing laboratory network and quality assurance system in China. At present, the HIV/AIDS testing laboratories includes three classes, the National AIDS Reference Laboratory, HIV/AIDS confirmatory laboratories and HIV/AIDS screening laboratories. All of them are accredited by the health authorities, and each class of laboratories take charge of their function strictly according to the “National Management of HIV/AIDS Detection (2006)”. A complete quality assurance and quality control system for HIV/AIDS testing has been developed, which includes technical training, strict laboratory monitoring and approval, examination or proficiency testing on HIV/AIDS detection, and quality evaluation and supervision of HIV/AIDS diagnostic kits. Besides conduct the routine anti-HIV antibody test, more and more laboratories began to conduct other tests, such as CD4+ T lymphocyte cell counting, HIV viral load, HIV DNA PCR, genotyping, drug resistance, and HIV-1 recent infection test. The primary challenges faced by the HIV/AIDS testing laboratory network are in the areas of laboratory management and quality control. For example, the provincial PT program is inefficient, the internal quality control is conducted perfunctorily, personnel training can not met the needs of the workplace, which need to be improved.

HIV and HCV: from Co-infection to Epidemiology, Transmission, Pathogenesis, and Treatment

HTML Full Text [PDF 213 KB] [Cited by]
Lei KANG, Jing HU, Xue-shan XIA and Jian-guo WU. HIV and HCV: from Co-infection to Epidemiology, Transmission, Pathogenesis, and Treatment[J]. Virologica Sinica, 2007, 22(6): 443-450.
Human immunodeficiency virus (HIV) is the infectious agent causing acquired immu- nodeficiency syndrome (AIDS), a deadliest scourge of human society. Hepatitis C virus (HCV) is a major causative agent of chronic liver disease and infects an estimated 170 million people worldwide, resulting in a serious public health burden. Due to shared routes of transmission, co-infection with HIV and HCV has become common among individuals who had high risks of blood exposures. Among hemophiliacs the co-infection rate accounts for 85%; while among injection drug users (IDU) the rate can be as high as 90%. HIV can accelerate the progression of HCV-related liver disease, particularly when immunodeficiency has developed. Although the effect of HCV on HIV infection is controversial, most studies showed an increase in mortality due to liver disease. HCV may act as a direct cofactor to fasten the progression of AIDS and decrease the tolerance of highly active antiretroviral therapy (HARRT). Conversely, HAART-related hepatotoxicity may enhance the progression of liver fibrosis. Due to above complications, co-infection with HCV and HIV-1 has imposed a critical challenge in the management of these patients. In this review, we focus on the epidemiology and transmission of HIV and HCV, the impact of the two viruses on each other, and their treatment.

HTML Full Text [PDF 267 KB] [Cited by]
Qinxue Hu and Robin Shattock. Novel Antiviral Agents Targeting HIV Entry and Transmission[J]. Virologica Sinica, 2007, 22(6): 451-461.
Studies of the mechanism of HIV entry and transmission have identified multiple new targets for drug development. A range of inhibitors have demonstrated potent antiretroviral activity by interfering with CD4-gp120 interaction, coreceptor binding or viral-cell fusion in preclinical and clinical studies. One of these agents, fusion inhibitor enfuvirtide, is already in clinical use. Here we review the progress in the development of specific entry inhibitors as novel therapeutics. The potential of entry inhibitors as topical microbicides to block HIV transmission is also discussed.

HTML Full Text [PDF 191 KB] [Cited by]
Michael WEN, Hui YANG and Paul ZHOU. 'Unconventional' Neutralizing Activity of Antibodies Against HIV[J]. Virologica Sinica, 2007, 22(6): 462-470.
Neutralizing antibodies are recognized to be one of the essential elements of the adaptive immune response that must be induced by an effective vaccine against HIV. However, only a limited number of antibodies have been identified to neutralize a broad range of primary isolates of HIV-1 and attempts to induce such antibodies by immunization were unsuccessful. The difficulties to generate such antibodies are mainly due to intrinsic properties of HIV-1 envelope spikes, such as high sequence diversity, heavy glycosylation, and inducible and transient nature of certain epitopes. In vitro neutralizing antibodies are identified using “conventional” neutralization assay which uses phytohe- magglutinin (PHA)-stimulated human PBMCs as target cells. Thus, in essence the assay evaluates HIV-1 replication in CD4+ T cells. Recently, several laboratories including us demonstrated that some monoclonal antibodies and HIV-1-specific polyclonal IgG purified from patient sera, although they do not have neutralizing activity when tested by the “conventional” neutralization assay, do exhibit potent and broad neutralizing activity in “unconventional” ways. The neutralizing activity of these antibodies and IgG fractions is acquired through post-translational modifications, through opsonization of virus particles into macrophages and immature dendritic cells (iDCs), or through expression of antibodies on the surface of HIV-1-susceptible cells. This review will focus on recent findings of this area and point out their potential applications in the development of preventive strategies against HIV.

Current Status of Targets and Assays for Anti-HIV Drug Screening

HTML Full Text [PDF 349 KB] [Cited by]
Ren-rong TIAN, Qing-jiao LIAO and Xu-lin CHEN. Current Status of Targets and Assays for Anti-HIV Drug Screening[J]. Virologica Sinica, 2007, 22(6): 476-485.
HIV/AIDS is one of the most serious public health challenges globally. Despite the great efforts that are being devoted to prevent, treat and to better understand the disease, it is one of the main causes of morbidity and mortality worldwide. Currently, there are 30 drugs or combinations of drugs approved by FDA. Because of the side-effects, price and drug resistance, it is essential to discover new targets, to develop new technology and to find new anti-HIV drugs. This review summarizes the major targets and assays currently used in anti-HIV drug screening.

Challenges and Opportunities: the Expanded Government-led HIV/AIDS Programs in China

HTML Full Text [PDF 449 KB] [Cited by]
Ming-hua LI, Shao-you LI, Hou-jun XIA, Lu WANG, Yuan-yuan WANG, Gao-hong ZHANG and Yong-tang ZHENG. Establishment of AIDS Animal Model with SIVmac239 Infected Chinese Rhesus Monkey[J]. Virologica Sinica, 2007, 22(6): 509-516.
In the present research, two Chinese rhesus monkeys were inoculated intravenously with 5000 TCID50 of SIVmac239. The changes in the numbers of CD4+ T lymphocyte in peripheral blood, plasma viral loads, proviral DNA and humoral antibodies against virus were periodically monitored during 121 days. At the early stage of infection, proviral DNA had been detected in PBMCs, and infectious SIVmac239 virus had been isolated from PBMCs. At the same period, the numbers of CD4+ T lymphocytes were significantly decreased, and maintained at low level during the 121-day period of infection. Plasma viral loads reached the peak at week 2 post-inoculation and kept at a steady state subsequently. Moreover, antibodies against viral proteins were detected from plasma. All the results showed that the two Chinese rhesus monkeys had been infected with SIVmac239 successfully. This animal model can be applied for further AIDS researches.