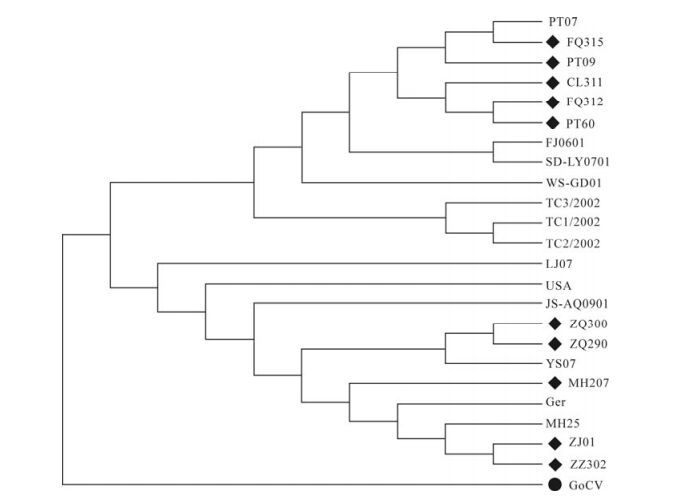 Chun-he Wan, Guang-hua Fu, Shao-hua Shi, Long-fei Cheng, Hong-mei Chen, Chun-xiang Peng, Su Lin and Yu Huang. Epidemiological Investigation and Genome Analysis of Duck Circovirus in Southern China[J]. Virologica Sinica, 2011, 26(5): 289-296. doi: 10.1007/s12250-011-3192-y.
Duck circovirus (DuCV), a potential immunosuppressive virus, was investigated in Southern China from March 2006 to December 2009 by using a polymerase chain reaction (PCR) based method. In this study, a total of 138 sick or dead duck samples from 18 different farms were examined with an average DuCV infection rate of ~35%. It was found that ducks between the ages of 40～60 days were more susceptible to DuCV. There was no evidence showing that the DuCV virus was capable of vertical transmission. Farms with positive PCR results exhibited no regularly apparent clinical abnormalities such as feathering disorders, growth retardation or lower-than-average weight. The complete genomes of 9 strains from Fujian Province and 1 from Zhejiang Province were sequenced and analyzed. The 10 DuCV genomes, compared with others genomes downloaded from GenBank, ranged in size from 1988 to 1996 base pairs, with sequence identities ranging from 83.2% to 99.8%. Phylogenetic analysis based on genome sequences demonstrated that DuCVs can be divided into two distinct genetic genotypes, GroupⅠ(the Euro-USA lineage) and GroupⅡ(the Taiwan lineage), with approximately 10.0% genetic difference between the two types. Molecular epidemiological data suggest there is no obvious difference among DuCV strains isolated from different geographic locations or different species, including Duck, Muscovy duck, Mule duck, Cheery duck, Mulard duck and Pekin duck.

Karpova L S, Popovtseva N M, Stolyarova T P, Stolyarov K A, Mamadaliyev S M, Khairullin B M, Sandybayev N T, Kydyrbayev Zh K, Orynbayev M B, Ospanov K S, Baiserkin B S and Boibosinov E U. Comparison of Influenza Outbreaks in the Republic of Kazakhstan and Russia Induced by 2009 Yearly New Variant of А(H1N1) Influenza Virus[J]. Virologica Sinica, 2011, 26(5): 306-314. doi: 10.1007/s12250-011-3203-z.
The aim of the work is the comparison of the epidemiology of influenza and acute respiratory virus infections (ARVI) in the Republic of Kazakhstan with the corresponding influenza epidemic in Russia induced by influenza pandemic virus A/California/07/2009 in 2009. Data on influenza and ARVI from the Republic of Kazakhstan and Federal Center of influenza was collected and investigated over the course of several weeks from hospitalized patients with the same diagnosis among all population and in age groups on 16 territories of Kazakhstan and in 49 major cities of Russia. The epidemic in Kazakhstan resembled the Russian epidemic in terms of its abnormally early beginning, expression of monoaetiology, the spread of the epidemic into all territories and start of the epidemics among adult population. High percentage of hospitalized people and lethal outcome were registered in this epidemic. Similarity of epidemic process character in corresponding border-line territories of both countries was found out.

Hong-yan Guo, Zhi-bin Liang, Yue Li, Juan Tan, Qi-min Chen and Wen-tao Qiao. A New Indicator Cell Line Established to Monitor Bovine Foamy Virus Infection[J]. Virologica Sinica, 2011, 26(5): 315-323. doi: 10.1007/s12250-011-3204-y.
In order to improve the accuracy for quantitating the bovine foamy virus (BFV) in vitro, we developed a baby hamster kidney cell (BHK)-21-derived indicator cell line containing a plasmid that encodes the firefly luciferase driven by the BFV long terminal repeat promoter (LTR, from -7 to 1012). The BFV titer could be determined by detecting the luciferase expression since the viral trans-activator BTas protein activates the promoter activity of the LTR. One clone, designated BFVL, was selected from ten neomycin-resistant clones. BFVL showed a specific and inducible dose- and time-dependent luciferase activity in response to BFV infection. Although the changes in luciferase activity of BFVL peaked at 84 h post infection, it was possible to differentiate infected and uninfected cells at 48 h post infection. A linear relationship was established between the multiplicity of infection (MOI) of BFV and the activated ratio of luciferase expression in BFVL. Moreover, the sensitivity of the BFVL-based assay for detecting infectious BFV was 10,000 times higher than the conventional CPE-based assay at 48 h post infection. These findings suggest that the BFVL-based assay is rapid, easy, sensitive, quantitative and specific for detection of BFV infection. 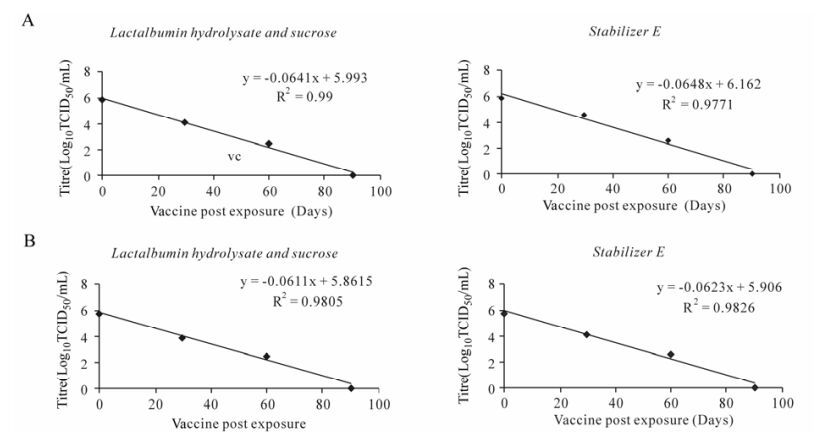 Thachamvally Riyesh, Vinayagamurthy Balamurugan, Arnab Sen, Veerakyathappa Bhanuprakash, Gnanavel Venkatesan, Vinita Yadav and Raj Kumar Singh. Evaluation of Efficacy of Stabilizers on the Thermostability of Live Attenuated Thermo-adapted Peste des petits ruminants Vaccines[J]. Virologica Sinica, 2011, 26(5): 324-337. doi: 10.1007/s12250-011-3205-x.
In this study, thermo-adapted (Ta) PPR vaccines were assessed for their stability at 25, 37, 40, 42 and 45℃ in lyophilized form using two extrinsic stabilizers {lactalbumin hydrolysate-sucrose (LS) and stabilizer E} and in reconstituted form with the diluents (1 mol/L MgSO4 or 0.85% NaCl). The lyophilized vaccines showed an expiry period of 24-26 days at 25℃, 7-8 days at 37℃ and 3-4 days at 40℃. LS stabilizer was superior at 42℃ with a shelf-life of 44 h, whereas in stabilizer E, a 40 h shelf-life with a comparable half-life was observed. At 45℃, the half-life in stabilizer E was better than LS and lasted for 1 day. Furthermore, the reconstituted vaccine maintained the titre for 48 h both at 4℃ and 25℃ and for 24-30 h at 37℃. As both the stabilizers performed equally well with regard to shelf-life and half-life, the present study suggests LS as stabilizer as a choice for lyophilization with 0.85% NaCl diluent, because it has better performance at higher temperature. These Ta vaccines can be used as alternatives to existing vaccines for the control of the disease in tropical countries as they are effective in avoiding vaccination failure due to the breakdown in cold-chain maintenance, as this vaccine is considerably more stable at ambient temperatures. 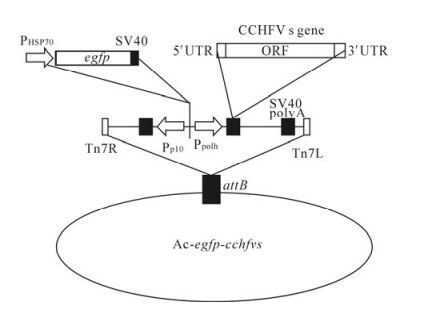 Zhao-rui Zhou, Man-li Wang, Fei Deng, Tian-xian Li, Zhi-hong Hu and Hua-lin Wang. Production of CCHF Virus-Like Particle by a Baculovirus-Insect Cell Expression System[J]. Virologica Sinica, 2011, 26(5): 338-346. doi: 10.1007/s12250-011-3209-6.
Crimean-Congo Haemorrhagic Fever Virus (CCHFV) is a tick-born virus of the Nairovirus genus within the Bunyaviridae family, which is widespread and causes high fatality. The nucleocapsid of CCHFV is comprised of N proteins that are encoded by the S segment. In this research, the N protein of CCHFV was expressed in insect cells using a recombinant baculovirus. Under an electron microscope, Virus-Like Particles (VLPs) with various size and morphology were observed in cytoplasmic vesicles in the infected cells. Sucrose-gradient purification of the cell lysate indicated that the VLPs were mainly located in the upper fraction after ultracentrifugation, which was confirmed by Western blot analysis and immuno-electron microscopy (IEM).

Wei-wei Pan, Jing Long, Jun-ji Xing and Chun-fu Zheng. Molecular Determinants Responsible for the Subcellular Localization of HSV-1 UL4 Protein[J]. Virologica Sinica, 2011, 26(5): 347-356. doi: 10.1007/s12250-011-3217-6.
The function of the herpes simplex virus type 1 (HSV-1) UL4 protein is still elusive. Our objective is to investigate the subcellular transport mechanism of the UL4 protein. In this study, fluorescence microscopy was employed to investigate the subcellular localization of UL4 and characterize the transport mechanism in living cells. By constructing a series of deletion mutants fused with enhanced yellow fluorescent protein (EYFP), the nuclear export signals (NES) of UL4 were for the first time mapped to amino acid residues 178 to 186. In addition, the N-terminal 19 amino acids are identified to be required for the granule-like cytoplasmic pattern of UL4. Furthermore, the UL4 protein was demonstrated to be exported to the cytoplasm through the NES in a chromosomal region maintenance 1 (CRM1)-dependent manner involving RanGTP hydrolysis.
Cover story 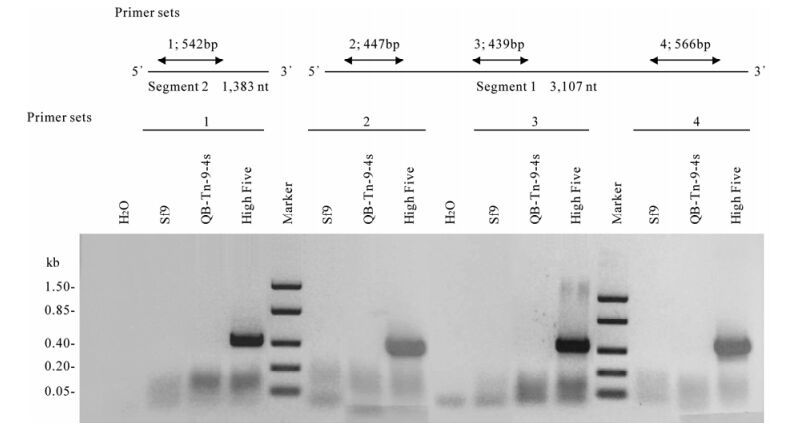 Ming Shan, Shi-ying Zhang, Lei Jiang, Ming Ma and Guo-xun Li. Susceptibility to AcMNPV and Expression of Recombinant Proteins by a Novel Cell Clone Derived from a Trichoplusia ni QAU-BTI-Tn9-4s Cell Line[J]. Virologica Sinica, 2011, 26(5): 297-305. doi: 10.1007/s12250-011-3201-1.
It is well known that Tn5B1-4 (commercially known as the High Five) cell line is highly susceptible to baculovirus and provides superior production of recombinant proteins when compared to other insect cell lines. But the characteristics of the cell line do not always remain stable and may change upon continuous passage. Recently an alphanodavirus, named Tn5 Cell Line Virus (or TNCL Virus), was identified in High Five cells in particular. Therefore, we established a new cell line, QB-Tn9-4s, from Trichoplusia ni, which was determined to be free of TNCL virus by RT-PCR analysis. In this paper, we describe the development of a novel cell clone, QB-CL-B, from a low passage QB-Tn9-4s cell line and report its susceptibility to AcMNPV, and the level of recombinant protein production. This cell clone was similar to its parental cells QB-Tn9-4s and Tn5B1-4 cells in morphology and growth rate; although it also showed approximately the same responses to AcMNPV infection and production of occlusion bodies, there were higher levels of recombinant protein production in comparison to QB-Tn9-4s (parental cells) and High5 cells.