Are the H5N1 Viruses Prepared for Inter-human Transmission?*

Replication Kinetics of Coxsackievirus A16 in Human Rhabdomyosarcoma Cells *

Jun Jin, Mingming Han, Lin Xu, Dong An, Wei Kong and Chunlai Jiang. Replication Kinetics of Coxsackievirus A16 in Human Rhabdomyosarcoma Cells *[J]. Virologica Sinica, 2012, 27(4): 221-227. doi: 10.1007/s12250-012-3245-x.
Coxsackievirus A16 (CVA16), together with enterovirus type 71 (EV71), is responsible for most cases of hand, foot and mouth disease (HFMD) worldwide. Recent findings suggest that the recombination between CVA16 and EV71, and the co-circulation of these two viruses may have contributed to the increase of HFMD cases in China over the past few years. It is therefore important to further understand the virology, epidemiology, virus-host interactions and host pathogenesis of CVA16. In this study, we describe the viral kinetics of CVA16 in human rhabdomyosarcoma (RD) cells by analyzing the cytopathic effect (CPE), viral RNA replication, viral protein expression, viral RNA package and viral particle secretion in RD cells. We show that CVA16 appears to first attach, uncoat and enter into the host cell after adsorption for 1 h. Later on, CVA16 undergoes rapid replication from 3 to 6 h at MOI 1 and until 9 h at MOI 0.1. At MOI 0.1, CVA16 initiates a secondary infection as the virions were secreted before 9 h p.i. CPE was observed after 12 h p.i., and viral antigen was first detected at 6 h p.i. at MOI 1 and at 9 h p.i. at MOI 0.1. Thus, our study provides important information for further investigation of CVA16 in order to better understand and ultimately control infections with this virus.

Vinayagamurthy Balamurugan, Arnab Sen, Gnanavel Venkatesan, Kaushal Kishor Rajak, Veerakyathappa Bhanuprakash and Raj Kumar Singh. Study on Passive Immunity: time of Vaccination in Kids Born to Goats Vaccinated Against Peste des petits ruminants*[J]. Virologica Sinica, 2012, 27(4): 228-233. doi: 10.1007/s12250-012-3249-6.
In this study, the decay of maternal peste des petits ruminants virus (PPRV) antibodies in kids born to goats vaccinated with Asian lineage IV PPR vaccine and the efficacy of passive immunity against PPRV was assessed to determine the appropriate period for vaccination in kids. Serum samples collected from kids born to vaccinated, unvaccinated and infected goats at different time intervals were tested by PPR competitive ELISA and serum neutralization test (SNT). Maternal antibodies in kids were detectable up to 6 months with a decline trend from the third month onwards and receded below the protective level by the fourth month. The kid with an SN titre of 1:8 at the time of immunization showed significant PPRV specific antibody response (percentage inhibition of 76; SN titers >1:16), when tested on 21 day post-vaccination and was completely protected from infection upon virulent PPRV challenge. Similarly, the kid with 1:8 SN titers was completely protected from PPR infection on active challenge. Therefore, PPR vaccination is recommended in kids, aged 4 months and born to immunized or exposed goats. This could be a suitable period to avoid window of susceptibility in kids to PPRV and the effort to eliminate PPR infection from susceptible populations. 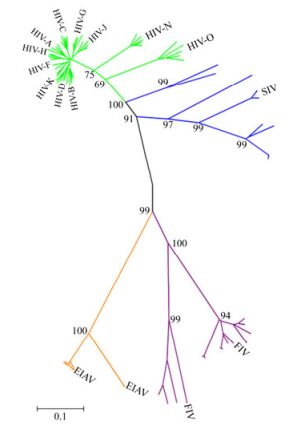 Qing Yuan, Chang Liu, Zhipin Liang, Xueqing Chen, Danhong Diao and Xiaohong Kong. The Comparison of Genetic Variation in the Envelope Protein Between Various Immunodeficiency Viruses and Equine Infectious Anemia Virus*[J]. Virologica Sinica, 2012, 27(4): 241-247. doi: 10.1007/s12250-012-3253-x.
The envelope protein (Env) of lentiviruses such as HIV, SIV, FIV and EIAV is larger than that of other retroviruses. The Chinese EIAV attenuated vaccine is based on Env and has helped to successfully control this virus, demonstrating that envelope is crucial for vaccine. We compared Env variation of the four kinds of lentiviruses. Phylogenetic analysis showed that the evolutionary relationship of Env between HIV and SIV was the closest and they appeared to descend from a common ancestor, and the relationship of HIV and EIAV was the furthest. EIAV had the shortest Env length and the least number of potential N-linked glycosylation sites (PNGS) as well as glycosylation density compared to various immunodeficiency viruses. However, HIV had the longest Env length and the most PNGS. Moreover, the alignment of HIV and SIV showed that PNGS were primarily distributed within extracellular membrane protein gp120 rather than transmembrane gp41. It implies that the size difference among these viruses is associated with a lentivirus specific function and also the diversity of env. There are low levels of modification of glycosylation sites of Env and selection of optimal protective epitopes might be useful for development of an effective vaccine against HIV/AIDS. Jiming Gao, Junhao Chen, Xingkui Si, Zhijing Xie, Yanli Zhu, Xingxiao Zhang, Shujing Wang and Shijin Jiang. Genetic Variation of the VP1 Gene of the Virulent Duck Hepatitis A Virus Type 1 (DHAV-1) Isolates in Shandong Province of China *[J]. Virologica Sinica, 2012, 27(4): 248-253. doi: 10.1007/s12250-012-3255-8.
To investigate the relationship of the variation of virulence and the external capsid proteins of the pandemic duck hepatitis A virus type 1 (DHAV-1) isolates, the virulence, cross neutralization assays and the complete sequence of the virion protein 1 (VP1) gene of nine virulent DHAV-1 strains, which were isolated from infected ducklings with clinical symptoms in Shandong province of China in 2007-2008, were tested. The fifth generation duck embryo allantoic liquids of the 9 isolates were tested on 12-day-old duck embryos and on 7-day-old ducklings for the median embryonal lethal doses (ELD50s) and the median lethal doses (LD50s), respectively. The results showed that the ELD50s of embryonic duck eggs of the 9 DHAV-1 isolates were between 1.9 × 106/mL to 1.44 × 107/mL, while the LD50s were 2.39 × 105/mL to 6.15 × 106/mL. Cross-neutralization tests revealed that the 9 DHAV-1 isolates were completely neutralized by the standard serum and the hyperimmune sera against the 9 DHAV-1 isolates, respectively. Compared with other virulent, moderate virulent, attenuated vaccine and mild strains, the VP1 genes of the 9 strains shared 89.8%–99.7% similarity at the nucleotide level and 92.4%–99.6% at amino acid level with other DHAV-1 strains. There were three hypervariable regions at the C-terminus (aa 158-160, 180-193 and 205-219) and other variable points in VP1 protein, but which didn’t cause virulence of DHAV-1 change.

Xue Han, Xiaoling Ying, Hao Huang, Shili Zhou and Qi Huang. Expression and Purification of Enterovirus Type 71 Polyprotein P1 using Pichia pastorissystem *[J]. Virologica Sinica, 2012, 27(4): 254-258. doi: 10.1007/s12250-012-3256-7.
Enterovirus type 71(EV71) causes severe hand-foot-and-mouth disease (HFMD) resulting in hundreds of deaths of children every year; However, currently, there is no effective treatment for EV71. In this study, the EV71 poly-protein (EV71-P1 protein) gene was processed and cloned into the eukaryotic expression vector pPIC9k and then expressed in Pichia pastoris strain GS115. The EV71 P1 protein with a molecular weight of 100 kD was produced and secreted into the medium. The soluble EV71 P1 protein was purified by column chromatography with a recovery efficiency of 70%. The result of the immunological analysis showed that the EV71 P1 protein had excellent immunogenicity and could stimulate the production of EV71-VP1 IgG antibody in injected rabbits. We suggest that EV71-P1 protein is an ideal candidate for an EV71 vaccine to prevent EV71 infection.

Ye Liu, Shoufeng Zhang, Fei Zhang and Rongliang Hu. A Semi-quantitative Serological Method to Assess the Potency of Inactivated Rabies Vaccine for Veterinary Use *[J]. Virologica Sinica, 2012, 27(4): 259-264. doi: 10.1007/s12250-012-3260-y.
Potency is one of the most important indexes of inactivated vaccines. A number of methods have been established to assay the potency, of which the NIH test and single-dose mouse protection test are the “prescribed methods”. Here, we report a method to semi-quantitatively assay the potency of an inactivated rabies vaccine, which uses fewer animals and takes less time to complete. Depending on the quality requirements of a vaccine (e.g. minimum potency), a rabies reference vaccine is, for example, diluted to the minimum potency, and 50 μL of the dilution is taken to inoculate 10 mice. The same amount of the test rabies vaccine is inoculated into another 10 mice. After two weeks, all mice are bled and serum samples are assayed for viral neutralizing antibody by the fluorescent antibody virus neutralization (FAVN) test. By comparing the median and interquartile range of antibody titers of the reference vaccine with those of the test vaccine, the test vaccine potency can be semi-quantitatively judged as to whether it is in accord with the required quality. The reliability of this method was also confirmed in dogs. The procedure can be recommended for batch potency testing during inactivated rabies vaccine production. Arun Pate, Kaushal Kishor Rajak, Vinayagamurthy Balamurugan, Arnab Sen, Shashi Bhusan Sudhakar, Veerakyathappa Bhanuprakash, Raj Kumar Singh and Awadh Bihari Pandey. Cytokines Expression Profile and Kinetics of Peste des petits ruminants Virus Antigen and Antibody in Infected and Vaccinated Goats[J]. Virologica Sinica, 2012, 27(4): 265-271. doi: 10.1007/s12250-012-3240-2.
The present study deals with the co-ordination of cytokine (IL-4 and IFN-γ) expression and kinetics of peste des petits ruminants (PPR) virus antigen and antibody in PPRV infected and vaccinated goats. The infected animals exhibited mixed cytokine (both TH1 and TH2) responses in the initial phase of the disease. The infected and dead goats had increased IFN-γ response before their death; while IL-4 remained at the base level. The cytokine expression in recovered animals was almost similar to that of vaccinated ones, where a unique biphasic response of IL-4 expression was observed with an up-regulation of IFN-γ on 7th days post vaccination (dpv). Analysis of PPR virus antigen and antibody kinetics in different components of blood from infected and vaccinated animals revealed that the PPR virus antigen load was highest in plasma followed by serum and blood of the infected animals, whereas vaccinated animals showed only marginal positivity on 9th dpv. The antibody titer was high in serum followed by plasma and blood in both vaccinated and infected animals. Therefore, it is inferred that the presence of antigen and antibody were significant with the expression of cytokine, and that a decreased response of IL-4 was noticed during intermediate phase of the disease i.e., 7 to 12th days post infection (dpi). This indicates the ability to mount a functional TH2 response after 14th dpi could be a critical determinant in deciding the survival of the PPR infected animal.
Cover story Xiuning Sun, YingJun Guan, Fengjie Li, Xutong Li, Xiaowen Wang, Zhiyu Guan, Kai Sheng, Li Yu and Zhijun Liu. Effects of Rat Cytomegalovirus on the Nervous System of the Early Rat Embryo *[J]. Virologica Sinica, 2012, 27(4): 234-240. doi: 10.1007/s12250-012-3250-0.
The purpose of the study was to investigate the impact of rat cytomegalovirus (RCMV) infection on the development of the nervous system in rat embryos, and to evaluate the involvement of Wnt signaling pathway key molecules and the downstream gene neurogenin 1 (Ngn1) in RCMV infected neural stem cells (NSCs). Infection and control groups were established, each containing 20 pregnant Wistar rats. Rats in the infection group were inoculated with RCMV by intraperitoneal injection on the first day of pregnancy. Rat E20 embryos were taken to evaluate the teratogenic rate. NSCs were isolated from E13 embryos, and maintained in vitro. We found: 1) Poor fetal development was found in the infection group with low survival and high malformation rates. 2) The proliferation and differentiation of NSCs were affected. In the infection group, NSCs proliferated more slowly and had a lower neurosphere formation rate than the control. The differentiation ratio from NSCs to neurons and glial cells was significantly different from that of the control, showed by immunofluorescence staining. 3) Ngn1 mRNA expression and the nuclear β-catenin protein level were significantly lower than the control on day 2 when NSCs differentiated. 4) The Morris water maze test was performed on 4-week pups, and the infected rats were found worse in learning and memory ability. In a summary, RCMV infection caused abnormalities in the rat embryonic nervous system, significantly inhibited NSC proliferation and differentiation, and inhibited the expression of key molecules in the Wnt/β-catenin signaling pathway so as to affect NSCs differentiation. This may be an important mechanism by which RCMV causes embryonic nervous system abnormalities.