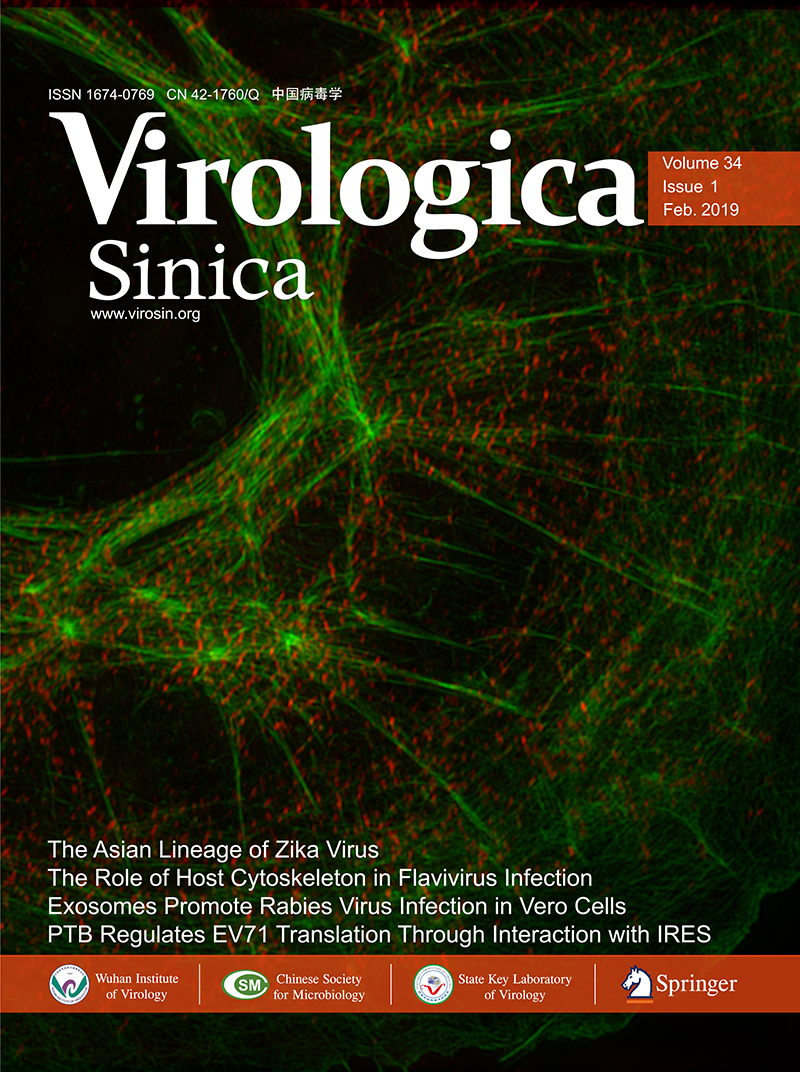 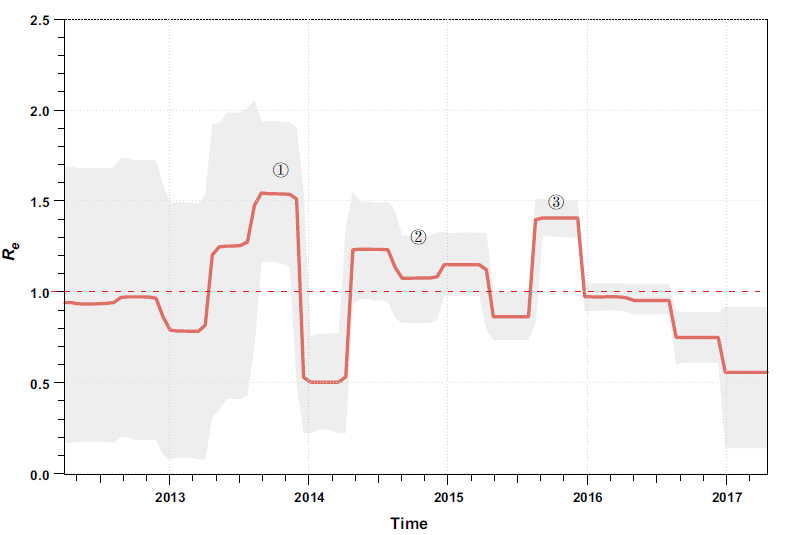 The Asian Lineage of Zika Virus: Transmission and Evolution in Asia and the Americas

Tao Hu, Juan Li, Michael J. Carr, Sebastián Duchȇne and Weifeng Shi. The Asian Lineage of Zika Virus: Transmission and Evolution in Asia and the Americas[J]. Virologica Sinica, 2019, 34(1): 1-8. doi: 10.1007/s12250-018-0078-2.
Since first isolation in 1947 from the Zika forest in Uganda, Zika virus (ZIKV) has been principally known as a benign agent associated with sporadic human infections in a restricted number of African countries. However, during 2015–2016, an Asian lineage of ZIKV caused an unprecedentedly large outbreak in the Americas and sizeable numbers of exported cases across the globe. In this review, we critically appraise the recent advances in molecular epidemiological studies of ZIKV performed to date, and we highlight the pivotal role played by genomic surveillance in elucidating the origins, dissemination and evolution of the Asian lineage of ZIKV in Asia and in the Americas. 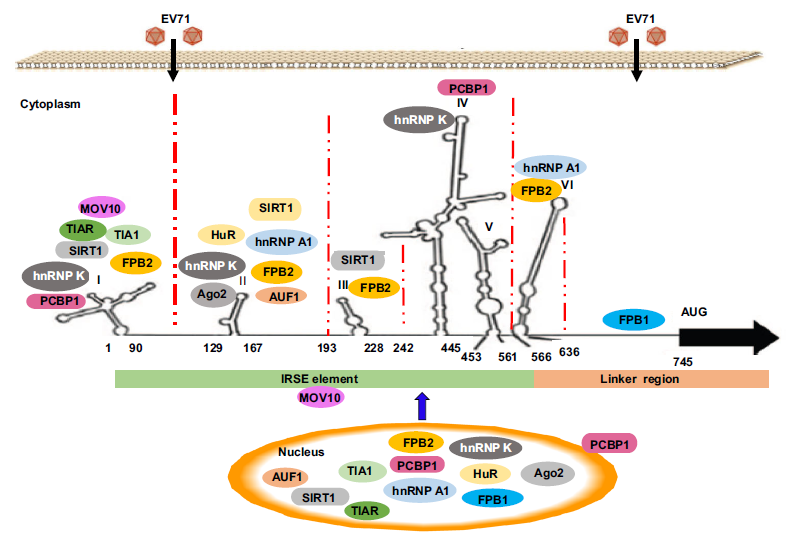 Huiqiang Wang and Yuhuan Li. Recent Progress on Functional Genomics Research of Enterovirus 71[J]. Virologica Sinica, 2019, 34(1): 9-21. doi: 10.1007/s12250-018-0071-9.
Enterovirus 71 (EV71) is one of the main pathogens that causes hand-foot-and-mouth disease (HFMD). HFMD caused by EV71 infection is mostly self-limited; however, some infections can cause severe neurological diseases, such as aseptic meningitis, brain stem encephalitis, and even death. There are still no effective clinical drugs used for the prevention and treatment of HFMD. Studying EV71 protein function is essential for elucidating the EV71 replication process and developing anti-EV71 drugs and vaccines. In this review, we summarized the recent progress in the studies of EV71 noncoding regions (5' UTR and 3' UTR) and all structural and nonstructural proteins, especially the key motifs involving in viral infection, replication, and immune regulation. This review will promote our understanding of EV71 virus replication and pathogenesis, and will facilitate the development of novel drugs or vaccines to treat EV71. 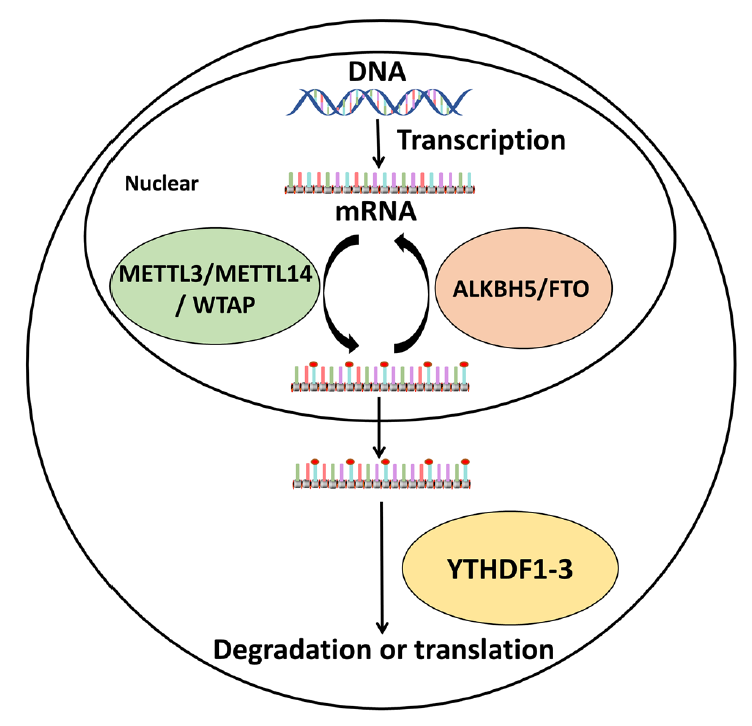 Regulation of Virus Replication and T Cell Homeostasis by N6-Methyladenosine

Jing Yang, Hong Wang and Wenyan Zhang. Regulation of Virus Replication and T Cell Homeostasis by N6-Methyladenosine[J]. Virologica Sinica, 2019, 34(1): 22-29. doi: 10.1007/s12250-018-0075-5.
RNA modifications are abundant in eukaryotes, bacteria, and archaea. N6-methyladenosine (m6A), a type of RNA modification mainly found in messenger RNA (mRNA), has significant effects on the metabolism and function of mRNAs. This modification is governed by three types of proteins, namely methyltransferases as "writers", demethylases as "erasers", and specific m6A-binding proteins (YTHDF1-3) as "readers". Further, it is important for the regulation of cell fate and has a critical function in many biological processes including virus replication, stem cell differentiation, and cancer development, and exerts its effect by controlling gene expression. Herein, we summarize recent advances in research on m6A in virus replication and T cell regulation, which is a rapidly emerging field that will facilitate the development of antiviral therapies and the study of innate immunity. 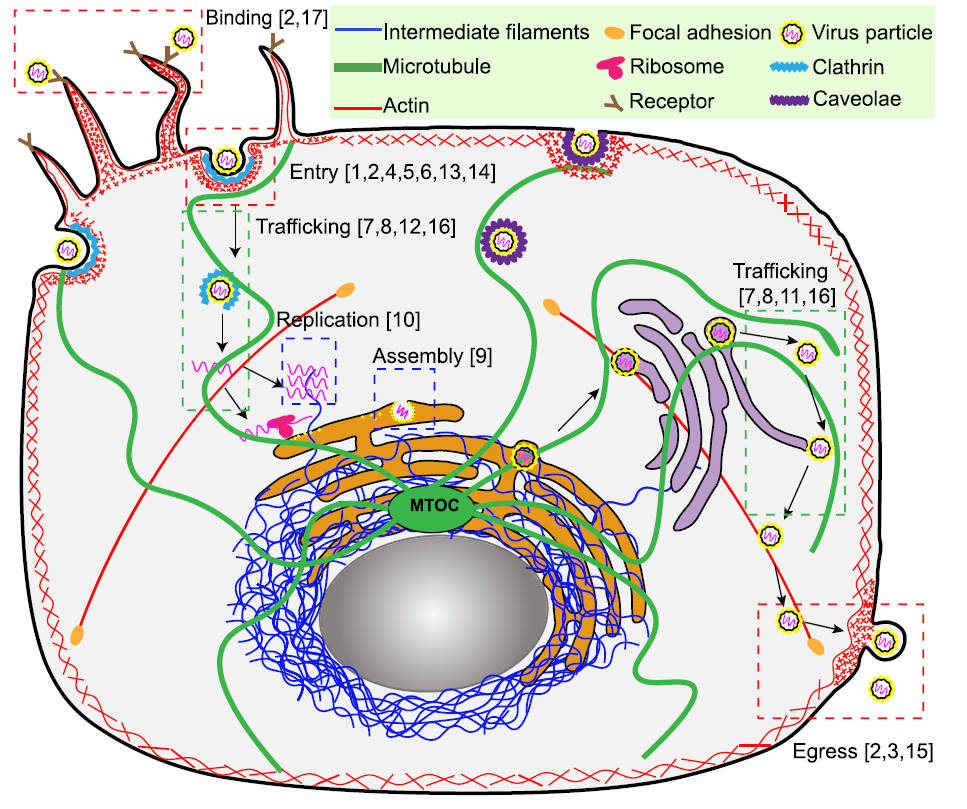 The Role of Host Cytoskeleton in Flavivirus Infection

Yue Zhang, Wei Gao, Jian Li, Weihua Wu and Yaming Jiu. The Role of Host Cytoskeleton in Flavivirus Infection[J]. Virologica Sinica, 2019, 34(1): 30-41. doi: 10.1007/s12250-019-00086-4.
The family of flaviviruses is one of the most medically important groups of emerging arthropod-borne viruses. Host cell cytoskeletons have been reported to have close contact with flaviviruses during virus entry, intracellular transport, replication, and egress process, although many detailed mechanisms are still unclear. This article provides a brief overview of the function of the most prominent flaviviruses-induced or -hijacked cytoskeletal structures including actin, microtubules and intermediate filaments, mainly focus on infection by dengue virus, Zika virus and West Nile virus. We suggest that virus interaction with host cytoskeleton to be an interesting area of future research.
RESEARCH ARTICLE 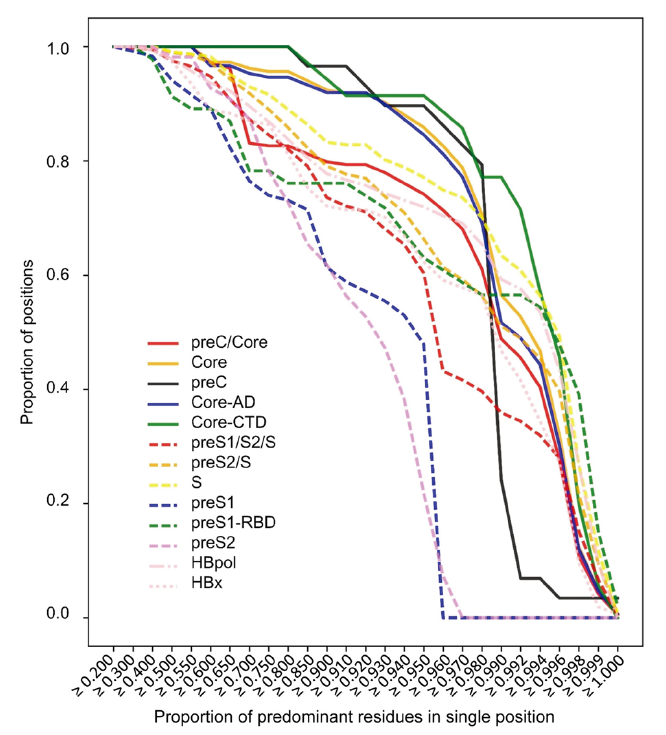 The Variability of Amino Acid Sequences in Hepatitis B Virus

Jianhao Cao, Shuhong Luo and Yuanyan Xiong. The Variability of Amino Acid Sequences in Hepatitis B Virus[J]. Virologica Sinica, 2019, 34(1): 42-49. doi: 10.1007/s12250-018-0070-x.
Hepatitis B virus (HBV) is an important human pathogen belonging to the Hepadnaviridae family, Orthohepadnavirus genus. Over 240 million people are infected with HBV worldwide. The reverse transcription during its genome replication leads to low fidelity DNA synthesis, which is the source of variability in the viral proteins. To investigate the variability quantitatively, we retrieved amino acid sequences of 5, 167 records of all available HBV genotypes (A–J) from the Genbank database. The amino acid sequences encoded by the open reading frames (ORF) S/C/P/X in the HBV genome were extracted and subjected to alignment. We analyzed the variability of the lengths and the sequences of proteins as well as the frequencies of amino acids. It comprehensively characterized the variability and conservation of HBV proteins at the level of amino acids. Especially for the structural proteins, hepatitis B surface antigens (HBsAg), there are potential sites critical for virus assembly and immune recognition. Interestingly, the preS1 domains in HBsAg were variable at some positions of amino acid residues, which provides a potential mechanism of immune-escape for HBV, while the preS2 and S domains were conserved in the lengths of protein sequences. In the S domain, the cysteine residues and the secondary structures of the alpha-helix and beta-sheet were likely critical for the stable folding of all HBsAg components. Also, the preC domain and C-terminal domain of the core protein are highly conserved. However, the polymerases (HBpol) and the HBx were highly variable at the amino acid level. Our research provides a basis for understanding the conserved and important domains of HBV viral proteins, which could be potential targets for anti-virus therapy. 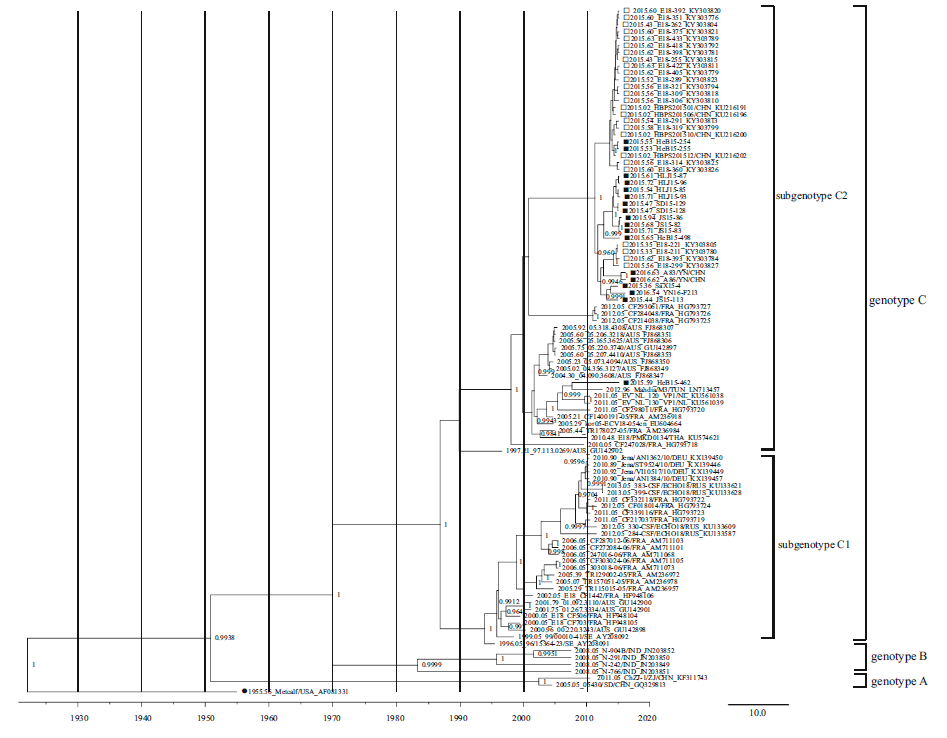 Xiangpeng Chen, Tianjiao Ji, Jiayun Guo, Wei Wang, Wenbo Xu and Zhengde Xie. Molecular Epidemiology of Echovirus 18 Circulating in Mainland China from 2015 to 2016[J]. Virologica Sinica, 2019, 34(1): 50-58. doi: 10.1007/s12250-018-0080-8.
Echovirus 18 (E18), a serotype of Enterovirus B (EV-B) species, is an important pathogen in aseptic meningitis. E18 had rarely been detected in mainland China, but became the predominant pathogen associated with viral encephalitis (VE) and meningitis in Hebei province for the first time in 2015. To investigate the molecular epidemiology and genetic characteristics of E18 in mainland China, sixteen E18 strains from patient throat swabs with hand, foot, and mouth disease (HFMD) in six provinces in China collected between 2015 and 2016, and four E18 strains isolated from 18 patient cerebrospinal fluid specimens with VE in Hebei Province in 2015 were obtained and sequenced. Combined with the sequences from the GenBank database, we performed an extensive genetic analysis. Phylogenetic analysis of VP1 gene sequences revealed that all E18 strains from mainland China after 2015 belonged to subgenotype C2. There were no obvious specific differences in phylogenetic and variation analyses of E18 genome sequences between HFMD and VE/meningitis strains. Potential multiple recombination may have occurred in the 50-untranslated region and in the P2 and P3 nonstructural protein-encoding regions of E18 strains from China. The current E18 strains were potential multiplerecombinant viruses. Overall, these findings supported that E18 caused HFMD, VE, and meningitis, although there were no significant associations between clinical features and viral genomic characteristics. 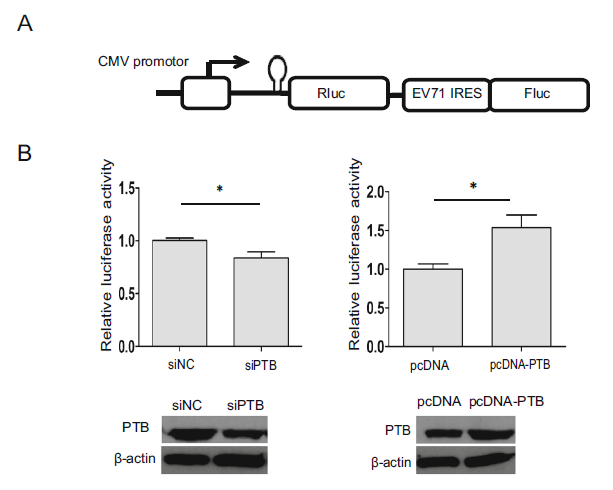 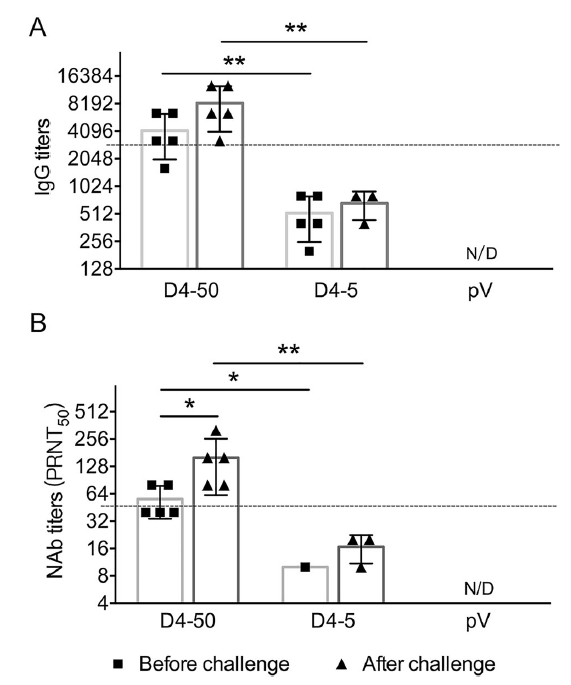 Ziyang Sheng, Hui Chen, Kaihao Feng, Na Gao, Ran Wang, Peigang Wang, Dongying Fan and Jing An. Electroporation-Mediated Immunization of a Candidate DNA Vaccine Expressing Dengue Virus Serotype 4 prM-E Antigen Confers Long-Term Protection in Mice[J]. Virologica Sinica, 2019, 34(1): 88-96. doi: 10.1007/s12250-019-00090-8.
Dengue fever, caused by dengue viruses (DENVs), is a widespread mosquito-borne zoonotic disease; however, there is no available anti-dengue vaccine for worldwide use. In the current study, a DNA vaccine candidate (pV-D4ME) expressing prM-E protein of DENV serotype 4 (DENV-4) was constructed, and its immunogenicity and protection were evaluated in immunocompetent BALB/c mice. The pV-D4ME candidate vaccine induced effective humoral and cellular immunity of mice against DENV-4 in vivo when administered both at 50 μg and 5 μg through electroporation. Two weeks after receiving three immunizations, both doses of pV-D4ME DNA were shown to confer effective protection against lethal DENV-4 challenge. Notably, at 6 months after the three immunizations, 50 μg, but not 5 μg, of pV-D4ME could provide stable protection (100% survival rate) against DENV-4 lethal challenge without any obvious clinical signs. These results suggest that immunization with 50 μg pV-D4ME through electroporation could confer effective and long-term protection against DENV-4, offering a promising approach for development of a novel DNA vaccine against DENVs.
LETTER 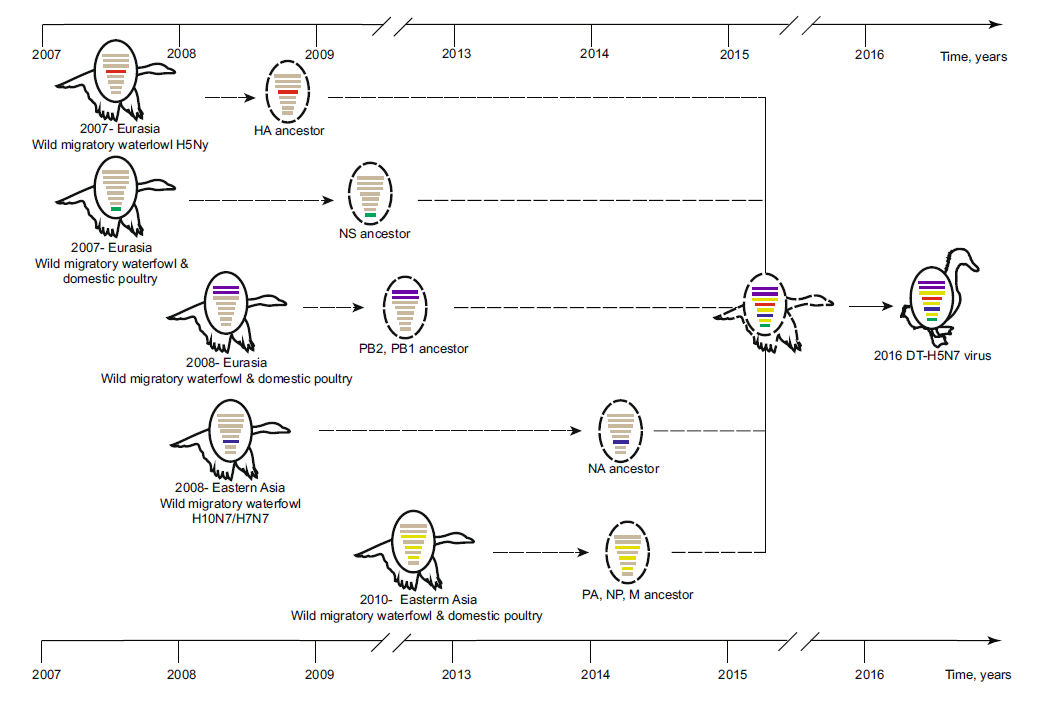 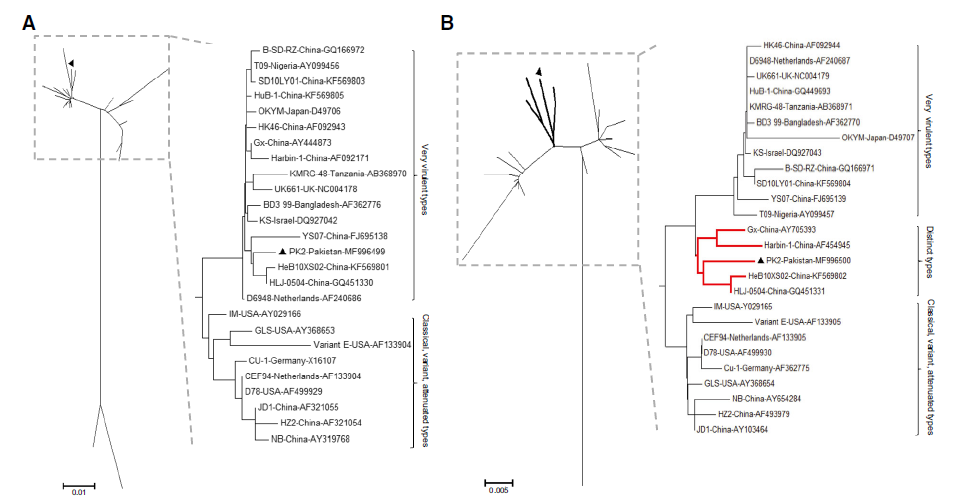 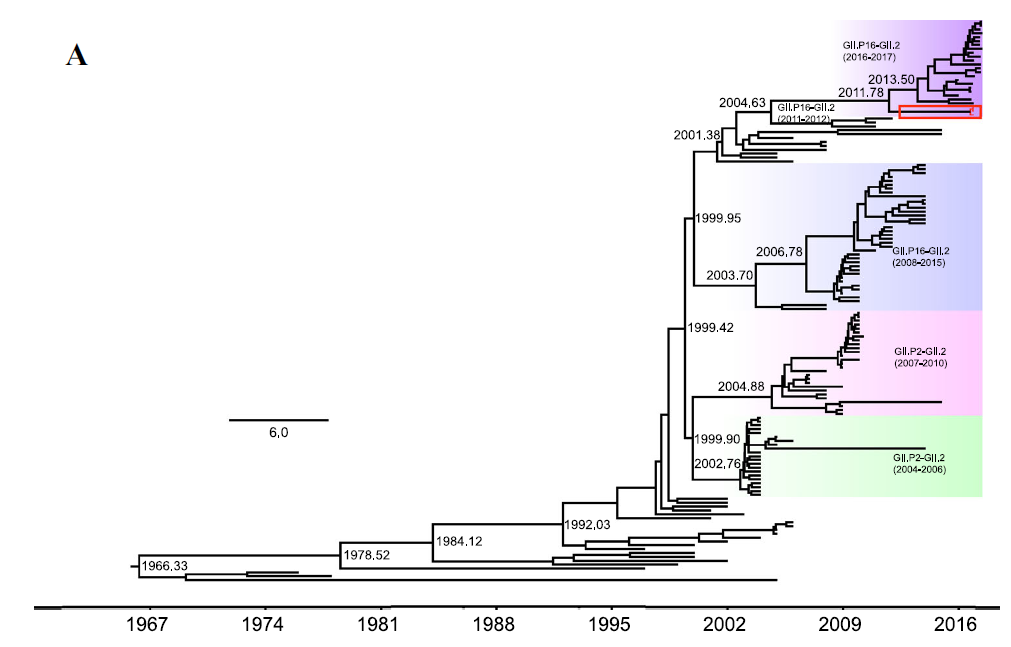 Genetic Analysis of an Emerging GII.P2–GII.2 Norovirus Associated with a 2016 Outbreak of Acute Gastroenteritis in China 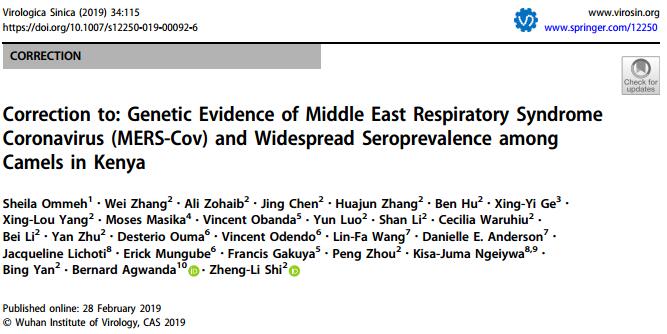