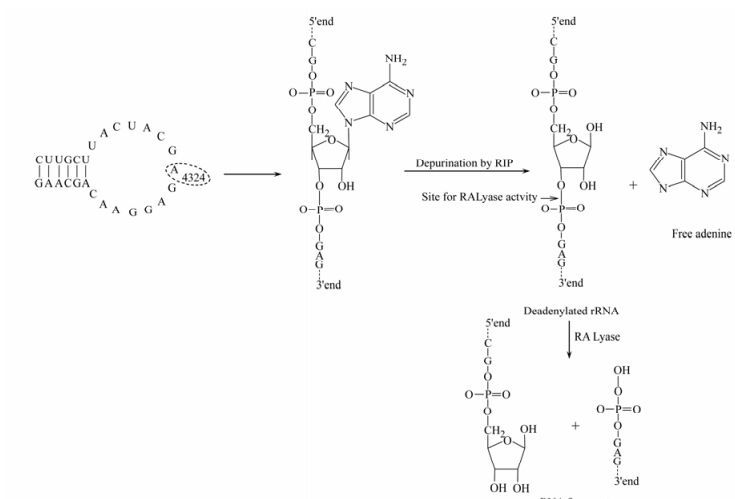 Inderdeep Kaur, C Gupta R and Puri Munish. Ribosome Inactivating Proteins from Plants Inhibiting Viruses *[J]. Virologica Sinica, 2011, 26(6): 357-365. doi: 10.1007/s12250-011-3223-8.
Many plants contain ribosome inactivating proteins (RIPs) with N-glycosidase activity, which depurinate large ribosomal RNA and arrest protein synthesis. RIPs so far tested inhibit replication of mRNA as well as DNA viruses and these proteins, isolated from plants, are found to be effective against a broad range of viruses such as human immunodeficiency virus (HIV), hepatitis B virus (HBV) and herpes simplex virus (HSV). Most of the research work related to RIPs has been focused on antiviral activity against HIV; however, the exact mechanism of antiviral activity is still not clear. The mechanism of antiviral activity was thought to follow inactivation of the host cell ribosome, leading to inhibition of viral protein translation and host cell death. Enzymatic activity of RIPs is not limited to depurination of the large rRNA, in addition they can depurinate viral DNA as well as RNA. Recently, Phase I/II clinical trials have demonstrated the potential use of RIPs for treating patients with HIV disease. The aim of this review is to focus on various RIPs from plants associated with anti-HIV activity.

Yan-bin Ma and Hui-yun Chang. Caspase Work Model During Pathogen Infection *[J]. Virologica Sinica, 2011, 26(6): 366-375. doi: 10.1007/s12250-011-3218-5.
Caspases are an evolutionarily conserved family of aspartate-specific cystein-dependent proteases with essential functions in apoptosis and normally exist in cells as inactive proenzymes. In addition to the inflammatory caspases, the initiator and effector caspases have been shown to have an important role in regulating the immune response, but are involved in different ways. We give a brief introduction on the benefit of apoptosis on the clearance of invasive pathogens, and the caspase functions involved in the immune response. Then we construct a working model of caspases during pathogen invasion. A detailed description of the three modes is given in the discussion. These three modes are regulated by different inhibitors, and there may be a novel way to treat intracellular pathogen and autoimmune diseases based on the specific inhibitors. 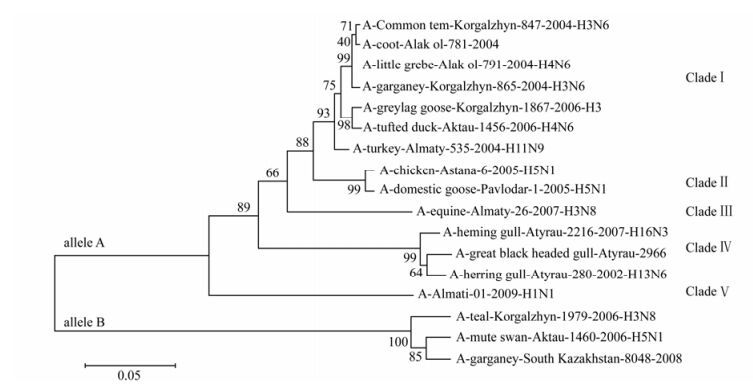 Andrey Bogoyavlenskiy, Vladimir Berezin, Alexey Prilipov, Ilya Korotetskiy, Irina Zaitseva, Aydyn Kydyrmanov, Kobey Karamedin, Nailya Ishmukhametova, Saule Asanova, Marat Sayatov and Kainar Zhumatov. Phylogenetic Analysis of the Non-structural (NS) Gene of Influenza A Viruses Isolated in Kazakhstan in 2002-2009 *[J]. Virologica Sinica, 2011, 26(6): 376-388. doi: 10.1007/s12250-011-3208-7.
Although the important role of the non-structural (NS1 and NEP) gene of influenza A in virulence of the virus is well established, our knowledge about the extent of variation in the NS gene pool of influenza A viruses in their natural reservoirs in Kazakhstan is incomplete. 17 influenza A viruses of different subtypes were studied in this paper. Seven types of haemagglutinin and five different neuraminidase subtypes in eight combinations were found among the isolated viruses. A comparison of nucleotide sequences of isolated viruses revealed a substantial number of silent mutations, which results in high degree of homology in amino acid sequences. By phylogenetic analysis it was shown that two distinct gene pools, corresponding to both NS allele A with 5 Clades and B, were present at the same time in Kazakhstan. The degree of variation within the alleles was very low. In our study allele A viruses had a maximum of 5% amino acid divergence in Clade while allele B viruses had only 4% amino acid divergence.

Emerging Trends of Drug-Resistant HIV-1 among Drug-Treated Patients in Former Blood Donors in Hubei, China: a Three-Year Surveillance from 2004 to 2006

Jun Zhuang, Jian-hua Wang, Xin Zhang and Zhi-xin Liu. Molecular Characterization of Banana streak virus Isolate from Musa Acuminata in China *[J]. Virologica Sinica, 2011, 26(6): 393-402. doi: 10.1007/s12250-011-3212-y.
Banana streak virus (BSV), a member of genus Badnavirus, is a causal agent of banana streak disease throughout the world. The genetic diversity of BSVs from different regions of banana plantations has previously been investigated, but there are relatively few reports of the genetic characteristic of episomal (non-integrated) BSV genomes isolated from China. Here, the complete genome, a total of 7722bp (GenBank accession number DQ092436), of an isolate of Banana streak virus (BSV) on cultivar Cavendish (BSAcYNV) in Yunnan, China was determined. The genome organises in the typical manner of badnaviruses. The intergenic region of genomic DNA contains a large stem-loop, which may contribute to the ribosome shift into the following open reading frames (ORFs). The coding region of BSAcYNV consists of three overlapping ORFs, ORF1 with a non-AUG start codon and ORF2 encoding two small proteins are individually involved in viral movement and ORF3 encodes a polyprotein. Besides the complete genome, a defective genome lacking the whole RNA leader region and a majority of ORF1 and which encompasses 6525bp was also isolated and sequenced from this BSV DNA reservoir in infected banana plants. Sequence analyses showed that BSAcYNV has closest similarity in terms of genome organization and the coding assignments with an BSV isolate from Vietnam (BSAcVNV). The corresponding coding regions shared identities of 88% and ~95% at nucleotide and amino acid levels, respectively. Phylogenetic analysis also indicated BSAcYNV shared the closest geographical evolutionary relationship to BSAcVNV among sequenced banana streak badnaviruses. 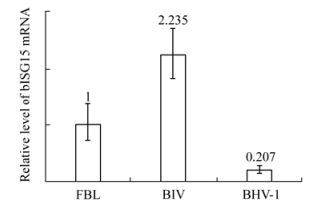 Chang Liu, Xiao-hong Kong, Wen-tao Qiao and Yun-qi Geng. Bovine Herpesvirus 1 Protein bICP0 Represses the Transcription of bISG15 in Fetal Bovine Lung Cells *[J]. Virologica Sinica, 2011, 26(6): 403-408. doi: 10.1007/s12250-011-3213-x.
The ubiquitin-like modifier bISG15 is an antiviral protein found in fetal bovine lung (FBL) cells. Bovine Herpesvirus 1(BHV-1), which is a viral pathogen of cattle, can infect FBL cells and induce cytopathic effects. Real-time PCR assays showed that BHV-1’s infection could repress the basal or inducible transcription of bISG15 in FBL cells. It demonstrates that this repression effect depends on BHV-1 viral infection and new protein synthesis. Our previous work showed that bIRF-3 was the key factor in the stimulation of bISG15 in FBL cells, so the effect of BHV-1 viral protein on bIRF-3 activating the promoter of bISG15 was confirmed. The luciferase assay showed the BHV-1 viral protein bICP0 inhibited the activation of bISG15 promoter stimulated by bIRF-3. Taken together, our work suggested that BHV-1 had some molecular mechanism to resist the cellular bISG15’s antiviral functions. 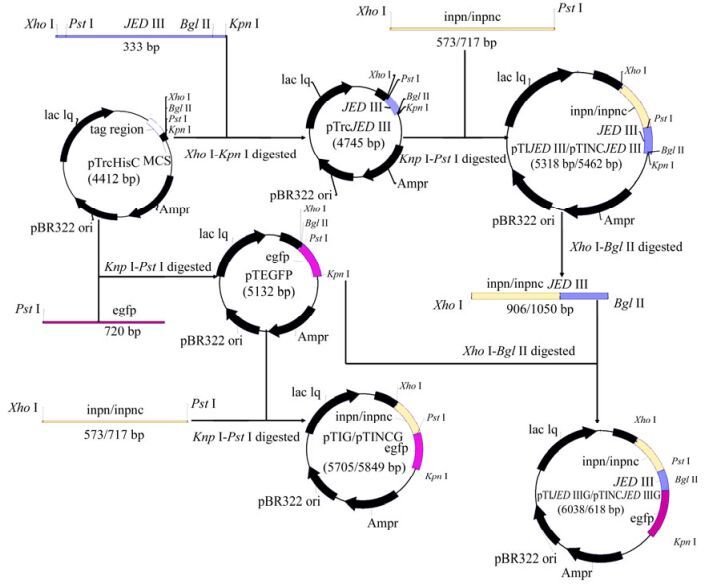 Jian-lin Dou, Tao Jing, Jing-jing Fan and Zhi-ming Yuan. Surface Display of Domain Ⅲ of Japanese Encephalitis Virus E Protein on Salmonella Typhimurium by Using an Ice Nucleation Protein *[J]. Virologica Sinica, 2011, 26(6): 409-417. doi: 10.1007/s12250-011-3216-7.
A bacterial cell surface display technique based on an ice nucleation protein has been employed for the development of live vaccine against viral infection. Due to its ubiquitous ability to invade host cells, Salmonella typhimurium might be a good candidate for displaying viral antigens. We demonstrated the surface display of domain III of Japanese encephalitis virus E protein and the enhanced green fluorescent protein on S. typhimurium BRD509 using the ice nucleation protein. The effects of the motif in the ice nucleation protein on the effective display of integral protein were also investigated. The results showed that display motifs in the protein can target integral foreign protein on the surface of S. typhimurium BRD509. Moreover, recombinant strains with surface displayed viral proteins retained their invasiveness, suggesting that the recombinant S. typhimurium can be used as live vaccine vector for eliciting complete immunogenicity. The data may yield better understanding of the mechanism by which ice nucleation protein displays foreign proteins in the Salmonella strain. 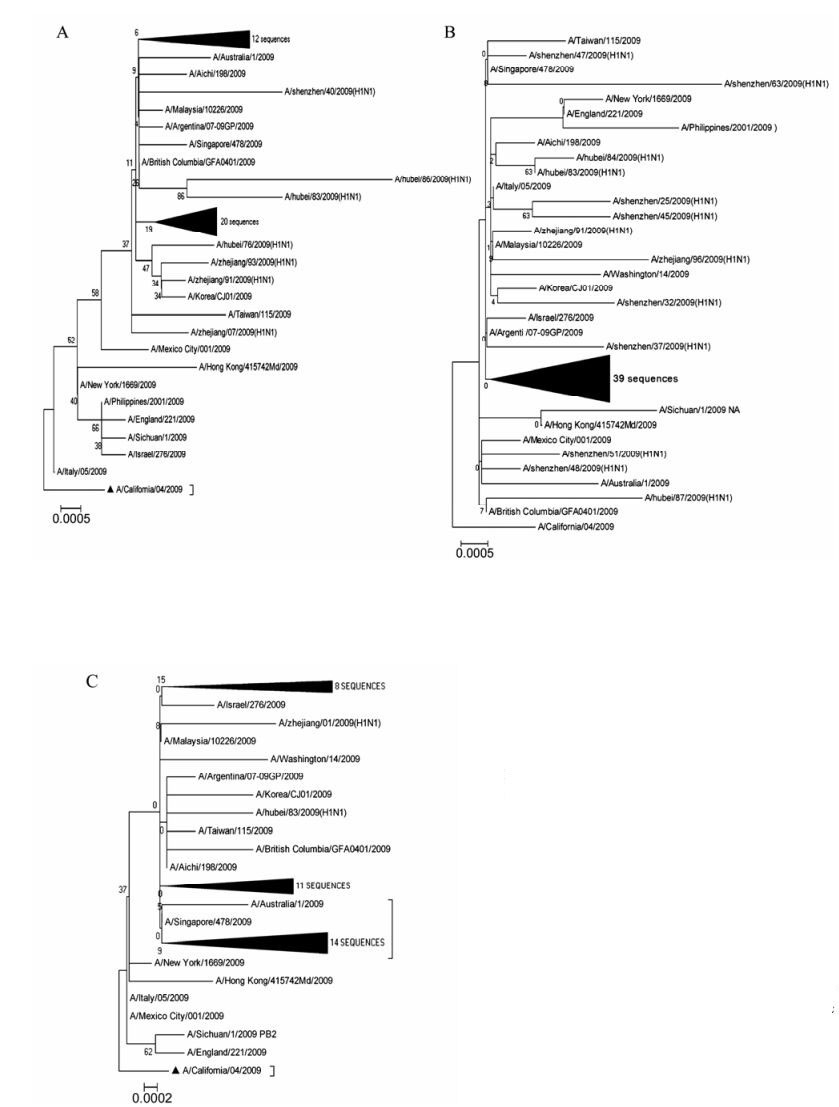