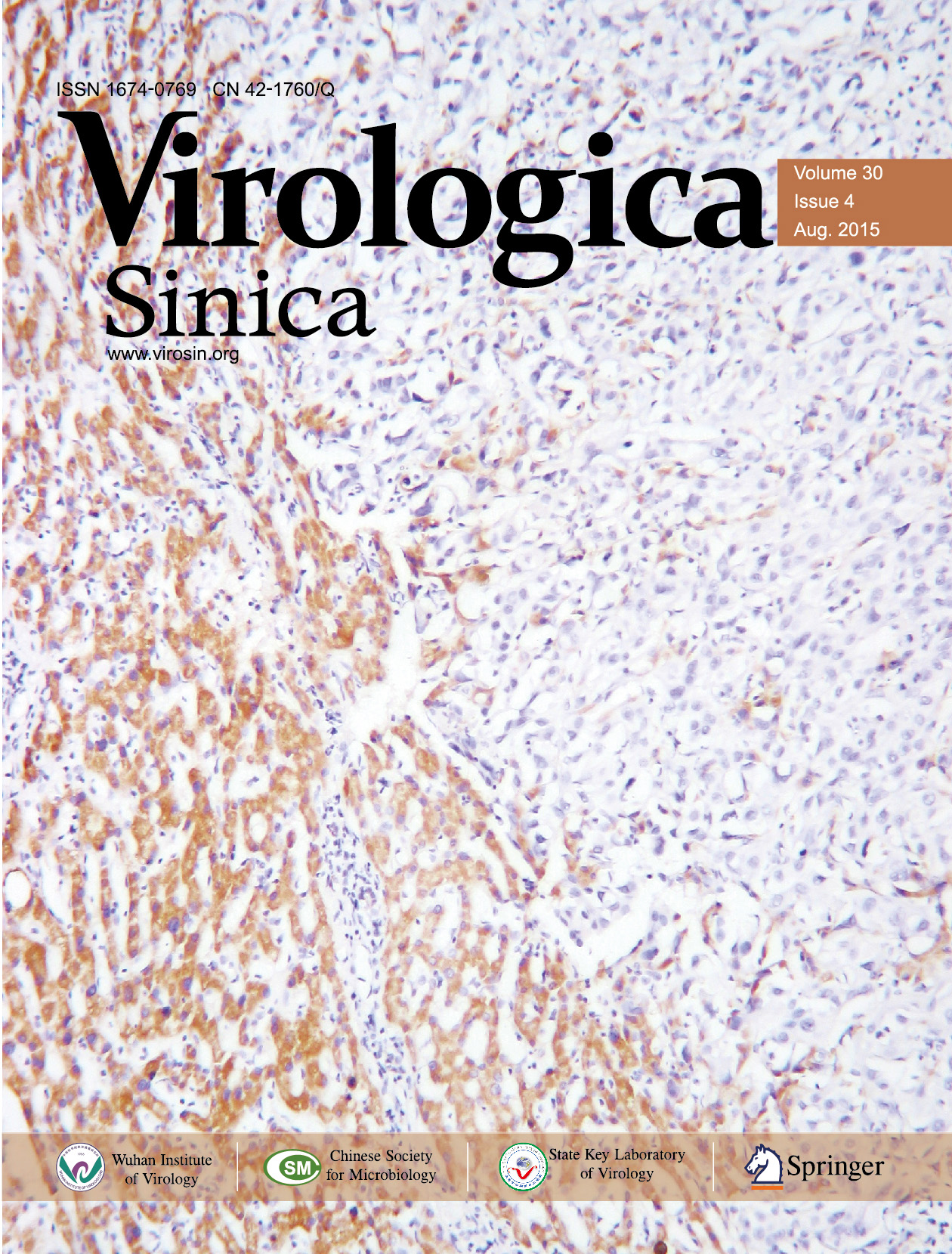 The outcome of hepatic B virus (HBV) infection is the result of complex interactions between replicating HBV and the innate/adaptive immune system. As an important lectin complement pathway activator, human ficolin-2 is secreted from liver cells and contributes to the clearance of viral infections and lysis of enveloped virions, which has been implicated as an anti-infection innate immune molecule. In this issue, a research group lead by Drs. Xiao- Lian Zhang and Fengling Luo, investigated the serum and liver tissue ficolin-2 levels, in a cohort of individuals with chronic HBV infections, hepatocellular carcinoma (HCC) and liver cirrhosis. And their findings suggest that serum and intrahepatic ficolin-2 levels may be considered as one of the indicators for the response of chronic HBV infection, HCC and cirrhosis. The cover image shows the decreased ficolin-2 expression in HCC cells compared to adjacent normal hepatic cells from HCC patients. See page 249–260 for details. 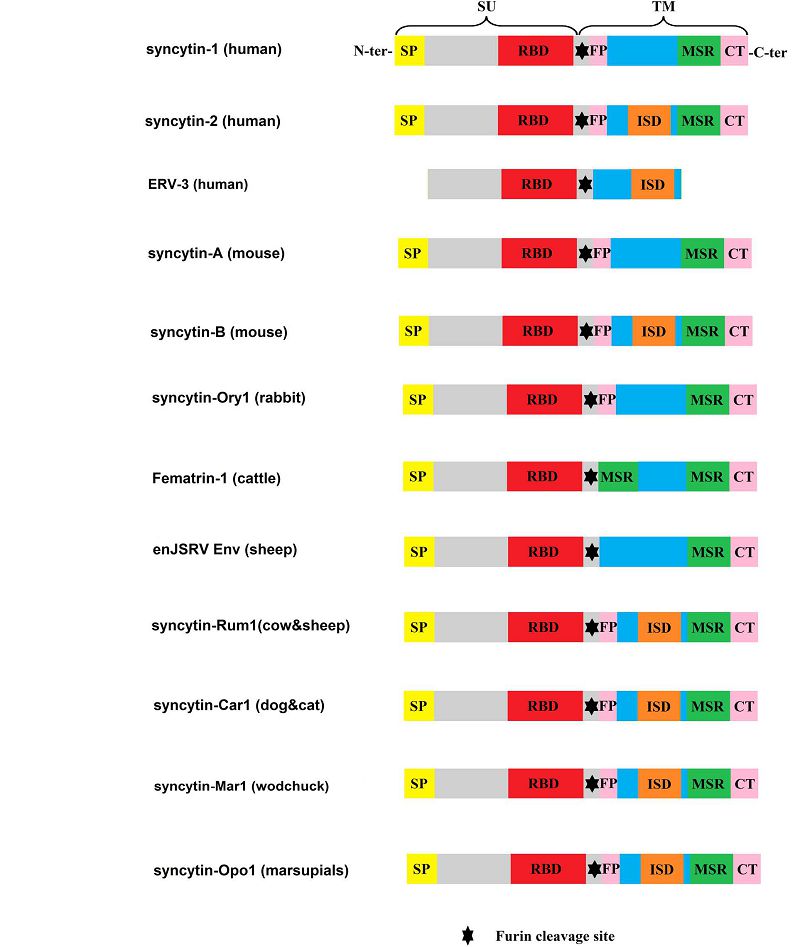 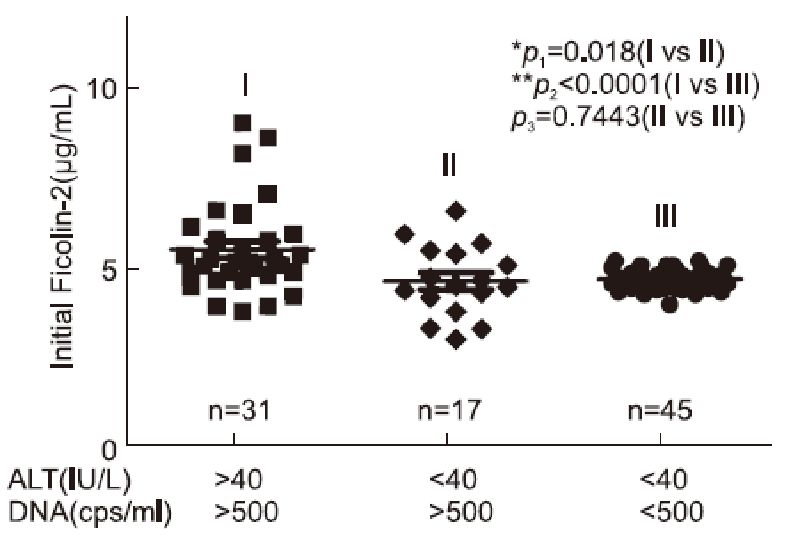 Tielong Chen, Yilan Hu, Quanquan Ding, Jing Yu, Fubing Wang, Fengling Luo and Xiao-Lian Zhang. Serum ficolin-2 concentrations are significantly changed in patients with hepatitis B virus infection and liver diseases[J]. Virologica Sinica, 2015, 30(4): 249-260. doi: 10.1007/s12250-015-3605-4.
Human ficolin-2 is an important lectin complement pathway activator that is secreted from liver cells and has been implicated as an anti-infection innate immune molecule. However, the role of ficolin-2 protein and its dynamic changes over the course of and in the prognosis of chronic hepatitis B (CHB) and hepatocellular carcinoma (HCC) remain unclear. In this study, we analyzed ficolin-2 protein expression in a cohort of individuals with CHB infection, HCC and cirrhosis. A sandwich enzyme-linked immunosorbent assay (ELISA) method was used to measure serum ficolin-2 concentrations. Ficolin-2 expression in liver tissues was detected by immunohistochemical staining. Serum ficolin-2 concentrations in CHB patients were significantly higher than in healthy controls and HBV carriers. After 48 weeks of routine amelioration liver function treatment, serum ficolin-2 concentrations decreased and were positively correlated with favorable alanine aminotransferase (ALT), HBV DNA and HBeAg-seroconversion outcomes. Interestingly, we observed much lower expression of serum and intrahepatic ficolin-2 in HCC and cirrhosis compared with healthy controls. Our findings suggest that serum and intrahepatic ficolin-2 levels may be considered one of the indicators for the response of chronic HBV infection, HCC and cirrhosis. 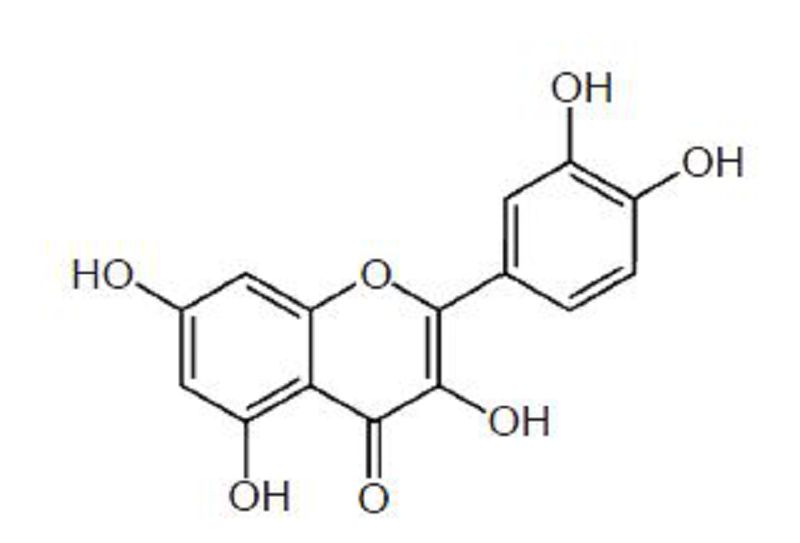 Zhikui Cheng, Ge Sun, Wei Guo, Yayun Huang, Weihua Sun, Fei Zhao and Kanghong Hu. Inhibition of hepatitis B virus replication by quercetin in human hepatoma cell lines[J]. Virologica Sinica, 2015, 30(4): 261-268. doi: 10.1007/s12250-015-3584-5.
Hepatitis B virus (HBV) infection is one of the most serious and prevalent viral diseases in the world. Although several anti-HBV drugs have been used clinically, their side and adverse effects limit treatment efficacy. Therefore, it is necessary to identify novel potential anti-HBV agents. The flavonol quercetin has shown activity against some retroviruses, but its effect on HBV remains unclear. In the present study, quercetin was incubated with HepG2.2.15 cells, as well as HuH-7 cells transfected with an HBV plasmid. Quercetin was shown to significantly reduce Hepatitis B surface antigen (HBsAg) and Hepatitis B e antigen (HBeAg), secretion and HBV genomic DNA levels in both cell lines. In addition, co-incubation with lamivudine (3TC), entecavir (ETV), or adefovir (Ade) further enhanced the quercetin-induced inhibition of HBV replication. This inhibition was partially associated with decreased heat shock proteins and HBV transcription levels. The results indicate that quercetin inhibited HBV antigen secretion and genome replication in human hepatoma cell lines, which suggests that quercetin may be a potentially effective anti-HBV agent. 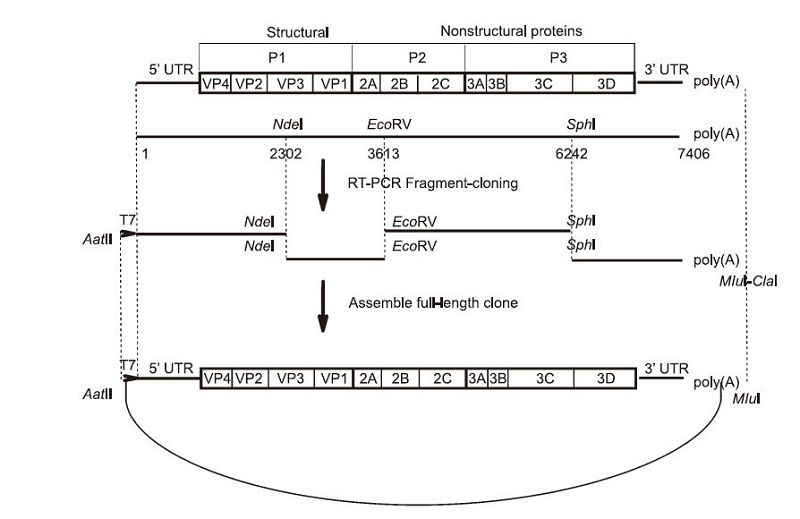 Chenglin Deng, Xiaodan Li, Siqing Liu, Linlin Xu, Hanqing Ye, Cheng-Feng Qin and Bo Zhang. Development and characterization of a clinical strain of Coxsackievirus A16 and an eGFP infectious clone[J]. Virologica Sinica, 2015, 30(4): 269-276. doi: 10.1007/s12250-015-3610-7.
Coxsackievirus A16 (CA16) is one of the major causes of hand, foot, and mouth disease (HFMD) worldwide, which is a common illness that affects children. The frequent occurrence of HFMD outbreaks has become a serious public health problem in Asia. Therefore, it is important to understand the pathogenesis and replication of CA16. In this study, a stable infectious cDNA clone of an epidemic strain of Coxsackievirus A16 (CA16) was assembled, and subsequently a reporter virus (eGFP-CA16) was constructed by inserting the eGFP gene between the 5'- UTR and the N-terminus of VP4, with the addition of a 2A protease cleavage site (ITTLG) at its C-terminus. This was transfected into Vero cells to generate infectious recombinant viruses. The growth characteristics and plaque morphology, in vitro, in mammalian cells were found to be indistinguishable between the parental and recombinant viruses. Although the eGFP-CA16 showed smaller plaque size as compared to recombinant CA16, both were found to exhibit similar growth trends and EC50 of NITD008. In summary, this stable infectious cDNA clone should provide a valuable experimental system to study CA16 infection and host response. The eGFP-CA16 is expected to provide a powerful tool to monitor eGFP expression in infected cells and to evaluate the antiviral activity of potential antiviral agents in the treatment of CA16 infections. 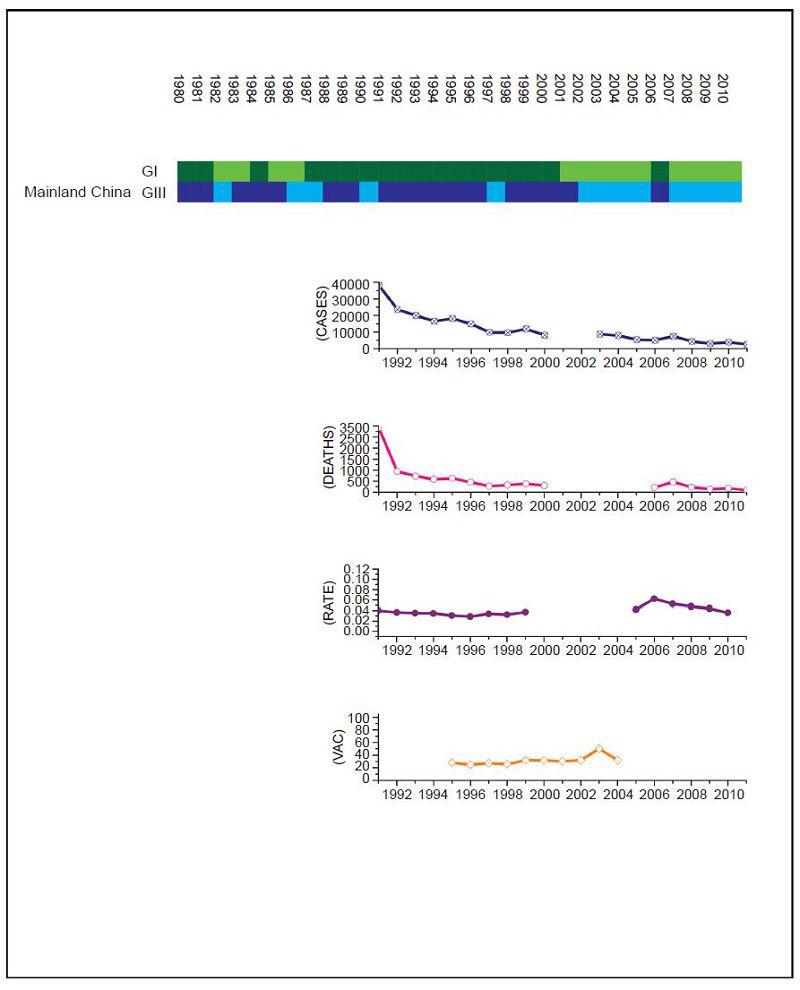 Na Han, James Adams, Wei Fang, Si-Qing Liu and Simon Rayner. Investigation of the genotype Ⅲ to genotype Ⅰ shift in Japanese encephalitis virus and the impact on human cases[J]. Virologica Sinica, 2015, 30(4): 277-289. doi: 10.1007/s12250-015-3621-4.
Japanese encephalitis is a mosquito borne disease and is the leading cause of viral encephalitis in the Asia-Pacific area. The causative agent, Japanese encephalitis virus (JEV) can be phylogenetically classified into five genotypes based on nucleotide sequence. In recent years, genotype I (GI) has displaced genotype III (GIII) as the dominant lineage, but the mechanisms behind this displacement event requires elucidation. In an earlier study, we compared host variation over time between the two genotypes and observed that GI appears to have evolved to achieve more efficient infection in hosts in the replication cycle, with the tradeoff of reduced infectivity in secondary hosts such as humans. To further investigate this phenomenon, we collected JEV surveillance data on human cases and, together with sequence data, and generated genotype/case profiles from seven Asia-Pacific countries and regions to characterize the GI/GIII displacement event. We found that, when comprehensive and consistent vaccination and surveillance data was available, and the GIII to GI shift occurred within a well-defined time period, there was a statistically significant drop in JEV human cases. Our findings provide further support for the argument that GI is less effective in infecting humans, who represent a dead end host. However, experimental investigation is necessary to confirm this hypothesis. The study highlights the value of alternative approaches to investigation of epidemics, as well as the importance of effective data collection for disease surveillance and control.

Mei-Niang Wang, Xing-Yi Ge, Yong-Quan Wu, Xing-Lou Yang, Bing Tan, Yu-Ji Zhang and Zheng-Li Shi. Genetic diversity and temporal dynamics of phytoplankton viruses in East Lake, China[J]. Virologica Sinica, 2015, 30(4): 290-300. doi: 10.1007/s12250-015-3603-6.
Phytoplankton viruses are important components of aquatic ecosystems. However, their prevalence and genetic diversity in marine and freshwater systems are largely under estimated owing to the immense size of water bodies and limitations in virus discovery techniques. In this study, we conducted a 1-year survey of phytoplankton virus communities by collecting surface water monthly from an inland lake (East Lake) in China between May 2012 and April 2013. We examined four phytoplankton viruses, i.e., myoviruses, podoviruses, siphoviruses, and phycodnaviruses, and seven sets of primers were used to target conserved genes within these four species. In this year-long investigation, a total of 358 different virus-related sequences from four virus families were obtained. All virus families were detected in all months, except for cyanopodoviruses, which were only identified during eight of the 12 months surveyed. Moreover, virus abundance and diversity changed dynamically over time. Phylogenetic analysis revealed that the majority of viral sequences from East Lake, China displayed distinct clustering patterns compared with published sequences. These results supported the existence of a highly diverse and unique phytoplankton virus community in East Lake, China.
Letter

Identification and genomic analysis of a novel member of Microviridae, IME-16, through high-throughput sequencing 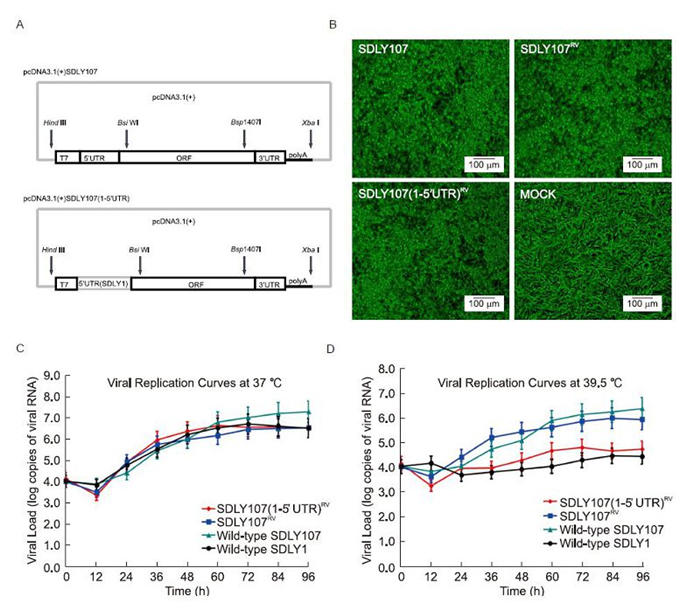 Construction and characterization of infectious cDNA clones of enterovirus 71 (EV71)

Ying-wei Ma, Shu-bin Hao, Le-le Sun, Jing Li, Qiao Qiao, Feng Gao, Li Zhao, Xue-jie Yu, Zhi-yu Wang and Hong-ling Wen. Construction and characterization of infectious cDNA clones of enterovirus 71 (EV71)[J]. Virologica Sinica, 2015, 30(4): 305-308. doi: 10.1007/s12250-015-3614-3.
In this report, we presented the construction of an infectious full-length clone and a recombined EV71 cDNA clone, from which the RNA transcripts could result in CPE in transfected cells. Furthermore, we also found that the 5′UTR of EV71 could influence the replication of EV71, potentially acting as a determinant of the virulence of EV71. Our results provide important insights into the pathogenic mechanisms of EV71-related diseases. 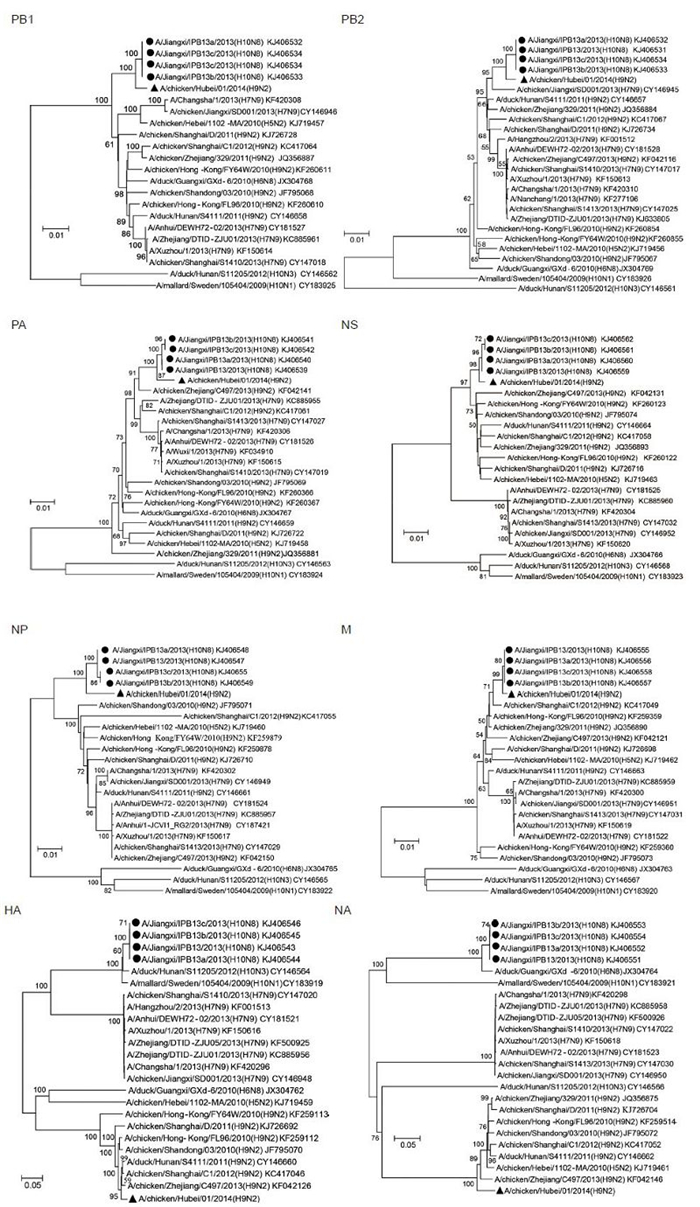 Ning Wang, Zheng Ruan, Yun Wan, Bo Wang, Si-Hua Zhang and Xing-Yi Ge. Identification of a novel strain of influenza A (H9N2) virus in chicken[J]. Virologica Sinica, 2015, 30(4): 309-312. doi: 10.1007/s12250-015-3616-1.
We identified a novel strain of influezna A H9N2 virus infection in chicken in China. Genomic and phylogenetic investigation revealed that the internal genes of the novel H9N2 virus strain were closely related to the emerging human H10N8 virus. These results suggest that the chicken H9N2 virus may be the internal gene source of the novel human H10N8, and through one or two step reassortment events could generate the precursor of the novel human H10N8. This data provides further evidence to address the hypothesis of avian origin of the novel human H10N8. However, the reassortment processes of the poultry H9N2 virus with other subtype influenza A viruses have not been characterized. More research of AIV surveillance and genetic analysis is required to better understand the origin of the emerging influenza virus. 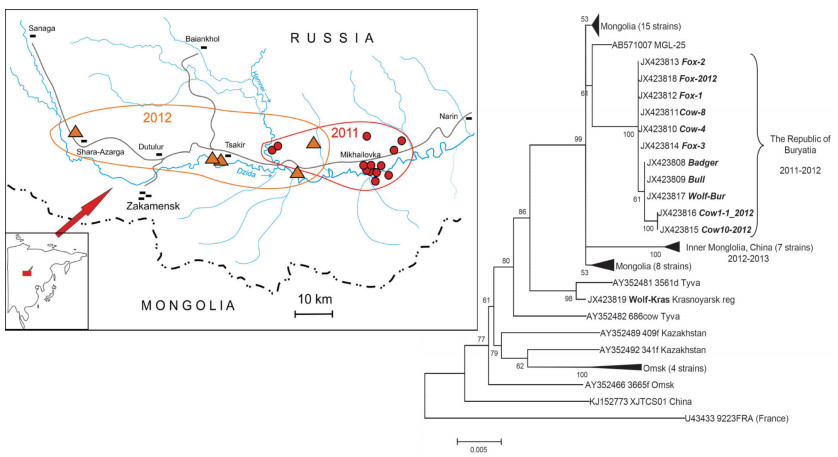 A new outbreak of fox rabies at the Russian–Mongolian border

Renat V. Adelshin, Olga V. Melnikova, Yulia N. Trushina, Alexander D. Botvinkin, Tatyana I. Borisova, Evgeny I. Andaev, Dmitry B. Verzhutsky, Albert S. Khangazhinov and Sergey V. Balakhonov. A new outbreak of fox rabies at the Russian–Mongolian border[J]. Virologica Sinica, 2015, 30(4): 313-315. doi: 10.1007/s12250-015-3609-0.
The main aim of this study is to determine whether the recent fox rabies outbreaks represent an occasional fluctuation in the borders of rabies virus habitat or it isa step toward widespread dissemination of fox rabies in Asia. According to data presented at the conference “Towards the elimination of rabies in Eurasia” (Fu, 2008; Gruzdev, 2008; Seimenis, 2008) at the beginning of the twenty-first century, fox rabies was largely unknown in the Far East while being endemic in Eastern Europe. Further, the incidence of fox rabies decreased in Central and Western Europe, while a progression occurred in the Middle East and Central Asia. Therefore, further researches are necessary on the intermediate zone between the two different rabies virus lineages in Central Asia.