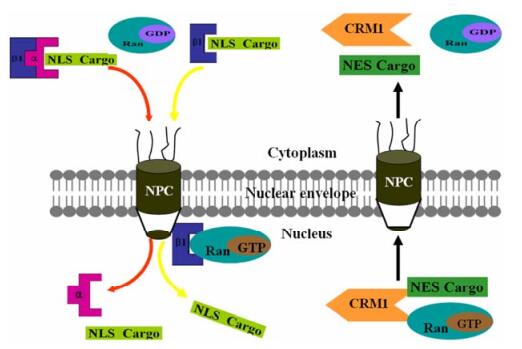 The Nucleocytoplasmic Transport of Viral Proteins*

DING Qiong, ZHAO Lei, Hong GUO and Alan C. ZHENG. The Nucleocytoplasmic Transport of Viral Proteins*[J]. Virologica Sinica, 2010, 25(2): 79-85. doi: 10.1007/s12250-010-3099-z.
Molecules can enter the nucleus by passive diffusion or active transport mechanisms, depending on their size. Small molecules up to size of 50-60 kDa or less than 10 nm in diameter can diffuse passively through the nuclear pore complex (NPC), while most proteins are transported by energy driven transport mechanisms. Active transport of viral proteins is mediated by nuclear localization signals (NLS), which were first identified in Simian Virus 40 large T antigen and had subsequently been identified in a large number of viral proteins. Usually they contain short stretches of lysine or arginine residues. These signals are recognized by the importin super-family (importin α and β) proteins that mediate the transport across the nuclear envelope through Ran-GTP. In contrast, only one class of the leucine-rich nuclear export signal (NES) on viral proteins is known at present. Chromosome region maintenance 1 (CRM1) protein mediates nuclear export of hundreds of viral proteins through the recognition of the leucine-rich NES.
Research Article

Zhong-zi LOU, Zhi-yong LI, Gang WANG, Jian-qiang LI, Xi LAN, Xue-rui LI, Xiang-ping YIN, Ji-xing LIU and Si-dang LIU. Prokaryotic Expression and Potential Application of the Truncated PCV-2 Capsid Protein*[J]. Virologica Sinica, 2010, 25(2): 86-97. doi: 10.1007/s12250-010-3111-7.
Three pairs of specific primers were designed to amplify the F2-1, F2-2 and XF2-2 truncated sequences of ORF2 which encodes the capsid protein of porcine circovirus type 2 (PCV-2). The F2-1 sequence had most of the NLS region of ORF2, but the F2-2 and XF2-2 genes had the NLS region deleted. Truncated genes were subcloned into pET-32a(+) vectors to construct recombinant fusion expression vectors. The vectors were then transformed into Rosetta(DE3) E. coli and expressed by induction of IPTG. Expressed proteins were detected by western blotting and ELISA. The protein with best immunoreactivity was confirmed and selected, then utilized to inoculate SPF rabbits to prepare polyclonal antibodies. The protein and prepared polyclonal antibody were utilized to detect sera samples against PCV-2 from Shandong province and PCV-2 particles in PK-15 cells. In our study, three recombinant fusion proteins were successfully obtained, and the molecular weights of fusion proteins were 35.9 kDa, 33.6 kDa and 38.6 kDa respectively detected by SDS-PAGE. All of the proteins showed positive reaction with anti-PCV-2 antisera, and His-XF2-2 showed better immunoreactivity than the others. The protein of His-XF2-2 was coated as antigen in ELISA to detect the seroprevalence of PCV-2 in certain districts of Shandong province, the seropositivity rate was 27.7 % (73/264). Specific fluorescence and positive signals for PCV-2 could be detected in PK-15 cells inoculated with PCV-2 with the participation of prepared antibodies against His-XF2-2 in IFA and IPMA. Experimental results indicated that the truncated PCV-2 ORF2 gene containing most of the NLS region was successfully expressed in E. coli, and His-XF2-2 was demonstrated to have better immunoreactivity with anti-PCV-2 antisera than the other two fusion proteins. His-XF2-2 and prepared polyclonal antibodies against it had a satisfactory capability in detecting PCV-2 infection.

Li-chun WANG, Song-qing TANG, Yan-mei TANG, Hong-lin ZHAO, Cheng-hong DONG, Ping-fang CUI, Shao-hui MA, Long-ding LIU and Qi-han LI. A Comparison of the Biological Characteristics of EV 71 C 4 Subtypes from Different Epidemic Strains*[J]. Virologica Sinica, 2010, 25(2): 98-106. doi: 10.1007/s12250-010-3102-8.
The comparative analysis of the biological characterization and the genetic background study of EV71 circulating strains is commonly recognized as basic work necessary for development of an effective EV71 vaccine. In this study, we sequenced five EV71 circulating strains, isolated from Fuyang, Hefei, Kunming and Shenzhen city of China and named them FY-23, FY-22, H44, K9 and S1 respectively. The sequence alignment demonstrated their genotypes be C4. The genetic distance of the VP1 gene from these isolates suggested that they were highly co-related with genetic identity similar to other previously reported EV71 strains in China. Additionally, these strains were identified to display some obvious proliferation dynamics and plaque morphology when propagated in Vero cells. However, a distinctive difference in pathogenic ability in neonatal mice was found. Some differences in cross neutralization test & immunogenic analysis were also found. All these results are related to the biological characterization of circulating EV71 strains in China and aid in the development of an EV71 vaccine in the future. 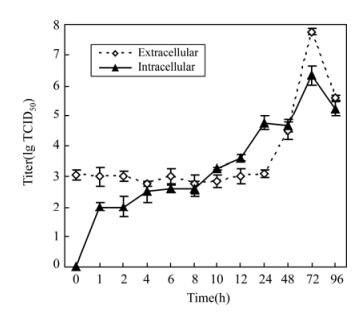 Zhe Ren, Chuan-hai Zhang, Lian-jun Wang, Yun-xia Cui, Ren-bin Qi, Chong-ren Yang, Ying-jun Zhang, Xiao-yi Wei, Da-xiang Lu and Yi-fei Wang. In vitro Anti-viral Activity of the Total Alkaloids from Tripterygium hypoglaucum against Herpes Simplex Virus Type 1*[J]. Virologica Sinica, 2010, 25(2): 107-114. doi: 10.1007/s12250-010-3092-6.
Herpes simplex virus type 1 (HSV-1) is a commonly occurring human pathogen worldwide. There is an urgent need to discover and develop new alternative agents for the management of HSV-1 infection. Tripterygium hypoglaucum (level) Hutch (Celastraceae) is a traditional Chinese medicine plant with many pharmacological activities such as anti-inflammation, anti-tumor and antifertility. The usual medicinal part is the roots which contain about a 1% yield of alkaloids. A crude total alkaloids extract was prepared from the roots of T. hypoglaucum amd its antiviral activity against HSV-1 in Vero cells was evaluated by cytopathic effect (CPE) assay, plaque reduction assay and by RT-PCR analysis. The alkaloids extract presented low cytotoxicity (CC50 = 46.6 μg/mL) and potent CPE inhibition activity, the 50% inhibitory concentration (IC50) was 6.5 μg/mL, noticeably lower than that of Acyclovir (15.4 μg /mL). Plaque formation was significantly reduced by the alkaloids extract at concentrations of 6.25 μg/mL to 12.5 μg/mL, the plaque reduction ratio reached 55% to 75% which was 35% higher than that of Acyclovir at the same concentration. RT-PCR analysis showed that, the transcription of two important delayed early genes UL30 and UL39, and a late gene US6 of HSV-1 genome all were suppressed by the alkaloids extract, the expression inhibiting efficacy compared to the control was 74.6% (UL30), 70.9% (UL39) and 62.6% (US6) respectively at the working concentration of 12.5μg/mL. The above results suggest a potent anti-HSV-1 activity of the alkaloids extract in vitro. 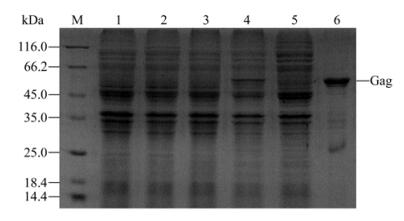 Jian WANG, Hong-yan GUO, Rui JIA, Xuan XU, Juan TAN, Yun-qi GENG and Wen-tao QIAO. Preparation of BFV Gag Antiserum and Preliminary Study on Cellular Distribution of BFV*[J]. Virologica Sinica, 2010, 25(2): 115-122. doi: 10.1007/s12250-010-3110-8.
Viruses (e.g. Human immunodeficiency virus, Human simplex virus and Prototype foamy virus) are obligate intracellular parasites and therefore depend on the cellular machinery for cellular trafficking. Bovine foamy virus (BFV) is a member of the Spumaretrovirinae subfamily of Retroviruses, however, details of its cellular trafficking remain unknown. In this study, we cloned the BFV gag gene into prokaryotic expression vector pET28a and purified the denaturalized Gag protein. The protein was used to immunize BALB/c mouse to produce antiserum, which could specifically recognize the BFV Gag protein in BFV-infected cells through western blot assay. Additionally, these results demonstrated that both the optimal and suboptimal cleavage of Gag protein occur in BFV-infected cells. Subsequently, the Gag antiserum was used to investigate subcellular localization of BFV. In immunofluorescence microscopy assays, colocalization microtubules (MTs) and assembling viral particles were clearly observed, which implied that BFV may transport along cellular MTs in host cells. Furthermore, MTs-depolymerizing assay indicated MTs were required for the efficient replication of BFV. In conclusion, our study suggests that BFV has evolved the mechanism to hijack the cellular cytoskeleton for its replication. 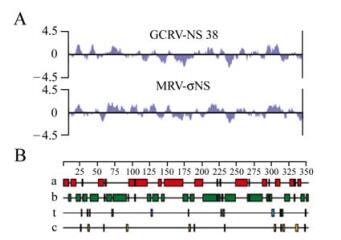 Ling SHAO, Chao FAN, Ewa Maj and Qin FANG. Molecular Characterization of Nonstructural Protein NS38 of Grass Carp Reovirus*[J]. Virologica Sinica, 2010, 25(2): 123-129. doi: 10.1007/s12250-010-3115-3.
Viral nonstructural proteins in both enveloped and non-enveloped viruses play important roles in viral replication. Protein NS38 of Grass carp reovirus (GCRV), has been deduced to be a non-structural protein, and, consistent with other reoviruses, is considered to cooperate with the NS80 protein in viral particle assembly. To investigate the molecular basis of the role of NS38, a complete protein was expressed in E.coli for the first time. It was found that there is a better expression of NS38 induced with IPTG at 28 ℃ rather than 37 ℃. In addition, the antiserum of NS38 prepared with purified fusion protein and injected into rabbit could be used for detecting NS38 protein expression in GCRV infected cell lysate, while there is not any reaction crossed with purified virus particle, confirming NS38 is not a component of the viral structural protein. The result reported in this study will provide evidence for further viral protein-protein and protein-RNA interaction in dsRNA viruses replication. 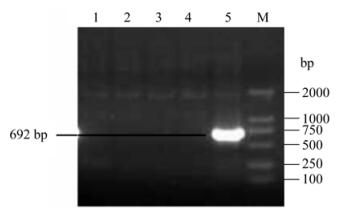 Qing-chan ZHANG, Dong-min ZHAO, Hui-jun GUO and Zhi-zhong CUI. Isolation and Identification of a Subgroup A Avian Leukosis Virus from Imported Meat-type Grand-parent Chickens*[J]. Virologica Sinica, 2010, 25(2): 130-136. doi: 10.1007/s12250-010-3095-3.
An exogenous avian leukosis virus (ALV) strain SDAU09C1 was isolated in DF-1 cells from one of 240 imported 1-day-old white meat-type grand parent breeder chicks. Inoculation of SDAU09C1 in ALV-free chickens induced antibody reactions specific to subgroup A or B. But gp85 amino acid sequence comparisons indicated that SDAU09C1 fell into subgroup A; it had homology of 88.8% - 90.3% to 6 reference strains of subgroup A, much higher compared to other subgroups including subgroup B. This is the first report for ALV of subgroup A isolated from imported breeders. 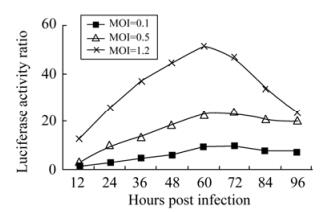 In vivo Inhibition of NAS Preparation on H9N2 Subtype AIV*

Ruo-feng SHANG, Jian-ping LIANG, Zhong-yuan NA, Hong-jun YANG, Yu LU, Lan-ying HUA, Wen-zhu GUO, Ying CUI and Ling WANG. In vivo Inhibition of NAS Preparation on H9N2 Subtype AIV*[J]. Virologica Sinica, 2010, 25(2): 145-150. doi: 10.1007/s12250-010-3082-8.
NAS preparation, a kind of Chinese herbal medicine found by the Yunnan Eco-agricultural Research Institute, has potential antiviral activity. In this paper, the inhibiting effect of NAS preparation on H9N2 subtype Avian influenza virus (AIV) was investigated in vivo. Chickens infected with H9N2 virus were treated with NAS preparation for 4 days. The virus was then detected by hemoagglutination (HA) test and reverse transcription polymerase chain reaction (RT-PCR). The results showed that no H9N2 virus could be detected at the 7th day when the chickens were treated with 0.2g/kg/d or 0.1g/kg/d of NAS preparation. However the virus could be detected in other chickens without NAS preparation treatment. This result suggested that NAS preparation may be a potential drug candidate to control infection of H9N2 subtype AIV in chickens.